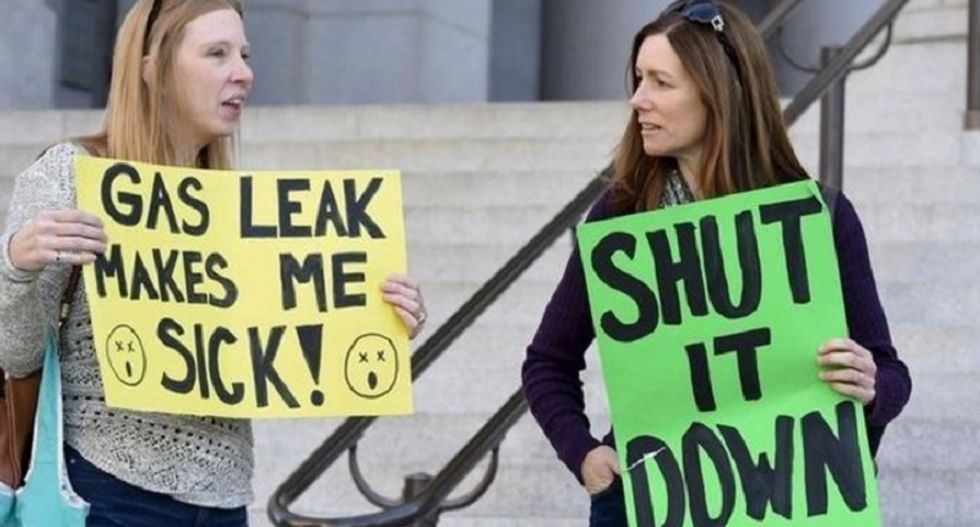 California's attorney general sued Southern California Gas Co on Tuesday over a huge methane leak near Los Angeles, escalating legal action sparked by an underground pipeline rupture that has forced thousands of residents from their homes since October.

The latest civil complaint accuses the utility, a division of San Diego-based Sempra Energy of violating state health and safety laws by failing to promptly control the escaping gas and report the leak to authorities.

The lawsuit also cites environmental damage caused by the uncontrolled release of 80,000 metric tons of methane, the prime component of natural gas and a far more potent greenhouse gas than carbon dioxide.

The leak stems from an underground pipeline rupture at the company's 3,600-acre (1,457-hectare) Aliso Canyon natural gas storage field. The largest such leak ever in California, at its height it accounted for a fourth of all methane emissions statewide.

"The impact of this unprecedented gas leak is devastating to families in our state, our environment and our efforts to combat global warming," Attorney General Kamala Harris said.

The lawsuit in Los Angeles County Superior Court amends a civil complaint brought in December by the Los Angeles city attorney and later joined by Los Angeles County. It seeks unspecified civil penalties and court orders requiring the utility to immediately take all steps necessary to mitigate the leak, repair the damage and prevent future discharges.

Several attempts to halt the methane release have failed, but the company said it hopes to finally plug the leak by the end of the month through a relief well now being drilled.

"We are working hard to both stop the leak and to address our neighbors' concerns," the company said in a statement, adding it would "respond to the lawsuit "through the judicial process."

Last week, the South Coast Air Quality Management District filed a separate suit against SoCal Gas seeking civil penalties of up to $250,000 a day for each of six pollution-related health and safety code violations.

The stench of methane fumes has sickened scores of people and was prompting the relocation of more than 6,600 households from the Porter Ranch community at the edge of the crippled underground gas storage field.

More than 20 private lawsuits have been filed on behalf of some of those residents.

The company also has accelerated the withdrawal of surplus gas supplies stored beneath the site to diminish underground pressure on the ruptured well pipe.

Don Jr was questioned by New York AG in Trump Org investigation — and Ivanka is next: report

On Tuesday, MSNBC reported that two of former President Donald Trump's children are being questioned as part of a probe by New York State Attorney General Letitia James, into the tax and business practices of the Trump Organization — after considerable effort to try and get out of sitting for depositions.

Former federal prosecutor Harry Litman broke down the significance of the story.

A teacher in Burlington, Wisconsin, who was allegedly involved in the Capitol riot on January 6, 2021, has found a new position at a school in Michigan, according to the Racine Journal Times.

"A history teacher who openly questioned the validity of the 2020 presidential election and then traveled to Washington D.C. for the infamous Jan. 6, 2021, election protest has resigned from his position at Burlington High School," Scott Williams of the of the Racine Journal Times reported.

"Kelli Ward, the chairwoman of the Arizona Republican Party, and Kelly Townsend, a state senator, were both said to have expressed concerns to Mr. Trump’s lawyers in December 2020 about participating in a plan to sign on to a slate of electors claiming that Mr. Trump had won Arizona, even though Joseph R. Biden Jr. had won the state," said the Times.