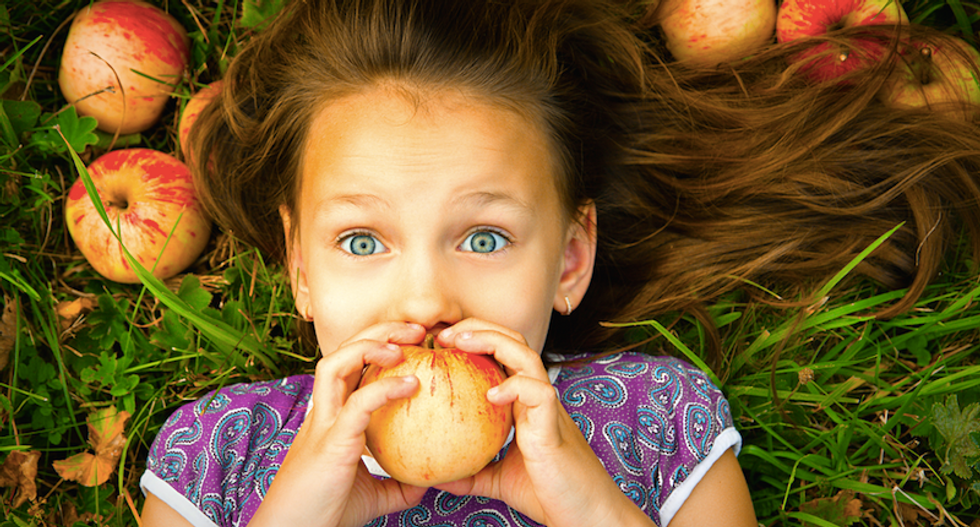 Girl lies on the ground with apples (Shutterstock)

“Girls are like apples on trees. Their fathers are the farmers, whose job is to care for them. He must protect his apples from pests and disease. He must guard them against thieves who may pick his apples prematurely. Neither those at the top nor those at the bottom can help their location. But, when each reaches peak ripeness, it is the farmer’s job to harvest that fruit and give it to whom he will, to those in need. So there is nothing wrong with the apples still on the tree and nothing wrong with the boys who seek them. But it is the farmer’s duty to provide for both, in due season.”

Perhaps one of the most disturbing images on the Internet recently comes from the Christian fundamentalist website, “Let Them Marry.” Formerly called, “True Love Doesn’t Wait (It Marries)”, the pro-early marriage site is a Quiverfull ministry dedicated to teaching fathers the truly biblical path to marriage for their young sons and daughters. 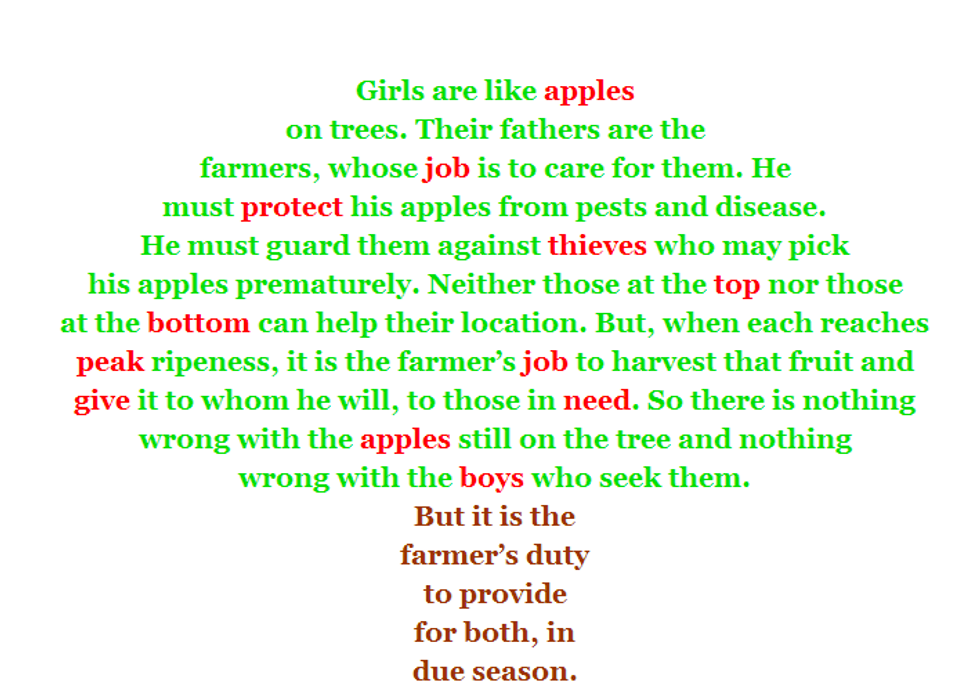 The site’s main author, and patriarch extraordinaire, Vaughn Ohlman, believes Christian youth are not marrying early enough because Christian dads are way too picky about which “boys” they’re willing to give their “girls” to in marriage:

We believe that not only should most people marry, they should marry in their youth. The Bible speaks of the “wife of thy youth” (Prov. 5:18; Is. 54:6; Mal. 2:14-15) and “children of the youth” (Ps. 127:4). Scripture also speaks of not letting children pass the flower of their age (1 Cor. 7:36) ... Leaving the physically mature young man struggling with fornication and leaving the physically mature young woman wallowing in fruitless, barren celibacy—these are both unscriptural and ungodly actions.

The onerous quote above, which likens daughters to apples and their fathers to farmers, is an apt representation of the creepy objectification of young girls and women by their own fathers which pervades the Christian purity movement. The message is clear: the value of a young woman is in her virginity — a consumable commodity owned by her future husband, kept in trust by Daddy.

Vaughn Ohlman is a sick man with a twisted sense of fatherly love.

Suzanne Titkemeyer, administrator of the No Longer Quivering blog, frequently features the bizarre rantings of “Let Them Marry” in the “Quoting Quiverfull” section and has had numerous interactions with Vaughn, whom she describes as, “a nonsensical pain in the ass who refuses to accept logic, facts and legitimate figures,” reports that Ohlman was interested in a girl at his church and her daddy judged him not good enough and rejected him.

(That story is all kinds of messed up, but the good news is … whew, she dodged a bullet!)

Of the “girls are like apples” quote, Titkemeyer says, “Girls and women are NOT consumable objects without thoughts, feelings, humanity or needs.”

Cindy Kunsman, author of the Spiritual Abuse Survivors blog, Under Much Grace, says this comparison of girls to fruit falls short on several counts. “The words belie the writer, for they demonstrate the grandiosity of the patriarch who is cast as the farmer as well as the theme of the eldest head of household in this national folk religion. Everyone and everything derives its existence from the patriarchal, head-of-household farmer who seems to be entirely responsible and omnipotent over flora, fauna, and other adult men, too.”

Kunsman adds, “A good father loves and cares for his daughters and sees these apples of his eye as beloved people, not objects. This meme reduces girls (who are assumed to be daughters if not all women) to products for consumption and men the devourers. But even the suitors who desire them (because of nature, not the farmer’s nurture) are subject to bounded choice. It appears that young men procure apples to devour, but they are also subjects of the farmer. It’s amazing to me just how many dynamics of thought reform and spiritual abuse this homegrown meme illustrates in just a short narrative.”

“Girls are like apples on trees” … a nauseating idea, indeed. Sadly, it’s classic Quiverfull and no surprise coming from the hyper-patriarchal Christian culture which views women as property and children as commodities.