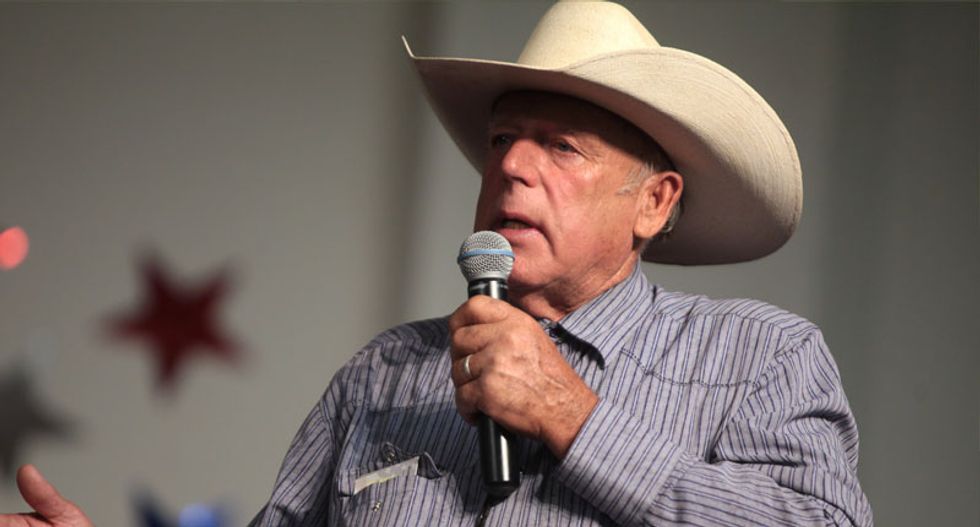 By Sam Levin, The Guardian

After Ammon Bundy called on final occupiers to leave refuge, his father sent a letter to government officials declaring armed militia would not back down

Cliven Bundy, the Nevada rancher who led a standoff with the federal government in 2014, wants the protesters in Oregon to stand their ground -- directly defying the message of his son, Ammon.

Days after militia leader Ammon Bundy, now in jail in Portland, Oregon, called on the final four occupiers at the Malheur national wildlife refuge to surrender and go home, the elder Bundy sent a letter to government officials declaring that the armed militia would not be backing down.

“This is notice that We the People of Harney County and also We the People of the citizens of the United States DO GIVE NOTICE THAT WE WILL RETAIN POSSESSION OF THE HARNEY COUNTY RESOURCE CENTER,” Cliven wrote in the letter, which he sent on Monday to the local sheriff, Oregon governor Kate Brown and the White House.

The armed militia in Oregon renamed the federally protected refuge the “Harney County Resource Center” and for weeks since the occupation began said their goal was to return the public lands to the control of local people.

But since 11 people associated with the militia were arrested -- and occupation spokesperson LaVoy Finicum was shot and killed by state troopers -- leader Ammon Bundy has called on the holdouts to end the protest.

Cliven Bundy, however, declared today that he wants the opposite to occur.

“What this is saying is that Cliven Bundy is taking control of things,” Cliven said in an interview from his ranch in Bunkerville, Nevada on Monday afternoon. “If we don’t retain it, then we’ve lost everything that we’ve done in the last two months. We’re not gonna give up.”

He added: “This is not Ammon’s message. This is my message ... We’ve made a decision to retain it ... The feds are going to get out of there.”

The letter demands further: “Remove all federal and state policing agents out of Harney County.”

Cliven said he suspected that his imprisoned son felt pressured to urge the remaining occupiers to go home. “That’s what he said, but I never believed it. I don’t think that’s what’s in his heart. He probably got his arm twisted.”

Cliven said he has not talked to his son since he was arrested last Tuesday. Ammon, his brother Ryan, and a group of activists are facing federal felony charges for their roles in the occupation of government buildings, which began on 2 January to protest the imprisonment of two local ranchers.

Carol Bundy, Cliven’s wife, said in an interview that it was crucial the occupation persevere. “Ammon does not want bloodshed. But he wants the message to continue,” said Carol. “We’ve made a statement. We’ve made a stand. And we’d like to hold out.”

The four remaining occupiers have posted videos online saying they refused to leave unless they had assurances that they would not face charges. The four left are David Fry, a 27-year-old Ohio resident, Jeff Banta of Elko, Nevada, and husband and wife Sean and Sandy Anderson of Riggins, Idaho.

Speaking through his lawyer after his first court appearance last week, Ammon issued a statement that said: “To those who remain at the refuge, I love you. Let us take this fight from here ... Please stand down. Go home and hug your families. This fight is ours for now, in the courts.”

Cliven Bundy's letter, as posted on Facebook, can be seen below.