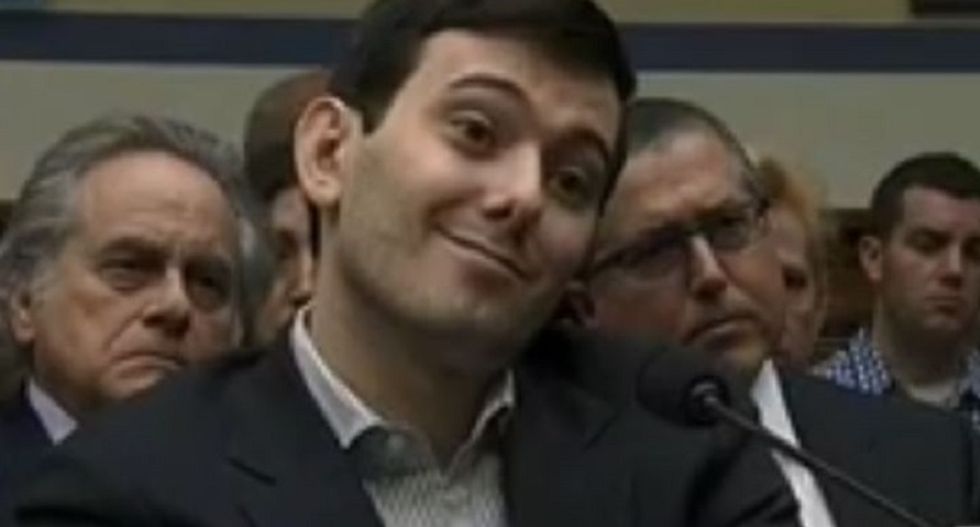 "Pharma Bro" Martin Shkreli appeared before Congress and smirkingly declined to answer any questions though he is not under indictment for the subject matter he was being questioned for.

Shkreli appeared Thursday morning before the House Committee on Oversight and Government Reform. When prodded by South Carolina Rep. Trey Gowdy (R), Shkreli, the former CEO of Turing Pharmaceuticals invoked his Fifth Amendment rights, even when asked about such seemingly benign topics as his purchase of a $2 million Wu-Tang Clan album.

Shkreli became widely hated when he raised the price of a life-saving drug used to fight infection in cancer and AIDS patients by 5,000 percent. He was arrested in December on federal securities fraud charges.

Gowdy and Maryland Rep. Elijah Cummings (D) tried multiple times to get Shkreli to answer questions, both pointing out Shkreli's constant attention-seeking, sitting for interviews and prolific Twitter use. Gowdy and Cummings engaged in what appeared to be a "good-cop bad-cop" method, but Shkreli, with his attorney sitting behind him, remained largely silent and smirking.

"In this case, Mr. Shkreli made a number of public comments himself raising legitimate questions about his intentions," Cummings said, countering Shkreli's tactic of invoking the Fifth Amendment to avoid answering any questions. "Honestly I did not know whether he was even going to show up today. So it's nice to see you."

Cummings asked Shkreli to use any influence he may still have over his former pharmaceutical company "to press them to lower the price of these drugs."

"You can look away if you like," Cummings said, as Shkreli sneered. "But I wish you could see the faces of people... who cannot get the drugs that they need. And by the way, it's the taxpayer. Somebody's paying for these drugs... It's the taxpayers that end up paying for some of them. And those are our constituents."

As Cummings spoke to him about his unique opportunity to change the pharmaceutical industry for good, Shkreli openly appeared to laugh at him and look away.

Shkreli was escorted out of the hearing after insisting he would remain silent. He later tweeted, "Hard to accept that these imbeciles represent the people in our government."

Watch Shkreli before the Congressional committee being questioned by Gowdy and Cummings, here: