Ding dong, the dynasty is dead: Say goodbye to Jeb and the Bush family 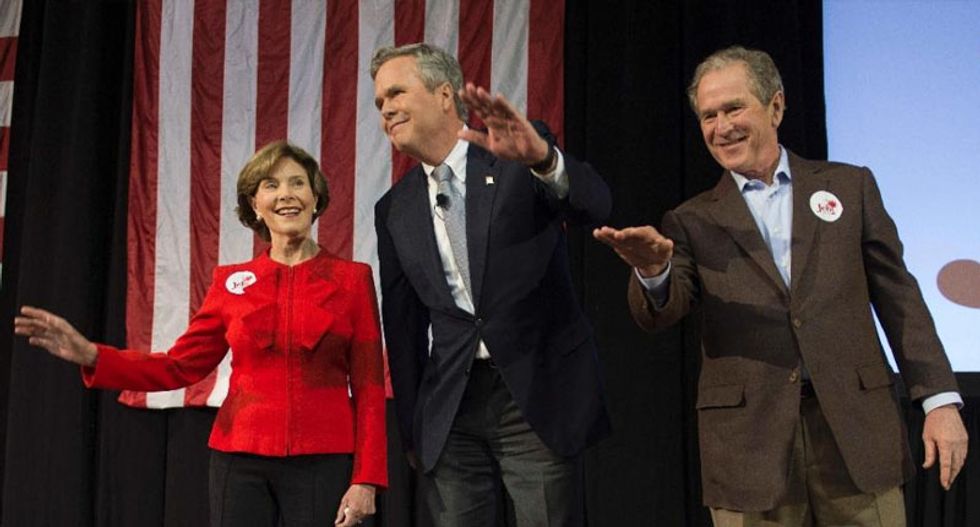 Former US President George W. Bush waves with his wife Laura as he stands with his brother and Republican presidential candidate Jeb Bush during a campaign rally in Charleston, South Carolina, February 15, 2016 (AFP Photo/Jim Watson)

In announcing the suspension of his campaign, Jeb Bush couldn’t have found a more apt expression for his departure from a contest that was beyond his ken than “I congratulate my competitors who are remaining on the island”. The 2016 Republican presidential primary is a thing forged in madness; as befitting the functional illogic of a reality TV show, it doesn’t make a lick of damn sense beyond itself, but the results cannot be appealed. Jeb has been voted off the island; he is the weakest link; goodbye.

There were signs long ago that he would fail to gain traction among Republican voters despite his political pedigree and all his campaign cash – not necessarily deterministic, but they were there.

The publication of his book Immigration Wars: Forging An American Solution in 2013 is one such sign: even at the time, the book seemed to be a bad idea at best. It hit bookshelves just as the Republican National Committee was putting together a postmortem on the 2012 election that noted – again – that the party needed to appeal to Latino voters.

Yet Bush’s book repudiated his own history of being an inclusive conservative politician who championed in-state college tuition for the children of undocumented immigrants, drivers licenses for the undocumented and supported the Dream Act , so long as it wasn’t implemented by Barack Obama’s executive action. The author Bush argued against any path to citizenship for those who entered this country illegally.

Bush hadn’t even announced at that point – and Trump hadn’t yet rocketed to front runner status by stoking nativist paranoia – and already he’d tied himself into a knot on what everyone knew would be one of the biggest issues of the 2016 campaign. From then on, no position that Bush advocated could escape the label of flip-flopper because he had flip-flopped on immigration. In the purity test of any Republican primary, Jeb was already the establishment, already dangerously a RINO , but now he was also infinitely changeable on the most important policy issue of the day. He might take a hardline on some issue today, but what about tomorrow?

Then came the campaign rollouts: Bush launched The New Bush Experience by gathering around him every establishment neoconservative from either the Reagan or the Bush II years – a soulless sludge of amoral warmongering boobery that, ethically-speaking, resembled the invitees to a North Korean state dinner. (They are the sort of people who put on jackets covered with epaulettes and ribbons from armchair campaigns before mounting their rider mower and treating the lawn like they’re about to daisy-cutter Vietnam.) Bush insisted he was his own man by announcing that he’d listen to advice from the people who belonged to at least one other institutional failure.

And any question of Bush hearing their counsel but keeping his own fell flat when he stumbled over multiple answers about whether the Iraq War was a good idea. This was the one question he had to have an answer for – that, indeed, it would be absurd for any American to not have an answer for – and he flubbed it repeatedly for days, before arriving at the self-evident: he would not have invaded . The fourth time was the charm, but it wasn’t charming.

When it couldn’t conceivably get any worse, Donald Trump entered the race. Blaming Jeb’s failure on him devalues just how badly Bush could’ve simply screwed his campaign up on his own. Trump was the accelerant, but Bush had to fumble and drop a lit cigarette into his pants cuff before the Trump-branded gasoline could do its work.

Trump didn’t make Bush reply to a mass shooting with, “ Stuff happens ”. He didn’t make Bush, a man married to a Mexican woman and the father of mixed-race children who almost exclusively speaks Spanish in his own home , say that we shouldn’t live in a multicultural society . He didn’t make Bush say that people in this country needed to work longer hours . He didn’t tell Bush that Obama’s daughter’s name was “Malala” (which is the name of the Nobel peace prize winning Taliban shooting victim turned women’s rights activist ), not “Malia”.

Yes, Trump just did his own thing, and ridiculed Jeb, but if a tree falls in a forest and there’s no one around to call it weak, it still falls down.

None of that even gets to all those weird, doomed attempts by Bush’s campaign to make him go viral: pictures of Bush flashing the liners to his blazers , showing his JEB! emblem on a white background. Or the picture of a somewhat pathetic and forlorn Jeb standing in a hoodie , staring at the camera, as if pleading to know when this ends. Or him taking a selfie in front of the “Peachoid” . Or that last, harrowing Twitter picture, of a gun with his name engraved on it ; Bush simply tweeted, “America.”

So, for as much as surrounding circumstances might have sped up the process, the bumbling began with the campaign itself, and there was nothing Jeb or his advisors could do to stop it.

But, perhaps despite the sadness on his face as he took his leave of the race, and despite his wife’s tears, and despite the fact that, by comparison, he is probably a less odious person than many of the men left in the race, there’s no need to feel pity. The Bush dynasty lost this once; given what it’s done for America in the past, that might ultimately be a good thing.

The Bush clan is a pack of jackals that has skittered among the tall grass of politics now for four generations. Granddad Prescott was a senator who made his cash at Brown Brothers Harriman , in part by investing in Germany’s financial rebuilding on the road to WWII. George HW Bush worked at Brown Brothers Harriman, too, before becoming an oil wildcatter, then a congressman, the head of the CIA (where he overlooked domestic anti-communist terrorism ) and finally president, where he pardoned away the dregs of Iran-Contra and solidified the post-Watergate blueprint for America’s refusal to prosecute its greatest political criminals.

You know all about Jeb’s brother, George W “Endless War” Bush. Jeb’s son, George P Bush, once reportedly crashed a car into his ex-girlfriend’s yard after failing to gain entrance via a window (her family opted not to press charges) and is now Texas Land Commissioner – after raising over $3m dollars for the race before he even had a challenger and on the basis of his extensive experience as Bush family member. Maybe Jeb’s failure means his son won’t strive for even higher office. Or maybe not.

After four generations of participating in Republican politics and appealing to Republican voters, the conservative base prefers someone who wants to build impossible walls, expel 11 million people, start trade wars with countries we distrust and bomb anything that moves. There is some consolation in seeing a dynasty of genteel political malfeasance and mass death undone by a TV showman who recognizes that the audience now wants the same product, just bigger, louder and cruder.

But this is the small justice that people seek when they know the system will forever fail them. There is no glee here, just resignation. Besides, interpreting events like that again focuses on Trump, when the visceral truth of the Bush campaign was that we finally saw the rot of their dynasty move to the surface, like cheap composite plywood puncturing through a deep wood veneer.

Jeb Bush was one of the family, and he failed. And if there is one, stark emotional legacy of the Jeb 2016 experience, it is this: despite coming from all that power and money, Jeb Bush ran a campaign so wracked with failure and so thoroughly inept that he could move millions of Americans beyond their richly earned contempt for him and his family. By the end, Jeb Bush actually made people feel sorry for him.