Fox guest: Republicans shouldn't 'bother' with blacks because they vote like Democratic slaves 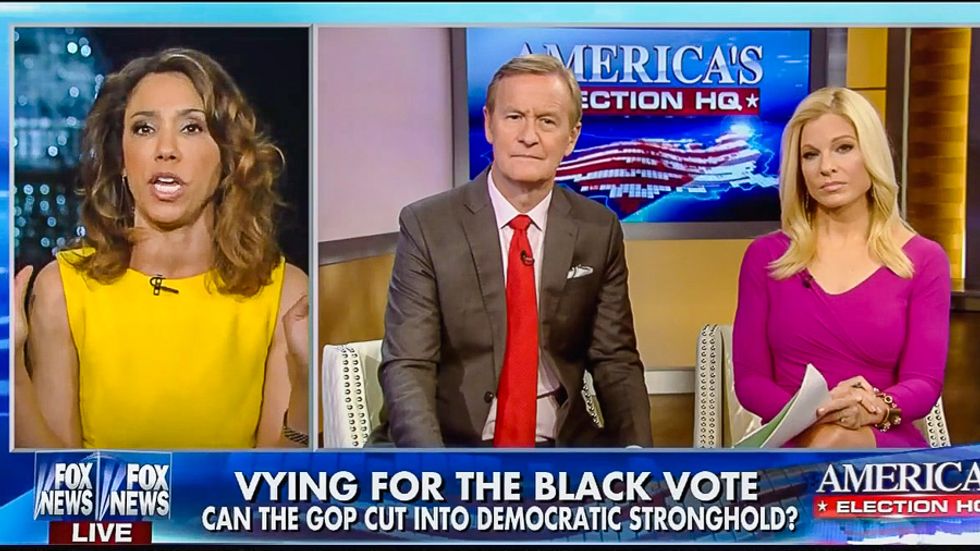 Crystal Wright, founder of the Conservative Black Chick blog, told Fox News that African-Americans were behaving like slaves to the Democratic Party.

Fox & Friends hosts Steve Doocy and Anna Kooiman asked Wright on Monday if there was a Republican candidate who could take away a significant number of black votes from Democrats.

"It's Donald Trump!" Wright exclaimed. "Because Donald Trump is the only person bothering to talk to black people and ask for their vote."

Wright noted that Trump had a black spokesperson and had promised to help the black community find jobs by deporting undocumented immigrants.

According to Wright, many blacks supported Democrats because the candidates were essentially "buying" their votes.

"I think it's so sad when it comes to the black vote," she lamented. "Blacks have shown a slavish support for the Democrat [SIC] Party for over 50 years."

"And part of me wonders if the Republican Party should even bother asking for the black vote," Wright added, "because black Americans seem to like being political dummies. We're the only race that has voted lock, stock and barrel for the same party for over 50 years."

The blogger argued that Hillary Clinton was "owning the black vote."

"And I think she is owning it because, 'Oh, she was married to the first black president,'" Wright said. "That's all Democrats have to do. It's a sad state of affairs for blacks when all they have to do is pander and insult black Americans decade in and decade out, and we keep coming back for more misery.""

"A black candidate like Carson, Herman Cain, you can just kiss the black vote goodbye," she insisted. "Because automatically, blacks are going to call you an Uncle Tom."

"It's that pathetic? Can't we do better?"