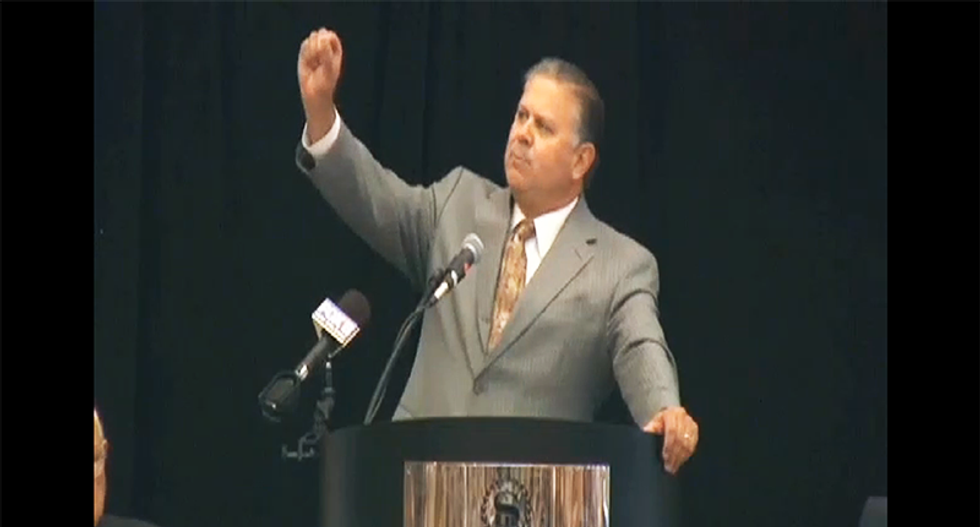 Republican Sheriff Newell Normand might be a good ol' boy from Jefferson Parish in Louisiana, but that didn't stop him from lobbing a dose of reality at the Metropolitan Crime Commission's annual awards luncheon on Tuesday. According to a video of the speech posted by WUVE, Normand bad-mouthed the GOP's Beltway establishment and elected officials, notorious tax cutter Grover Norquist and called former Louisiana Gov. Bobby Jindal an "idiot," equating him to cult leader Jim Jones.

Normand fully admits that he endorsed and supported Jindal when he ran for governor, but that Jindal's leadership destroyed the state that Normand holds dear. "What a mess. Bobby Jindal was a better cult leader than Jim Jones," he said to laughter and applause from the audience. "We drank the elixir for eight years. We remained in a conscious state. We walked to the edge of the cliff and we jumped off and he watched us and guess what? Unlike Jim Jones he did not swallow the poison. What a shame."

Normand accused Jindal of working after his reign to rewrite history when the rest of the state doesn't "even know what history is." Much like other states with Republican governors like Kansas and Oklahoma, Louisiana faces a substantial budget shortfall, to the tune of $2.5 billion. Jindal is telling the world that he did a phenomenal job as governor and Normand is furious about it.

"We have to just say no!" Normand said. "I'm a Republican but I'm not a hypocrite. We have to look at ourselves critically as a party and figure out where we are and what we're going to be about." He admitted to the audience that he was partly at fault because he "endorsed that idiot," but said that it was time to move toward solutions. Due to the budget problems, Normand says that the state will be cutting funding to mental health which causes more problems for law enforcement officers. The state also plans to close five state prisons that houses 8,000 inmates.

He even denounced following the policy recommendations of Grover Norquist, who makes Republican candidates sign a pledge not to raise taxes. "We better get concerned. We better wake up. We better be honest," Normand said. "We better talk about the issues because we are going to pay the price." He continued saying that the state cannot cut its way to a balanced budget because doing so will cut the resources necessary for law enforcement officers like him to do their job safely and effectively. "We do not need to face the stupidity of our leadership as it relates to how we're going to face balancing this budget and talking about these silly issues because we're worried about what Grover Norquist thinks. To hell with Grover Norquist! I don't care about Grover Norquist!" he said to audience applause. "We're worried about the ATR report card," he said, referencing Norquist's group Americans for Tax Reform.

When it comes to the Republican party in Washington, D.C., Normand wants them to stop attacking. He cited Medicaid expansion which would cover the cost for things like drug addiction and mental health that officers often witness on the streets and in prisons. "And I have to listen to my Republican counterparts talk about gobbledigook. Blah, blah blah... And I'm so sick and tired of hearing: Obama, Obama, Obama. You know how much intellect it takes to blame something on somebody else? This much!" he said holding his hand up to indicate zero. "Propose a solution. Work together." He closed by comparing politics to being married and asked how many people in the audience refuse to compromise in their marriages.

You've got to see this video: