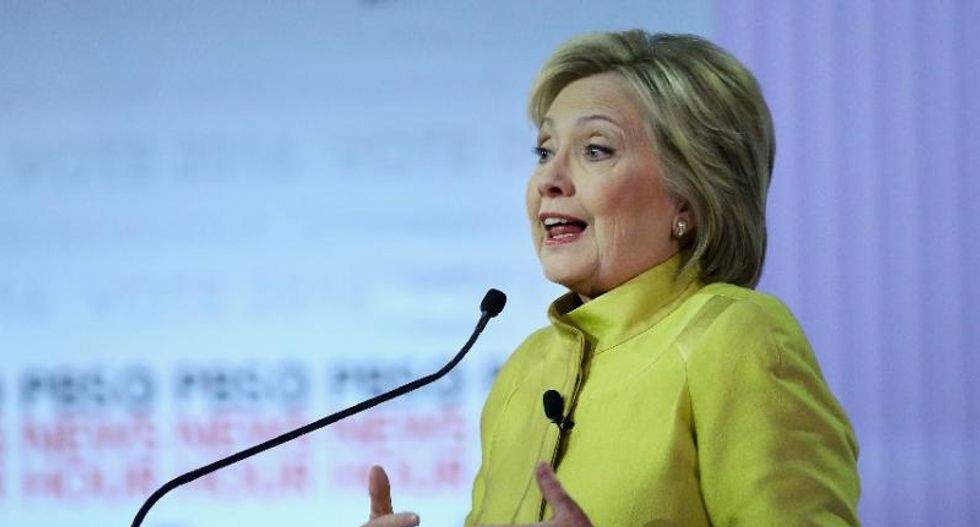 Democratic presidential candidate Hillary Clinton defended her paid speeches to Wall Street, saying in an interview that aired on Friday that they would not soften her campaign pledges for tougher regulation.

The former U.S. Senator from New York and secretary of state is under pressure from rival candidate Bernie Sanders, who has made her Wall Street ties a top campaign issue and called for her to release transcripts of her remarks. Clinton was reportedly paid millions in appearance fees after leaving the State Department.

Asked whether she could assure U.S. voters that the speeches would not undermine her calls to rein in the financial industry, Clinton told MSNBC: "Absolutely."

"I'm on the public record. I told them what I'm going to do. I said I'm going to go after big banks that pose a systemic risk. I want you to hold me accountable for that because I will do that exactly," she told the network's "Morning Joe" program.

The New York Times, in an editorial late on Thursday, urged Clinton to release the transcripts, saying "voters have every right to know what Mrs. Clinton told these groups." According to the paper, Clinton earned $11 million in 2014 and the first quarter of 2015 from 51 speeches to banks and other groups and industries.

Clinton has said she will release copies of her remarks when other presidential candidates do the same.

On Friday, she said President Barack Obama's fundraising from Wall Street had not prevented him from enacting Dodd-Frank financial services reforms after the 2007-2009 financial crisis.

Clinton reiterated her position that regulations must go farther, saying, "Dodd-Frank is great. It gives us a foundation. It doesn't go far enough. We need to look at these other entities that pose systemic risks, as well."

As far as so-called unwinding of banks that pose a risk, she added: "We're going to do in an orderly way so there will not be any surprises."

Sanders, a U.S. senator from Vermont, is vying with Clinton for the Democratic nomination in the November presidential election.

"I do not receive many millions of dollars from Wall Street or the pharmaceutical industry or other powerful, wealthy interests in this country, and have not given speeches for hundreds of thousands of dollars to Wall Street," Sanders told a Chicago rally on Thursday, the Washington Post reported.

The next Democratic nominating contest is on Saturday in South Carolina.