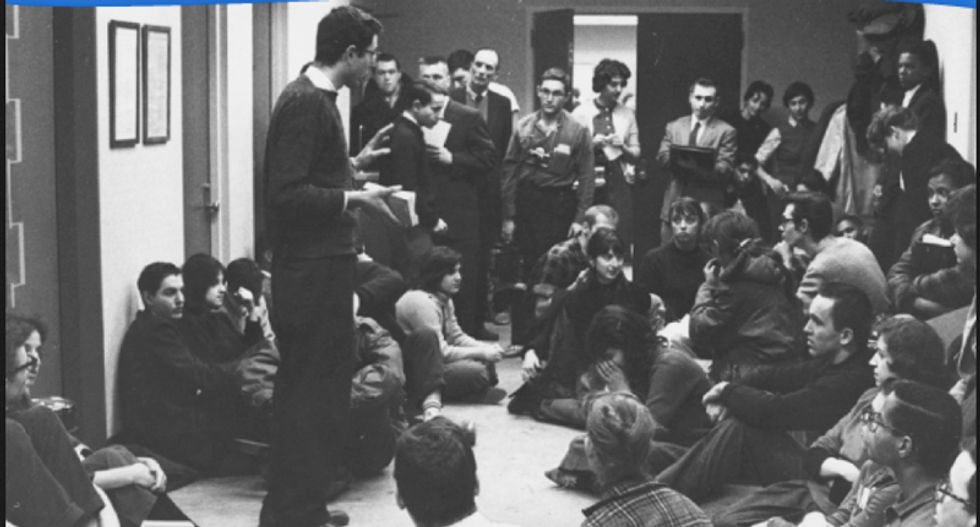 On Saturday afternoon the Washington Post’s Jonathan Capehart walked back a widely circulated “debunking” of a photo of Bernie Sanders from his days at the University of Chicago during the civil rights sit-ins of 1962. The original story, published Thursday, asserted with total certainty that the photo was not of Bernie Sanders but rather Bruce Rappaport:

Stop sending around this photo of ‘Bernie Sanders’

But that’s not Bernie Sanders in the photo. It is Bruce Rappaport.

Classmates of the two men started raising concerns about the discrepancy last year. According to Time, four University of Chicago alumni told the magazine in November that they believed the man to be Rappaport, also a student activist, who died in 2006. At the time of the story, the photo was still captioned as Bernie Sanders in the University of Chicago’s photo archive. But the picture’s caption has since been changed.

But something inconvenient happened to the famed centrist pundit after the story published; the man who actually took the photo over 50 years ago came out and said he was certain it was Bernie Sanders:

"I photographed Bernie a second time after he got a haircut, as he appeared next to the Nobel laureate and chancellor Dr. George Beadle. Time Magazine is now claiming it is not Bernie in the picture but someone else. It is Bernie, and it is proof of his very early dedication to justice for African Americans. The CORE sit-in that Bernie helped lead was the first civil rights sit-in to take place in  the North."

In light of this confirmation, Capehart reeled back his original report with a lame "he said, he said" explanation:

Bernie Sanders and the clash of memory

This is a story where memory and historical certitude clash. Where the doubt of a campaign strategist slams up against a university archive. Where the word of a proud photographer conflicts with the pride of an ex-wife and friends. Where the civil rights activism of Bernie Sanders and Bruce Rappaport collide.

First, a little background: Capehart's original report was based on a November 2015 piece in Time about four alums of the University of Chicago who were “raising doubt” on the photo being of Sanders. The Time reporter has effectively retracted his piece based on the new photographs showing Sanders at the location in question:

A Sanders campaign photo may indeed show the candidate...

The contact sheets, reviewed by Time, show pictures of the 21-year-old Sanders sitting on the floor wearing a rough, brown sweater and white shirt in what appears to be the same room as the disputed photo. The clothing Sanders is wearing on the floor in the recently discovered contact sheets looks to be the same as the clothing the young man is wearing in the photo in question.

Moreover, Lyon said that based on their order on the contact sheets, the newly discovered pictures of Sanders were taken immediately after the disputed photo.

In response to this new information, the University of Chicago corrected the photo, changing the caption back to Bernie Sanders. Both Time and the archivists at the University of Chicago, in light of this evidence, corrected their stories. But not Jonathan Capehart, whose original report remains the same sans a link to the most recent post. Still the same headline saying the photo isn't Sanders, and the same unqualified assertions that those who are sharing the photo are spreading a falsehood.

After a barrage of criticism based on this new revelation, Capehart relented, then decided after the original story ran to do some actual journalism, cryptically tweeting out late Friday night:

Quite the crazy day. I've intrvu'd ex-wife of Bruce Rappaport AND the photographer of the disputed "Sanders" photo. Now transcribing… Spent the day doing my job. Reporting. Getting the facts. Thinking before writing. New Bernie photo piece coming soon. Not so cut and dry.

Shouldn’t he have done his reporting and fact-checking before he accused the Sanders campaign of deliberately spreading false misinformation about Sanders' civil rights record? To say nothing of the fact that even the original Time story was not nearly as confident as Capehart asserted. Somehow through a game of reporting telephone, what began as “raising doubt” in the Time piece from November quickly becomes absolute certainty in February, despite the fact that the underlying fact set never changed.

Even if the person in question weren't Sanders—which it almost certainly is—Capehart's piece is a warmed-over hit piece. What motivated him to dust off a story that originally broke three months ago? Ostensibly it was because some unknown number of “Bernie supporters” kept tweeting the photo at him as evidence of his work in civil rights. But Capehart himself admits Sanders' civil rights work at the University of Chicago around 1962 is “not in question,” so why home in on one random photo that a few random people on Twitter bring up?

The official answer, given Capehart’s finger-wagging tone, is that the truth is important and he’s simply trying to correct the record. In fact, it’s an attempt to undermine the two things Sanders needs more than anything right now: people to trust him and African-American voters to like him. Perhaps Capehart believed using his prime op-ed column inches to resurrect a three-month-old story to shame a few Sanders partisans on Twitter was a good use of his pundit capital, but it’s more likely he just wanted to further muddy the waters on Sanders’ civil rights record in the runup to the largely African-American South Carolina primary.

To wit: Capehart goes out of his way to cast aspersions on the Sanders campaign for using the photo in its promotional materials, including a video celebrating the 50th anniversary of the March on Washington in 2013, but then goes on to explain, “the photo was still captioned as Bernie Sanders in the University of Chicago’s photo archive” as of November 2015. Generally, people go off the official labeling of professional archivists. What was the Sanders’ camp supposed to do, go through every photo of him at the University of Chicago and double-check the work of professional archivists?

This is a silly standard and one Capehart doesn’t clearly explain. When Capehart asked why the campaign hadn’t re-edited the video to omit the picture, the campaign's response was basically, well, we don’t really know either way. But Jonathan Capehart wasn’t having any of it. His argument (before it was walked back) ended with this preposterous condemnation:

For a candidate who garnered 92 percent of New Hampshire Democratic voters who said the most important trait for a candidate was that he or she be “honest,” the least his campaign could do is remove that photo from its Tumblr feed and stop physically placing him where he existed only in spirit.

Now it seems Capehart's moralizing tone was wildly misplaced, if not disingenuous. The Sanders camp was right to hedge their bets without making a claim either way, as was Time and the University of Chicago after the mistake was brought to their attention. The Washington Post, despite this new information, still seems content on vaguely walking this story back rather than admitting they had it wrong in the first place.