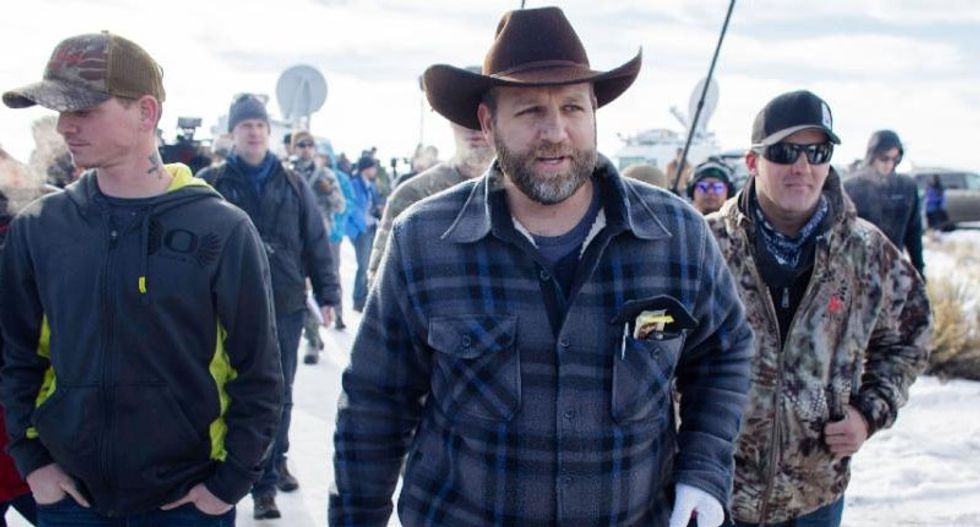 The arrested militiamen of the Oregon refuge occupation have had extensive previous run-ins with the law – and a history of anti-government protests that federal officials are now using against them in court.

In recent filings in federal court in Portland, prosecutors have detailed the criminal histories of the 11 people facing felony charges for their involvement in the armed occupation of the Malheur national wildlife refuge, which began 2 January and continues to drag on this week with no end in sight .

Last Tuesday, militia leader Ammon Bundy was arrested on a remote highway in rural Harney County , occupation spokesperson LaVoy Finicum was shot and killed by police and a number of high-profile participants in the rightwing standoff were taken into custody.

The protesters, who say they seized government buildings to protest federal regulations of public lands, now face charges of impeding federal officers from discharging official duties, which could carry prison sentences of up to six years .

Last week, US magistrate Stacie Beckerman ordered Ammon, his brother Ryan Bundy and three others to remain in custody without bail.

Some of the men, including Ammon, have appealed the bail denials, and a series of new detention hearings are scheduled this week starting Tuesday.

Prosecutors have cited many of their past offenses, arguing that it would be too dangerous to release them while the case moves forward.

Jason Patrick, a 43-year-old Georgia resident and one of the last holdouts at the refuge , faced charges in August 2014 of “making terrorist threats” after he “threatened to kill everyone” inside a Georgia municipal court building, according to prosecutors.

Patrick posted bond in that case and was released, but agreed not to possess weapons – a condition that he has since violated. He was photographed with guns during the occupation, prosecutors noted.

Joseph Oshaughnessy, a 45-year-old Arizona resident now facing charges for his role in the occupation, has previously been arrested for disorderly conduct, domestic violence and drug offenses, according to court records. Oshaughnessy has argued that he was not a member of the militia, but was trying to keep the peace at the refuge .

Brian Cavalier, a 44-year-old Nevada man, has a series of felony convictions that restrict his access to firearms but has nonetheless consistently possessed weapons, prosecutors said. He often referred to himself as Ammon Bundy’s bodyguard.

Duane Ehmer, the Oregon occupier frequently photographed with his horse at the refuge, is a convicted felon banned from possessing firearms – but he, too, was carrying a pistol when he was arrested last week, according to the records. Prosecutors said he also recently posted a photo on Facebook with the threatening caption: “The only way to win a war is to kill enough of the enemy that they do not want to fight anymore.”

After he was arrested last week, Ryan Payne, a 32-year-old Montana man, “claimed to have an absolute duty to prevent the federal government from continuing to manage lands” and “claimed a right to use force to oppose an unlawful arrest”, prosecutors said. He has also repeatedly been involved in armed efforts to oppose the federal government, according to records.

Pete Santilli, the conservative radio host who live-streamed the occupation until his arrest, previously bragged on YouTube about refusing to turn in his guns in violation of a restraining order filed against him. Santilli, who is a vocal supporter of the Bundys, has argued that he was a journalist covering the protests.

Ryan Bundy was convicted of obstructing police in 2008 and again interfered with an arresting officer in 2015, prosecutors wrote in the filings. In the latter case, he reportedly had to be restrained by three court bailiffs attempting to take him into custody on a failure-to-appear warrant.

In arguing against bail for Ammon Bundy, prosecutors cited his repeated social media statements decrying the federal government and his resolve to fight.

Officials on Friday did agree to release Shawna Cox , the one woman arrested at the occupation. She has to wear an ankle bracelet.

Relatives of the jailed Bundys said they had little faith the court proceedings in Portland would be fair or that the judge would grant the men bail.

“You’re not going to get any justice in a federal court,” said Carol Bundy, wife of Cliven Bundy, the Nevada rancher who led the 2014 standoff with the government and on Monday called on the Oregon occupiers to stand their ground .

“They have unlimited power, or they feel that they do,” she continued. “You go in their court with their law and their judges … There will be no justice in there.”

Although Ammon Bundy has said from jail that it is time to continue the fight in the courtroom , his sister Bailey Logue, 24, said she wasn’t confident that a court battle would accomplish much in the Bundys’ fight against federal overreach. “We have to win it out here. If it could’ve been won in the courts, we wouldn’t be here.”