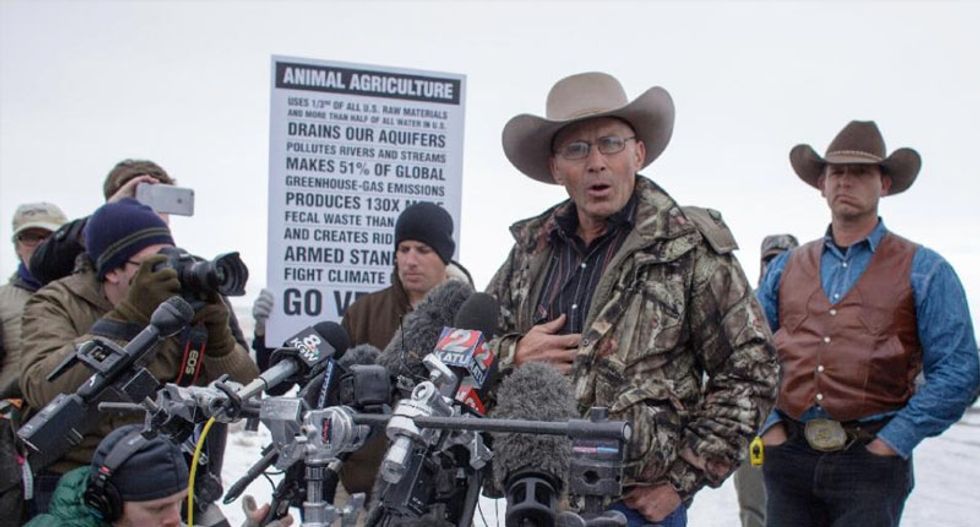 LaVoy Finicum, an Arizona rancher and spokesman for the armed, anti-government militants behind the National Wildlife Refuge occupation in Oregon, was killed by state police in a standoff on a nearby highway last week. But will he go down in history as a martyr that gave his life for a noble cause, or just a moron with a death wish?

To answer that, let’s consider what it means to be a martyr. By definition, a martyr is someone who either a) is killed because of their religious or other beliefs, or b) chooses to be put to death rather than renounce their beliefs. But was anyone actually trying to silence LaVoy Finicum, or demanding that he renounce his beliefs? It appears that it was actually quite the opposite.

Rather than trying to suppress their message, the government pretty much gave the militia free rein over the Malheur National Wildlife Refuge Headquarters with unlimited access to the press. They essentially handed them a national microphone, which many believe wouldn’t have been the case if they were of a different race or nationality. I’d say that’s pretty hospitable treatment from the organization that is supposed to be their oppressor. Finicum was not killed for refusing to renounce his beliefs. He was killed for attempting to shoot officers after breaking the law. Rather than a genuine martyr, LaVoy may have just been a man with something that psychologists call a martyr complex.

A person who has a martyr complex “desires the feeling of being a martyr for his or her own sake, seeking out suffering or persecution because it either feeds a psychological need, or a desire to avoid responsibility.” Finicum’s behavior prior to his demise clearly shows this pattern. For weeks he gave interviews to large media outlets like CNN whereby he expressed his willingness to die in a shootout with law enforcement. It appears that he was not only predicting his own death, but also longing for it.

Why anyone should have a martyr complex is a curious question since it seems to be counterproductive to some of our most fundamental instincts as humans.  How is it that our biological programming—which is designed to survive, reproduce, and raise offspring—gets overridden? The choice to act against genetic interests by sacrificing one’s life may be best explained by a theory put forth by psychologists that suggests it is done in an effort to gain personal significance. In other words, a willingness to die for a cause might be motivated by a desire to be remembered by one’s peers long past death. Their self-sacrifice gains them recognition and prestige amongst their group, allowing them to “live forever” in the minds of those close to them. Perhaps LaVoy Finicum was less of a martyr who was killed for his beliefs, and more of a person who died in an attempt to impress friends and be called a hero by other loony “patriotic” fundamentalists.

But maybe the most important factor in determining if someone was an effective martyr is whether or not their death amplified their message. I think it’s safe to say that most people know that the militiamen occupying the National Wildlife Refuge were anti-government, just like every other redneck militia in America. We have all become very familiar with the right wing paranoia about Obama coming to take our guns and our freedoms. But did Finicum advance that message further or bring anything new to the table?

Due to a massive failure to clearly and simply define their message through news channel appearances and social media, the majority of Americans seem to have no real clue as to the specifics of what the Oregon protest was all about. If one cares to search they will soon find that the countless articles written about the death of Lavoy Finicum make no mention whatsoever of exactly why their group chose to take such extreme actions. The public at large does not know the story of the Hammonds—the father and son ranchers who were sentenced to five years in prison for setting fire to 130 acres of land. And the chances are that they won’t ever, because if there was one thing that the Oregon militiamen flunked at horribly, including Finicum, it was communicating to the country what the hell they were even trying to achieve.

Martyrdom only occurs when an awareness of your cause is created by your death. A martyr is killed because the powers that be want him silenced, not because he yearns to go out in a blaze of glory that will be remembered by his crazy comrades. For these reasons, Lavoy Finicum may ultimately be viewed as more of a moron than a martyr. I do not write these words with joy. It is a tragedy that someone with arguably good intentions had to die without anything positive to come from it. But maybe there is an important lesson to be learned here. If you want to be an agent of change, direct your efforts to delivering your message to the greatest number of people possible, which can be done much more effectively from behind a keyboard or a microphone than through what ultimately amounts to a senseless suicide.