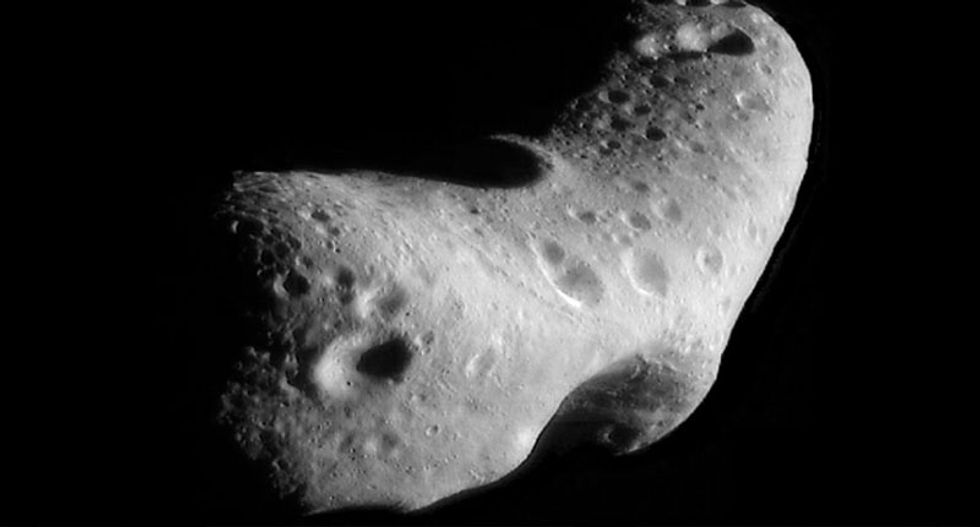 Luxembourg is the first country in Europe to stake out rights for the mining of so-called "near-Earth objects" such as asteroids, according to officials (AFP Photo/)

Luxembourg positioned itself Wednesday to pioneer the potentially lucrative business of mining asteroids in space for precious metals such as gold, platinum and tungsten.

The government announced steps to create a legal framework for exploiting resources beyond Earth's atmosphere, and said it welcomed private investors and other nations.

With a well-established satellite industry, Luxembourg is the first country in Europe to stake out rights for the mining of so-called "near-Earth objects," according to officials.

"Luxembourg also wants to set up a regulatory and legal framework in preparation of the exploitation of space," Jean-Jacques Dordain, former head of the European Space Agency and an advisor to Luxembourg, told AFP.

"Our aim is to open access to a wealth of previously unexplored mineral resources on lifeless rocks hurtling through space, without damaging natural habitats," the nation's economy minister Etienne Schneider said in a statement.

A well-worn theme of science fiction, mineral extraction in space may be on the verge of become a reality.

Two US-based companies, Deep Space Industries and Planetary Resources, have bet heavily on a future market for metals from space.

Both applauded the Luxembourg announcement, and were identified as potential partners.

Looking for precious elements on asteroids tens of million of kilometres (miles) from Earth makes more economic sense than may be apparent at first glance.

As our planet cooled during the early phase of its formation, most heavy substances -- including metals -- sank toward its core, making them inaccessible.

What did remain close to the surface has already been heavily mined, including an increasingly wide range of rare metals used in the electronics and defence industries.

A large number of asteroids -- which vary in size from a couple hundred kilometres across to a few metres -- are clustered in a belt between Mars and Jupiter, and orbit the Sun in the same way as planets.

Indeed, they are thought to be the remnants of a planet that fractured into pieces, perhaps due to a collision.

As a result, the same minerals pulled by gravity towards the centre of Earth are more plentiful and accessible on these free-floating fragments.

NASA has identified some 1,500 asteroids that it has described as easily accessible.

Rapid advances in technology and robotics have brought a space-based, industrial-scale operation into the realm of feasibility, experts say.

Tiny space probes would search for iron ore, rare-earth metals and silicates. Some would be brought back to Earth, while others would become raw material for manufacturing in space using 3D printers.

The probes would also look for water -- normally abundant on asteroids -- to be broken down into oxygen and hydrogen, and used to fuel satellites and rockets.

"Manufacturing habitats, machines and giant structures from space resources will open a new era in exploration and settlement of the solar system," without the additional expense of launching from Earth, the company noted on its website.

In January, the European Space Agency elaborated a vision for a multinational "research village" on the Moon, a project it said could replace the International Space Station.

The village could also be used as a base for mining, and as a stopover for probes heading deeper into space.

The Outer Space Treaty of 1967, signed by major industrial powers, stipulates that natural resources beyond Earth are part of mankind's "common heritage," raising questions as to whether efforts to privatize space mining violate its terms.