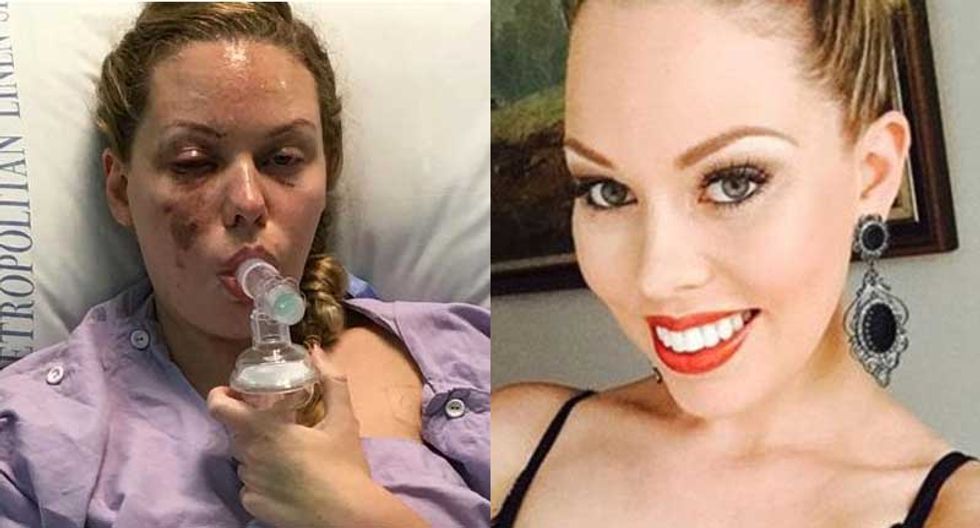 Twenty-eight-year-old former Miss Australia Felicia Djamirze is reportedly recovering from third-degree burns after a flash grenade exploded in her face during a police raid at her Queensland home.

Djamirze was in bed with her boyfriend, alleged Rebel Motorcycle Club associate Dean Grant O’Donnell, when the device that marred her face and left her with a “partially melted hand” went off. Djamirze’s attorney, Chris Ford, told NewsCorp that officers failed to offer proper medical attention in the 40 minutes she waited for an ambulance. He called police behavior “both excessive and negligent.”

Djamirze faces drug charges, and has undergone two surgeries in the hospital. She says she might lose an eye as a result of the controversial tactic.

“This was not a siege situation, or a situation where police were chasing an armed fugitive,” Ford said, “The police rode in like cowboys (and) nearly killed my client. There should be a full independent investigation.”

Two kilograms of methamphetamine and two firearms were reportedly retrieved on property adjoining their home. Djamirze will be charged with one count of trafficking; her boyfriend was charged with 13 other drug and weapons offenses.

The Queensland police offered a statement to Buzzfeed:

“The Queensland Police Service (QPS) conducts detailed risk and threat assessments prior to the execution of any search warrant to determine the most appropriate level of resourcing required to minimize risk to everyone, assist with officer safety and help ensure successful outcomes.”

“As this was an injury in custody incident officers from the Ethical Standards Command attend the address on February 9 and commenced an investigation. The woman and police were interviewed at the time. A formal complaint has not been received by police in relation to this incident.”