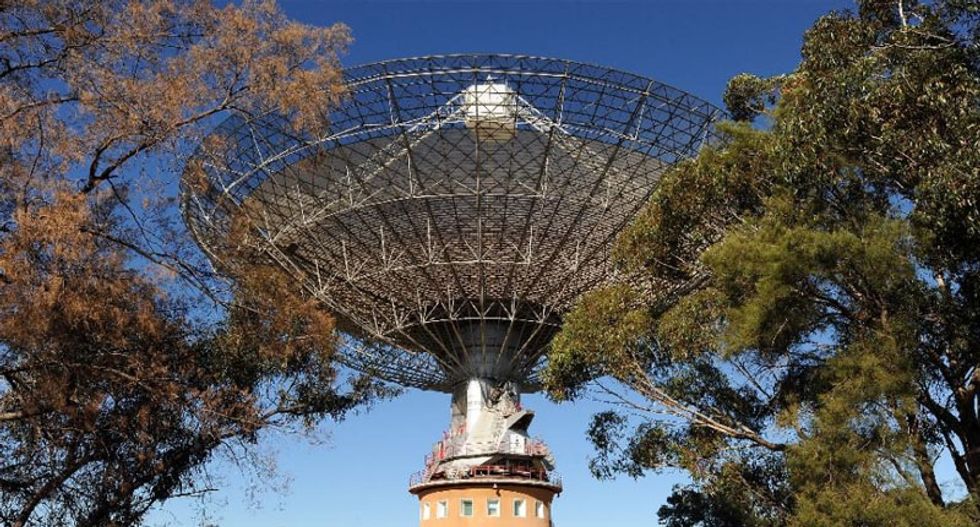 For nine years, astronomers have been trying to pinpoint the origins of mysterious radio flashes which erupt briefly and violently in the faraway Universe.

On Wednesday, a team said they had, for the first time, traced one such flash to a galaxy about six billion light-years from Earth.

Invisible to the human eye, fast radio bursts (FRBs) are radio wave flashes which last a fraction of a second and emit as much energy in a millisecond as the Sun in about 10,000 years.

"Our discovery opens the way to working out what makes these bursts," said Simon Johnston of Australia's national science agency, CSIRO, which took part in the project.

Only 17 FRBs have been detected since the phenomenon was first discovered in 2007, though more than 10,000 are believed to happen every day.

Some have speculated they may be alien signals.

A much likelier source of the FRB observed on April 18, 2015, he said, was the collision of two ultra-dense neutron stars.

The burst was detected by CSIRO's Parke's radio telescope in eastern Australia.

An alert was triggered for other telescopes to follow up, and within hours CSIRO's Compact Array detected an "afterglow" of the flash.

Then to Hawaii, where Japan's Subaru optical telescope looked at where the afterglow -- which lasted for about six days -- came from.

"This involved zooming in by 1,000 times over what we can do with just one telescope," Keane told AFP.

The galaxy identified as the source of the signal is an elliptical one, not spiral like our own Milky Way.

It is about 70,000 light-years wide and has a mass equivalent to about 100 billion Sun-sized stars.

The team said their breakthrough also shed light on another long-standing science question -- that of the "missing matter".

The Universe is thought to be made up of about 70 percent dark energy, 25 percent undetectable dark matter, and only about five percent ordinary matter -- the stuff of which planets, stars and humans are made.

Problem is, astronomers have only ever been able to account for about half the ordinary matter -- the rest is referred to as "missing".

In the latest study, the team could determine the FRB's travel distance and how long it would have taken in a vacuum.

Any delay would indicate that the wave had to have travelled through particles of matter in the space between its source galaxy and ours.

"So we thought that matter was there, but we hadn't been able to see it before. As it delays the FRB signal in a way we can see, we can figure it out."

On the basis of these findings, "we have found the missing matter," contended Keane.

The research was published in the science journal Nature.