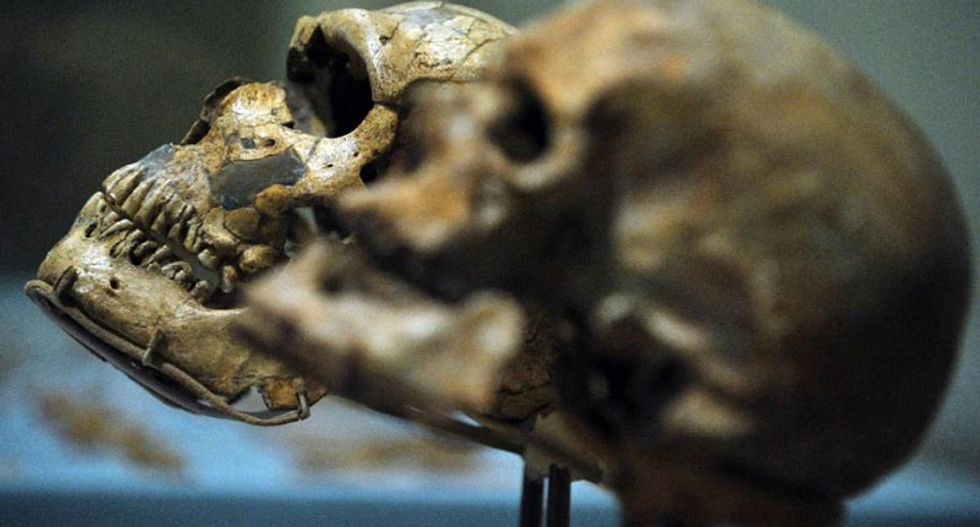 A Homo sapiens skull (R) and a Homo neanderthalensis (L) on display at the Smithsonian Museum of Natural History in Washington, DC (AFP Photo/Mandel Ngan)

A group of modern humans that arrived in Eurasia far earlier than previously thought also had sex with Neanderthals, according to a study that redraws the migratory timeline for our species.

The new research, published in Nature, provides the first genetic evidence that some Homo sapiens left the African continent at least 100,000 years ago, tens of thousands of years earlier than widely assumed.

The smoking-gun proof came not from human fossils but a single Neanderthal whose remains were found in a cave in the Altai Mountains of southern Siberia, near the Russian-Mongolian border.

Embedded in the genome of the ancient caveman -- in chromosome 21, to be precise -- were traces of human DNA.

This is the earliest known case of inter-species sex between Homo sapiens and Neanderthals.

More significantly, it also pushes back the departure of our forebear from the cradle of humanity by some 35,000 years, the researchers said.

"It is the first genetic evidence of modern humans outside Africa," Sergi Castellano, a scientist at the Max Planck Institute for Evolutionary Anthropology and co-leader of the study, told AFP.

The findings are bolstered by the discovery, announced last October, of human teeth in southern China dating back 80,000 to 120,000 years, though there is no reason to think the two groups were linked, the researchers said.

In both cases, they speculate, it is likely that these early migrations from East Africa moved across the Arabian Peninsula.

From there, some may have gone north towards central Asia and Siberia, in one case, and across the Middle East towards east Asia, in the other.

Scientists agree that the first truly modern humans emerged in Africa about 200,000 years ago.

The new study also concluded, however, that the humans who interbred with the Altai Neanderthals are not from the same stock that populated Europe and Asia some 65,000 years ago.

Instead, they likely belonged to a group that separated early on from other humans, "about the time present-day Africa populations diverged from one another, around 200,000 years ago," said Ilan Gronau, a researcher at the Herzliya Interdisciplinary Center in Israel, and co-author of the study.

In any case, they almost certainly died out and are therefore not among the ancestors of present day people outside of Africa, who left the continent much later.

The researchers also examined the DNA of two Neanderthals found in Europe, one in Spain and the other in Croatia.

In addition, they looked at the genetic make-up of another extinct early human called Denisovans, found in the same Altai Mountain cave.

Related to both human and Neanderthal lineages, Denisovans are thought to have split off from the former about 600,000 years ago, and the latter some 400,000 years later. They survived until at least 40,000 years ago.

Neither the European Neanderthals nor the Denisovans carried any modern human DNA.