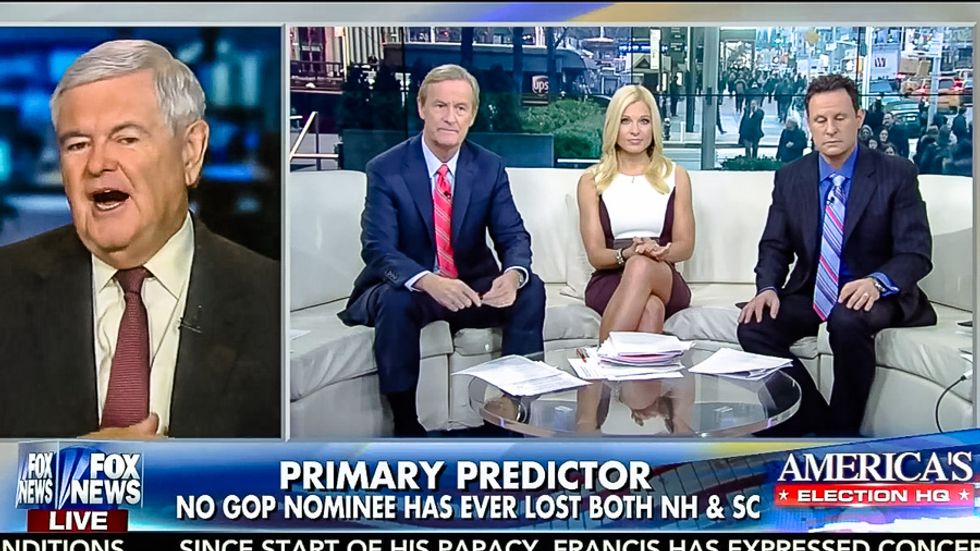 Former Speaker of the House Newt Gingrich reminded the hosts of Fox & Friends that they had essentially "invented" Donald Trump's candidacy by promoting him in friendly weekly interviews for years.

Fox & Friends host Steve Doocy pointed out to Gingrich on Monday that the Republican Party establishment was "uncomfortable with Trump."

"This is their nightmare scenario," Doocy observed.

"The billionaire is spending the least amount of money and running away with this thing," co-host Brian Kilmeade noted.

"That's because of you guys," Gingrich interrupted. "Donald Trump gets up in the morning, tweets to the entire planet at no cost, picks up the phone, calls you, has a great conversation for about eight minutes -- which would have cost him a ton in commercial money. And meanwhile, his opponents are all out there trying to raise the money to run an ad."

Kilmeade argued that some establishment candidates like former GOP nominee Mitt Romney had refused to appear on Fox & Friends.

"Look, you can say that Trump is the candidate Fox & Friends invented," Gingrich shot back. "He was on your show more than any other show."

"It was always a happy, positive conversation," Gingrich continued.