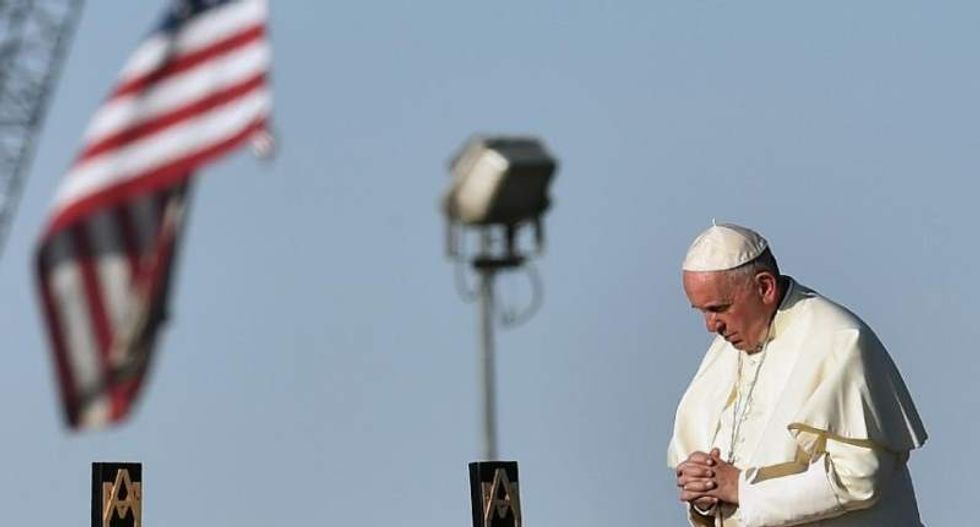 Pope Francis prays next to the US border before celebrating mass at the Ciudad Juarez fairgrounds on Feb. 17, 2016. (Agence France-Presse/Gabriel Bouys)

Pope Francis on Wednesday decried the human tragedy of migrants fleeing violence as he celebrated a huge mass on Mexico's border with the United States, where many have died while crossing it.

In a highly symbolic gesture, the pope climbed a ramp facing the Rio Grande that separates Mexico's Ciudad Juarez and El Paso, Texas, laid flowers under a cross and blessed hundreds of migrants on the American side, who waved at him.

Francis then celebrated mass with more than 300,000 Catholic faithful on the Juarez side of the border, with tens of thousands more following it on a giant screen in an El Paso stadium.

Immigration is a hot-button issue on the US presidential campaign trail and White House hopeful Donald trump criticized the pope's decision to hold such a mass.

But Latin America's first pontiff did not talk directly about the politics across the border, focusing instead on the plight of migrants.

"We cannot deny the humanitarian crisis which in recent years has meant the migration of thousands of people, whether by train or highway or on foot, crossing hundreds of kilometers through mountains, deserts and inhospitable zones," Francis said.

"The human tragedy that is forced migration is a global phenomenon today," he said on the last day of a five-day trip to Mexico.

Central Americans have been leaving their poor and gang-infested countries in droves, crossing Mexico's porous southern border with Guatemala on their way to the United States.

The trek across Mexico is filled with dangers -- from gangs that steal, kill or seek to forcibly recruit them, to corrupt officials who demand bribes to let them travel.

Many others have died under the US-Mexico desert's scorching sun.

"Injustice is radicalized in the young; they are cannon fodder, persecuted and threatened when they try to flee the spiral of violence and the hell of drugs. Then there are the many women unjustly robbed of their lives," Francis said.

"No more death. No more exploitation. There is still time to change, there is still a way out and a chance, time to implore the mercy of God."

The fate of 11 million undocumented immigrants is the source of vivid debate in the United States.

Trump, who wants Mexico to pay to build a wall along the border, has called the pope a "very political person."

"I think that he doesn't understand the problems our country has. I don't think he understands the danger of the open border that we have with Mexico," the billionaire real estate tycoon told the Fox Business channel last week.

In response, Vatican spokesman Federico Lombardi said that, while the pope's job was not politics, "one should not be surprised that his pastoral and spiritual message has political repercussions."

Maria Ortega Cruz Bautista, 62, traveled from Chicago to be with her family at the mass in Ciudad Juarez, a city she left 14 years ago.

She voiced hope that the pope's message will prompt authorities "to have more compassion and more consideration for migrants."

In El Paso, Sandra Ovalle, 32, shared a similar feeling as she headed with her family to the Sun Bowl stadium, where the jubilant crowd performed a wave.

"We hope that the pope will make our leaders change, so that we get support and that things change for the better," said Ovalle, a native of Mexico's northern Chihuahua state who now lives in the US state of New Mexico.

Before the mass, Francis visited a prison, nearly a week after a riot killed 49 inmates at another Mexican penitentiary.

He visited its chapel and addressed hundreds of inmates in the prison yard, telling them they should use their experiences to help "put an end to this cycle of violence and exclusion."

"The one who has suffered the greatest pain, and we could say 'has experienced hell,' can become a prophet in society. Work so that this society which uses people and discards them will not go on claiming victims," he said.

The Juarez prison was the scene of deadly riots a few years ago, with dozens of prisoners killed in recent years, but it has been held up as an example of efforts to improve Mexico's notoriously overcrowded prisons.

Ciudad Juarez stands as a grim symbol of Mexico's violence, but also of hope.

It became the country's most dangerous city a few years ago as the Sinaloa and Juarez drug cartels fought for control of drug routes.

Their turf war left as many as 3,000 dead in 2010, but the murderous rampage gradually eased afterward, with the toll falling to 300 last year.