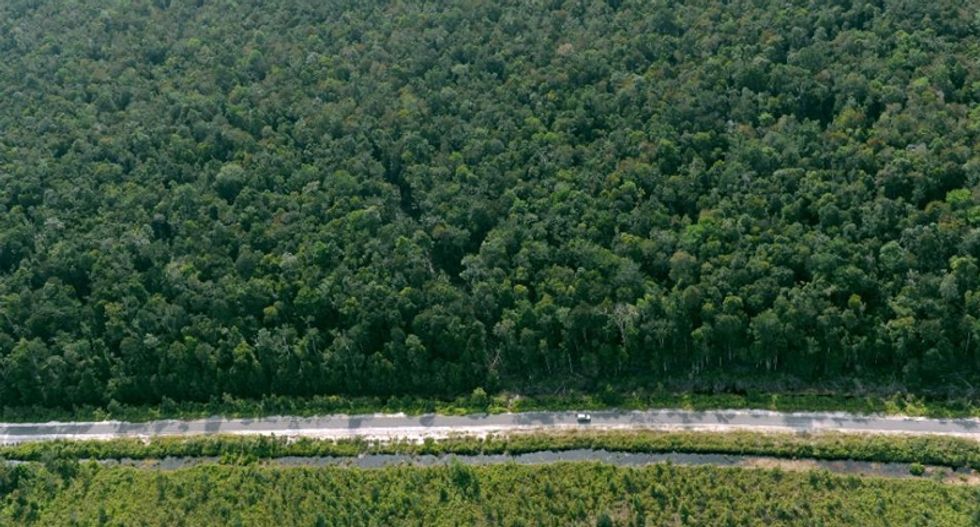 The research, published in the journal Nature, challenges long-standing assumptions that virgin tropical forests untouched by logging or industry do a better job of sopping up carbon dioxide (AFP Photo/Romeo Gacad)

Tropical forests reclaiming land cleared for agriculture or livestock not only grow quickly, but absorb far more CO2 from the atmosphere than old-growth trees, according to a study released.

The research, published in the journal Nature, challenges long-standing assumptions that virgin tropical forests untouched by logging or industry do a better job of sopping up carbon dioxide and, in so doing, slowing the pace of global warming.

It is also good news because it means regenerating tropic forests could play a even greater role in fighting climate change than previously suspected.

"Carbon uptake is surprisingly fast in these young forests that regrow on abandoned pastures or abandoned agricultural fields," said Lourens Poorter, lead author of the study and a professor at Wageningen University in the Netherlands.

After only two decades, recovering tropical forests in Latin America built up, on average, more than 120 tonnes of biomass per hectare (2.5 acres), and were able to remove three tonnes of carbon per hectare per year from the atmosphere.

"That is 11 times the uptake rate of old-growth forests," Poorter said in a statement.

Forests are a major bulkhead against climate change because plants –- mostly in the tropics -– soak up nearly 30 percent of the heat-trapping carbon dioxide humans pour into the air.

Oceans are another so-called "sink" for CO2, with the rest remaining in the atmosphere.

Deforestation is a double threat: Trees release stored-up CO2 when cut down, and reducing the surface area covered by forests means fewer plants are left to absorb it in the first place.

The planet's largest rainforest, the Amazon, has shrunk by nearly a fifth in the last 50 years, while the Indonesian island of Sumatra has lost about 85 percent of its tree cover.

For the study, a large team of scientists led by Poorter analysed the recovery of 1,500 forest plots and 45 sites across Latin America.

Trees grew most quickly in areas with high rainfall and water availability throughout the year. Soil fertility and the amount of forest cover in the surrounding landscape were less important.

"Regional and national policymakers can use this information to identify areas that should be conserved."

Over half of the world's tropical forests are not old-growth, but naturally regenerating after trees had been cleared to make way for crops or cattle.

The three largest tropical forest zones are in the Amazon basin, Indonesia, and central Africa.