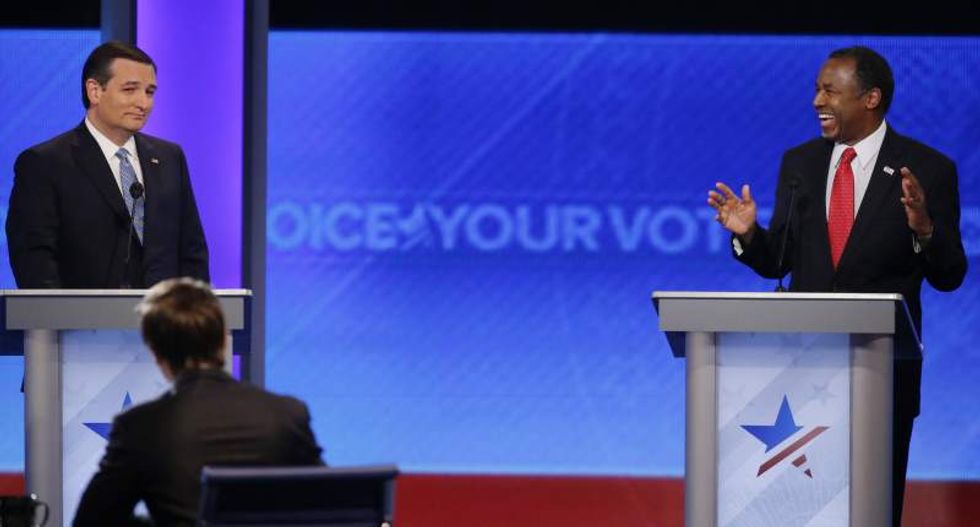 Republican presidential candidate Dr. Ben Carson (R) laughs as he discusses the actions of the campaign staff of U.S. Senator Cruz (L) on the night of the Iowa caucus as they debate during the Republican U.S. presidential candidates debate sponsored by ABC News at Saint Anselm College in Manchester, New Hampshire on Feb. 6, 2016. (Reuters/Carlo Allegri)

"We weren't going to comment to the press on it, but it seems pretty clear that the other party involved had a different agenda," senior Carson spokesperson Jason Osborne said to The Daily Beast in confirming the encounter. "How else could we perceive that to be?"

The meeting was held before Carson spoke at the Conservative Review conference on Thursday night, with the closet reportedly designated as "neutral ground" since the GOP presidential candidates' dressing rooms were next to one another.

Osborne said that the meeting "did not go well" because he did not have time to prepare Carson for the discussion, which went long enough that Carson's staff had to knock on the door to get him ready to speak at the event. The Beast, citing an unidentified party operative, reported that the two met for between 20 and 25 minutes while Carson's Secret Service detail stood outside the closet.

According to Osborne, Carson told him that he and the Tea Party senator agreed to "disagree on accountability and culpability."

A spokesperson for Cruz's campaign, Rick Tyler, also confirmed that the meeting took place, saying, "Yes, they had a good visit."

The meeting came after Carson publicly criticized Cruz's campaign for calling Republican caucusgoers in Iowa and spreading a false rumor that Carson was ending his run for the GOP presidential nomination.