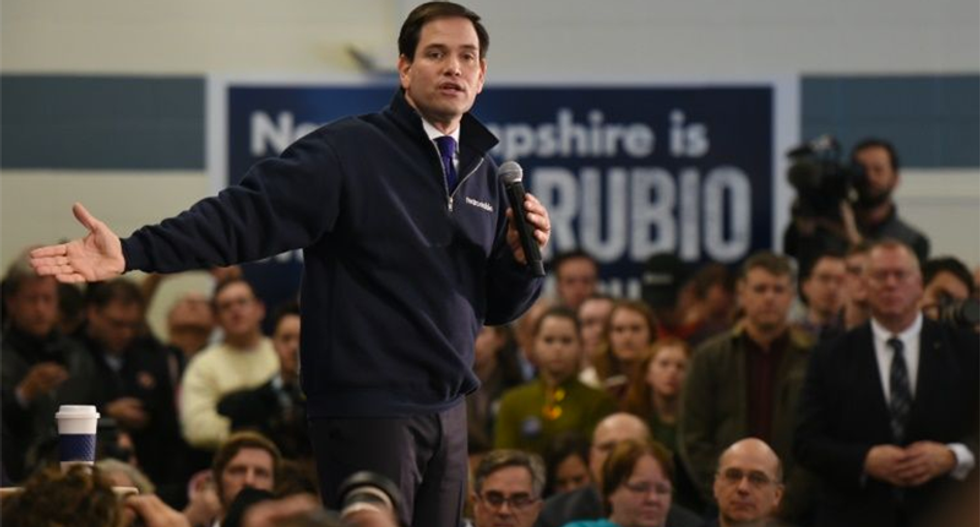 Marco Rubio, the young Republican senator fast building momentum in the race for the White House, came back swinging Sunday after a mauling in the latest presidential debate for his lack of experience.

The charismatic Florida senator floundered at the start of the Saturday night showdown, just days before the crucial New Hampshire primary on Tuesday. He was mocked for repeating the same rehearsed line over and over.

On Sunday he fought back, telling ABC News that his campaign had raised more money last night in the first hour of the debate -- precisely when he appeared to come undone -- than in any other debate.

"Let's dispel with this fiction that Barack Obama doesn't know what he's doing. He knows exactly what he's doing," Rubio said on a loop in clips seized upon by Democrats and doing the rounds on social media.

"As far as that message, I hope they keep running it and I'm going to keep saying because it's true," Rubio told ABC.

Next stop was a town hall event in the town of Londonderry, New Hampshire to address a crowd of hundreds packed into a school hall.

Initially advertised as a pancake breakfast, his campaign took pleasure in announcing it was so oversubscribed they were forced to reclassify it as a town hall, where coffee and muffins would be served.

"We couldn't figure out how to make pancakes for 800 people," quipped a relaxed and confident Rubio, warming up the crowd with jokes about the Super Bowl and making no mention of his debate drubbing.

He spoke eloquently about his parents' struggle as young immigrants from Cuba and the pride they took in being able to own a house and watch their children grow up to have more opportunities than they had.

His personal narrative is a key part of his appeal, reaching out to other immigrant families and tapping into his promise to revive the American dream at a time when the middle classes are more squeezed than ever.

Gathered in the school were young families, visitors from out of state, ardent Rubio supporters, others yet to make up their minds and opponents drawn to the political theater.

"I think he was dead on," said Derek Lafleur, a Ted Cruz supporter, who felt New Jersey Governor Chris Christie had been right to savage Rubio.

Outside two Democrat campaigners made hay by dressing up as robots until Rubio's team asked them to move aside, but few in the crowd seemed that bothered.

The latest 7News/University of Massachusetts Lowell poll also suggested that the glitch had not impacted him in the polls, putting him unchanged at 14 percent behind Donald Trump's 35 percent lead.

Steven Marchand, a consultant from Portsmouth, New Hampshire and a first generation American, said it was a message that resonated strongly with his family despite him being a registered Democrat.

"He's a highly charismatic guy. He's highly articulate. He has a personal story which is compelling to a lot of Americans," he told AFP.

"It's pretty clear that in this election cycle it is not necessarily a big positive in either party, to the extent that might be a weakness of his. It doesn't seem to be holding back a whole lot right now."

Banker William Lionhood, who brought his wife and three young children, said Rubio was the best hope of expanding the voter base for the Republican Party beyond the divisiveness of Trump.

He dismissed Christie as "a little rambunctious" but admitted it hadn't been the 44-year-old Rubio's finest hour.

"Even if Rubio losses three or four points its going to be split over so many different people that are running in the same lane that it probably won't make a huge impact," said Lionhood.

Danny Mahoney, professor of political science at a college in neighboring Massachusetts, agreed.

"I don't think Cruz can win a general election, and I think Trump is a clown and a demagogue, and the governors have no chance of a snowball in hell of being elected president, so that leaves Rubio."

"The last two thirds of the debate he was terrific. There were five brutal minutes where he got flustered by Christie. They were unfortunate but you know you shouldn't score a debate simply by a gaffe."