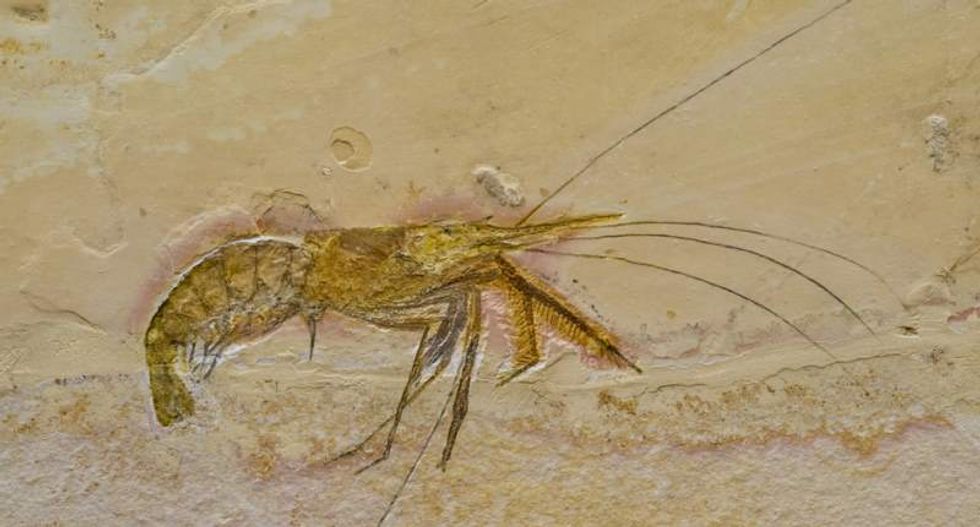 'Fossil of a prawn or shrimp' [Shutterstock]

It might resemble a menacing shrimp, but scientists have discovered an immaculately preserved 520-million-year-old creature was also a bundle of nerves.

Unearthed in southern China, the fossils boast among the oldest and most extensive nervous systems ever preserved, researchers claim. Unlike bones and teeth which are commonly found in fossilised form, soft tissue - and in particular nerve tissue - is another matter. “Nerve tissue is extremely rare, and only very few specimens show traces of brains or nerve cords,” says Dr Javier Ortega-Hernández, of the University of Cambridge, who co-authored the study.

The soft-bodied shrimp-like creature, snappily named Chengjiangocaris kunmingensis, lived around 520 million years ago during the early Cambrian epoch. But while the species - one of a group of animals known as fuxianhuiids - was first reported by Ortega-Hernández and his colleagues three years ago, it is its internal workings that are now captivating the researchers, a team that includes scientists from China, Germany and the UK.

Based on five individual fossils the new study, published in the Proceedings of the National Academy of Sciences, reveals that C. kunmingensis had an intriguing nervous system. And as fuxianhuiids are the distant ancestors of modern arthropods - animals with jointed legs and segmented bodies including lobsters, spiders and millipedes - the study sheds new light on their evolution.

Extending along the length of the underside of the body of C. kunmingensis, the scientists discovered a nerve cord, which at intervals features clusters of nerve tissue - called ganglia - that would each have controlled a pair of its legs. “It looks like a string of dark beads,” reveals Ortega-Hernández. The structure is also found in modern arthropods. However, the fossils also show that C. kunmingensis had a large number of nerve roots branching off from this nerve cord. “Although modern Arthropoda also have nerves, these are fewer in number,” says Ortega-Hernández. “The only group where we find nearly as many nerves is in the velvet worms, which are cousins to the arthropods.”

The fossils, he adds, are extraordinary. “I would say that they have the most intact and pristine extent or preservation of a nervous system seen in any ancient animal fossil,” he says. “The fossils we have been working on gave us some insights into the head but what we weren’t getting was what’s going on all along the segments of the trunk.” Indeed as Edgecombe points out, the new study underscores a changing perception among scientists. “There is a big long, slightly rotten ventral nerve cord which is something that five years ago a lot of people would have said simply would never be known from the fossil record.”