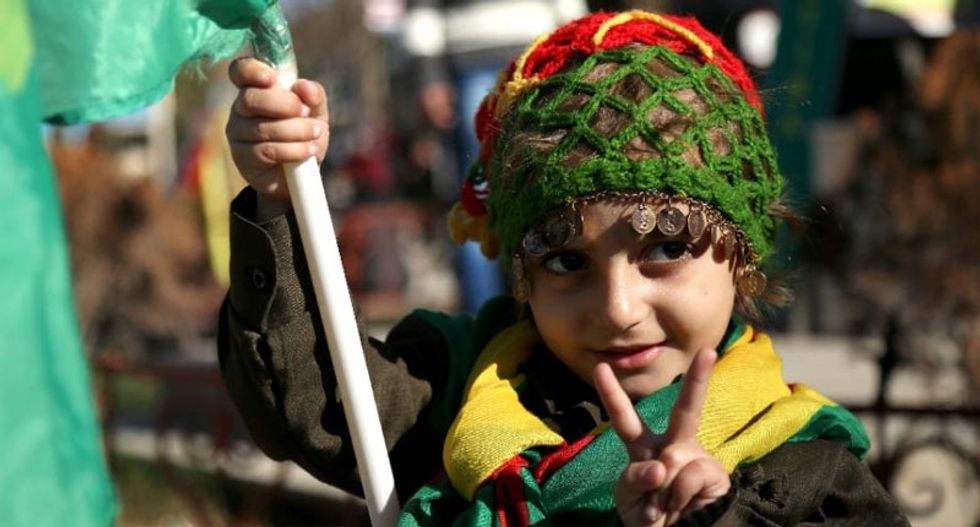 Syria's Kurds, long held in disdain by Damascus, are edging towards autonomy in their heartland along Turkey's border as they capitalise on the tactical goals of both Washington and Moscow.

To the dismay of Ankara, Kurdish forces have seized on the collapse of rebels in the northern province of Aleppo in the face of Russian-backed regime gains to advance to within 20 kilometres (12 miles) of the border.

From the outset of the Syrian conflict in 2011, the Kurds benefited from the regime's pullback from their regions to establish a local administration spanning from northwest to northeast Syria.

According to Syria analyst Fabrice Balanche, the Kurds who have gained ground mostly from Islamic State jihadists who now control 14 percent of Syrian territory, or 26,000 square kilometres (10,000 square miles), compared with nine percent in 2012.

Their long-cherished ambition is to set up an autonomous region like their Kurdish brethren across the border in Iraq by connecting the three Kurdish "cantons" of Afrin and Kobane in Aleppo province with Jazira in Hasakeh province.

"The Kurds' main aim is to annex the cantons... They want a decentralised Syria, perhaps their canton system can be a model for the rest of Syria," said Mutlu Civiroglu, a Washington-based analyst on Syria and the Kurds.

Balanche said they want to link up Kobane and Afrin to ensure that their "'Rojava' (Syrian Kurdistan) has territorial continuity".

In the battle for Aleppo which has raged since the start of February, the Kurds have broken a more than year-long siege of Afrin by Islamist rebels and Al-Nusra Front jihadists with the key support of Russian air strikes.

To join Afrin and Kobane, their next battle will be fought against the Islamic State group, mainly in eastern Aleppo.

On the battlefield, the Kurds have linked up neither with the regime nor rebel forces fighting to oust President Bashar al-Assad.

"From the very beginning, the Kurds have followed what they call 'the third path'. They are neither with the regime nor with the opposition because neither of them acknowledge Kurdish rights," said Civiroglu.

As a result, "neither the regime nor the rebels are happy with them".

Rebel forces have also accused the People's Protection Units (YPG), the Kurdish fighting force, of merely serving regime interests by expelling them from strategic areas of Aleppo such as the town of Tal Rifaat and Minnigh air base.

"We have nothing to do with the regime's battle," insisted Salah Jamil, an official of the Democratic Union Party (PYD), of which the YPG is considered the armed wing.

"We've fought against Al-Nusra and other factions which carry out Turkey's strategy because they have besieged our regions and bombarded our villages," he told AFP.

Maria Fantappie, an International Crisis Group expert on the Kurds of Syria and Iraq, said: "The PYD's priority is now one of capitalising on their territorial gains and intricate set of regional and international alliances to establish themselves as an uncontested political player in a future Syria."

The PYD may not have been invited to the Geneva peace talks between the opposition and the regime, but in January it hosted Washington's pointman in the battle against IS, Brett McGurk, and opened a representation in Moscow this month.

Turkey, alarmed by the Kurdish gains, has since Saturday bombarded Kurdish positions across the border in Syria.

The United States, which counts on its Turkish ally in the multinational fight against IS, has also relied on the Kurds in both Syria and Iraq to battle the jihadists on the ground.

For its part, Russia has since September pummelled jihadist and rebel positions with air strikes which have allowed the Kurds to expand their territory, notably with the seizure of Minnigh air base.

"Moscow cannot ignore the Kurds. They are the main power who are fighting the jihadists. It is in Russia's interest too" as well as that of Washington, said Civiroglu.

While supporting the Assad regime, which Ankara has fiercely opposed for the past five years, Moscow stands to gain on the Kurdish question, a source of friction between Washington and Ankara.

Balanche said Assad may not be enchanted by Moscow's support for the Kurds, but he has no choice as his very "future depends on the backing of Russia".

Russian President Vladimir Putin has clearly made his support for Assad conditional on the creation of a Kurdish autonomous entity in northern Syria, according to Balanche, who is currently working with the Washington Institute for Near East Policy think tank.

"So in effect the Kurds will serve as Syria's border guards."