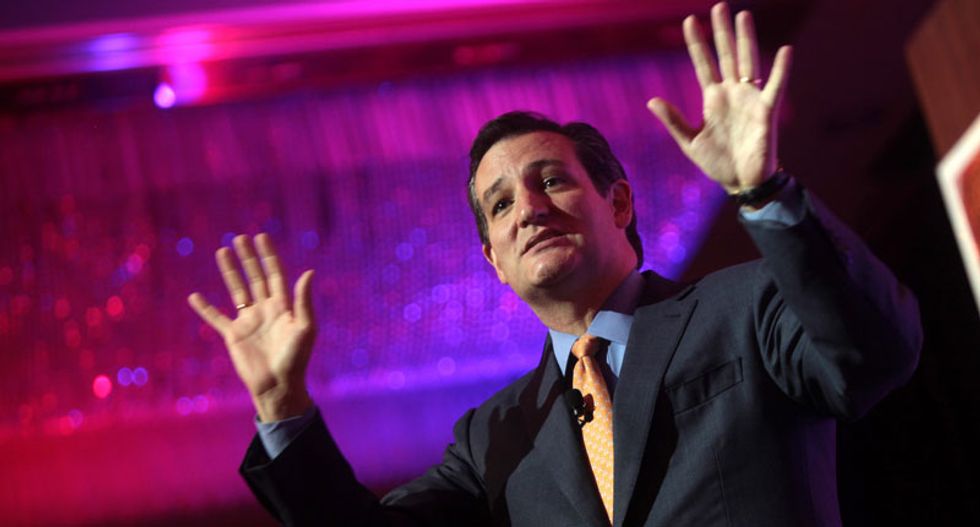 Ted Cruz usually exudes the self-righteous certitude of a man who knows he is heading towards both victory and heaven. He isn’t just running a campaign for president, but a faith-propelled Cruzade to restore Judeo-Christian values and Reaganomics to Washington.

But at a “victory” party in a mostly empty YMCA hall in Las Vegas – a city that was built on sin – you could sense the doubt and despair creeping in. After Donald Trump’s third resounding victory, the Cruzade against the New York infidel has less than a week to prove itself before Super Tuesday.

“I kind of halfway expected this,” said Steve Perry, a downbeat Cruz supporter from Las Vegas. “I’m not giving up. As people drop out, there’s still hope for Ted Cruz. If Carson drops out, and Kasich drops out, hopefully there will be a new game.”

This is the game of alternate reality that is currently playing out among all the non-Trump campaigns in the aftermath of the four early voting states. If everyone else drops out, maybe we can win. How or when their rivals might drop out is never explained.

Based on the current polling numbers, by the time the field narrows further, Trump will have amassed an insurmountable lead in delegates heading to the Republican convention.

Insurgent campaigns sorely need a series of victories to build name recognition, financial support and credibility. At this point, time and momentum are not on the side of the anti-Trump forces. Instead, they seem determined to waste their time trying to destroy one another.

While that victory in Iowa represents Trump’s only defeat, there are no grounds for thinking that Cruz is building momentum with his third place finish in Nevada. In fact, there is plenty of evidence to show that Trump is peeling off evangelical voters – the core of Cruz’s support – after the past two contests.

Instead, Cruz and his high-profile supporters are pinning their hopes on a single state: Texas. Cruz’s home state represents the largest state up for grabs on Super Tuesday, but the other states combined – where Trump is riding high – outweigh even the Lone Star state. Even back home in Texas, Cruz is holding a slender single-digit lead in the polls that is within the margin of error.

“This is a two-man race. It’s between Ted Cruz and Donald Trump,” said Dan Patrick, Lieutenant Governor of Texas, as he tried to rally Cruz volunteers and supporters in Las Vegas on Tuesday. “The only two candidates who will win a state next Tuesday are those two men. And on Wednesday you could have a brand new leader on top of the delegate board.”

While this scenario is mathematically possible, it conveniently ignores both the polls, the number of delegates in play on Tuesday, and the inconvenient truth that the other campaigns show no signs of giving up.

To take down the frontrunner, Cruz – and his rivals in the anti-Trump cluster – must now attack Trump’s character and pitch for the presidency. This is no easy task, not least because Trump has proved immune to attacks to date.

It’s also not easy because the anti-Trump forces are attacking from a position of weakness. Take Cruz’s highest profile surrogate: the rabble-rousing talkshow host and conspiracy theorist Glenn Beck.

Styling himself as a political historian, Beck tries to take down Trump by citing Alexis de Tocqueville: “America is great because America is good.”

“We have politicians right now, two of them come to mind, that are playing to the lowest common denominator. They are playing into our anger. If someone is playing into your rage, into your anger, that’s not elevating things. That’s tearing us down,” Beck said on Tuesday night. “You cannot make America great if you are not helping make America good.”

Beck went on to complain about the way Trump treated other candidates at the last TV debate. “I have never seen anything like it,” he said. “That’s not the way we treat each other. We have basic disagreements. We can get along with everyone. We should get along with everyone if we have principles in common. And those principles are the Constitution of the United States of America.”

This is more than a little ironic coming from Beck, who built his fame and fortune on the Tea Party rage of the early Obama years. Anger seemed to be perfectly acceptable if it helped the GOP sweep back into power in Congress in 2010 and block the most basic functions of government.

Beck neatly embodies the Republican establishment’s central problem as it tries to deal with its spectacular implosion in this election. Having enjoyed the rage of the Tea Party for so many years, it cannot now lament about how the party has changed fundamentally.

Instead of allowing the fringe to splinter into a third party, like earlier insurgencies, the GOP leadership co-opted its anger out of a sense of expediency. Now the establishment candidates sound like pale copies of the angriest candidate in the field. It is too late to pretend that such politics are unhelpful or out of bounds.

The result is that the Republican party will be hard to unite after a Trump nomination. There is a sense of disgust with Trump among Cruz’s supporters, who believe – like their candidate – that the real estate developer is a dangerous fake.

“I have heard people saying if Trump is elected, they will move to Canada,” said Helen LeBrett, a Cruz campaign volunteer who traveled from California to support the Nevada effort. “And I have said that too. It would be really hard to vote for Trump.

“I have watched him and how he has treated [Fox News host] Megyn Kelly . He wanted to eviscerate her. If there’s anybody who is his enemy, who isn’t for him, his way of doing things is slash and burn. It’s like war for him. Megyn Kelly is a brilliant woman. He doesn’t know what he’s talking about. He’s crazy. I mean, crazy. He would be just a pretend Republican, just as bad as Obama.”

Of course, Canada need not worry about an influx of Cruz immigrants. Many are likely to revert to a reluctant support for their party’s nominee when faced with the alternative: voting for Hillary Clinton or Bernie Sanders.

For his part, Trump clearly doesn’t care. In fact, he’s proud of his fight with Kelly. So proud that his rallies begin with a video that showcases his many spats with the anchors and analysts on Fox News.

Slash and burn politics may trouble his rivals, but it’s working very nicely for Donald Trump.