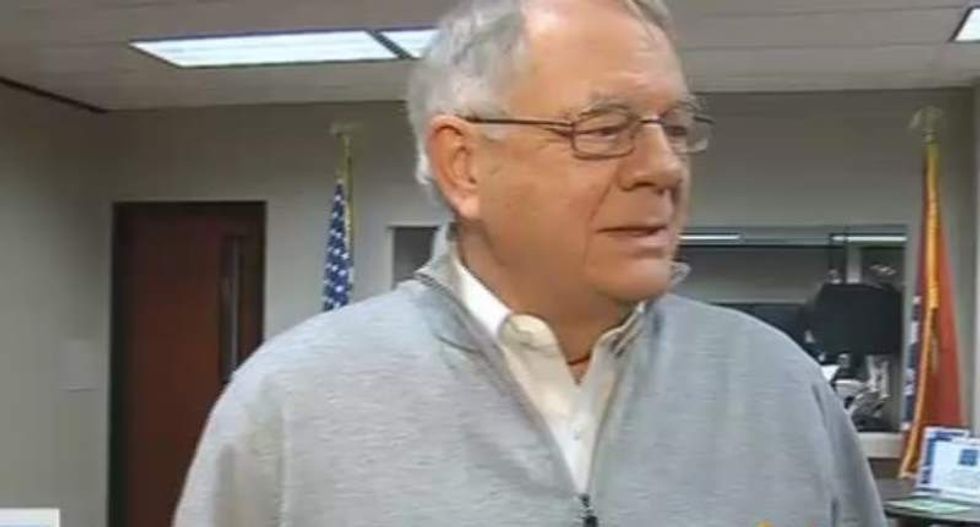 The Republican election commission chair for Davidson County, Tennessee resigned from his position after cursing at a reporter on camera as she pressed him to explain exorbitant expenditures, the Tennessean reported.

Autler is seen on camera asking Buchanan to explain a $123 charge at a Nashville-area restaurant last June.

"That charge was for a business meeting to discuss the budget on June 30 when the budget was approved July 1 and it was a very legitimate purchase," he responds.

"Couldn't you have gone to another restaurant that was perhaps not as expensive?" she asks, prompting him to say, "That's it" and start walking away.

Autler then follows up, asking, "Can you explain the picture frame that was $614?" referring to a large frame election administrator Kent Wall bought for the commission's office using a county-issued credit card.

"That's it," he repeats, adding, "That's exactly the b*tch I thought you would be."

Buchanan then walks away from Autler and out of the room where the interview was being held.

The confrontation came after WSMV investigated several expenses incurred by both Wall, the local election administrator. Wall originally agreed to let the station see his expense records at the end of March, then announced he would be retiring from office at that same time.

The purchases, which included another frame costing $140, as well as nearly $150 for lamps and bookends for the commission's offices, came around the same time the group voted to shut down 10 early election sites, citing a budget shortfall. County officials later agreed to give the commission an additional $283,500 in funding.

Buchanan originally apologized for his outburst against Autler, but later told the Tennessean that it was "the one word" that could convey his feelings at that moment.

"I should not have used that terminology, but as the media has the freedom of press, individuals have the freedom of speech," Buchanan said. "And I can tell her what I think about her. And I did that, and I don't apologize for it. There are people that don’t think I should have done it and that it hurts politics in this area, and so be it."

Nashville Mayor Megan Barry (D) said in a statement that Buchanan's remark was "outrageously inappropriate," and has ordered that the commission's credit card be revoked while an audit is performed on its recent purchases.

"It is good that Mr. Buchanan has resigned, but unfortunate that he has shown no remorse for his words or actions," the mayor said. "Government officials should be able to withstand tough questions."

Watch WSMV's report, as aired on Monday, below.