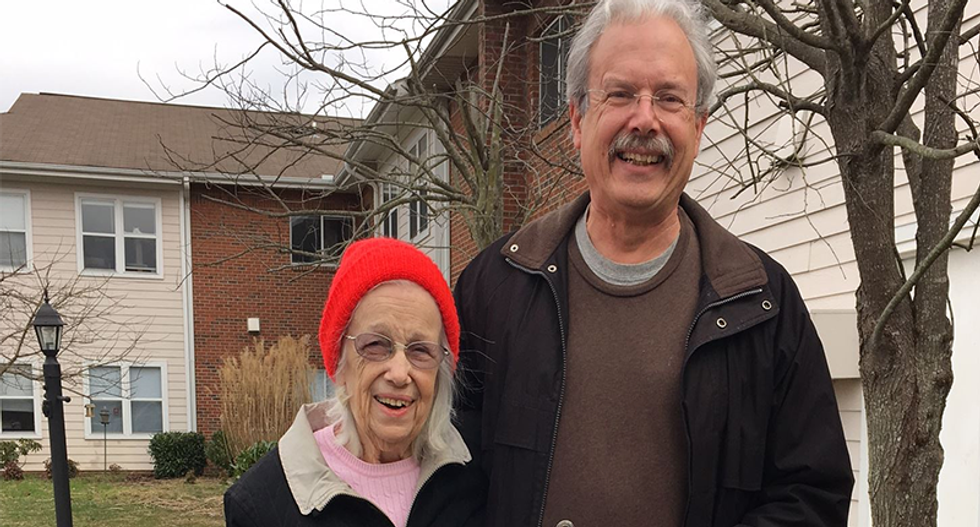 Reba Bowser and her son, Ed photographed after attempting to register to vote (Facebook)

Reba Bowser is an 86-year-old Republican, but thanks to the North Carolina's voter I.D. laws, she may not be able to vote in November's election.

Not long ago she moved from her home in New Hampshire to be closer to family in North Carolina. Her son Ed wanted to make sure she had all of the necessary forms in order to be able to vote in the elections this year. So, they made a day of it: filling out the voter registration form, having a nice lunch even taking a fun photo of the profound statement about democracy. Monday, they continued the trek with a trip to the Department of Motor Vehicles with all of her paperwork which included a birth record from Pennsylvania, Bowser's Social Security card, and a New Hampshire driver’s license which she let expire because at her age she had no interest in driving anymore.

This is where the problem begins. Like many women who get married, Bowser changed her name to take her husband's surname after their ceremony in 1950. To keep her maiden name, however, she swapped it out with her middle name. That's why the name Reba Miller Bowser didn't match her birth record and as a result, her application for an I.D. card was rejected.

“It wasn’t obvious to my mom what was happening,” her son Ed told the Charlotte Observer.

Never before has she had to deal with this name confusion. She was able to obtain a driver’s licenses in Pennsylvania and New Hampshire and fly on planes without any trouble. The TSA might not consider her a terrorist, but North Carolina thinks she might be a voter terrorist.

Her daughter-in-law Amy Knisley took to Facebook with her frustrations in a post that has now gone viral with over 23,000 shares saying,

"DENIED on the grounds that she did not have a MARRIAGE LICENSE showing proof of her change of middle name. She didn't have "PROOF" that she changed her MIDDLE NAME when she got MARRIED.

NC brothers and sisters: GET BUSY GETTING READY TO VOTE. Do NOT put it off. BECAUSE: our state may not make it easy for you to exercise one of your most fundamental civil rights. If you're not sure about your registration status, get sure. If you don't have a current photo id, get one. If you know somebody who may not be ready, like your sweet old mother in law, or a neighbor: ask them. Help them."

When North Carolina was working to pass its voter I.D. law in 2013 this is exactly what experts predicted would happen. "More than 300,000 registered voters in North Carolina could lack either a driver's license or a state ID," NPR reported after the bill was signed.

The law was immediately challenged as unconstitutional in court for the undue burden that it places on the elderly, people of color and the poor. But U.S. District Court Judge Thomas Schroeder, who was appointed by George W. Bush, upheld the mandate of the voter I.D.

The AARP says that voter I.D. laws disproportionately harm the elderly because many were born at a time when paperwork wasn't as much of a concern as surviving the birth itself. Donna Jean Suggs was born at home thanks to the help of a midwife in 1949. The South Carolinian managed to get a Social Security card but could never get a birth certificate which means she was never able to drive or vote.

“Both my parents, they voted in every election,” Reba Bowser's son Ed recalled. “My grandparents did, too. They took this seriously.” In fact, Mrs. Bowser said that she has voted in every election since Eisenhower. Sadly, however, this might be the end of the reign. “I’m thinking how this affected an 86-year-old woman with limited transportation and resources," her son continued. "You think about extending that to poor communities and minority communities.”

That's exactly the result North Carolina's Republican legislators were hoping for when they passed the law. Along with the state Texas, Kansas, North Dakota, Wisconsin, Mississippi, Tennessee, Alabama and New Hampshire all now have strict voter I.D. laws according to Ballotopia.

Sadly, this is just one of the many faces of those who cannot vote thanks to the GOP's war on so-called "voter fraud."

What's on my mind: today, my mother-in-law showed up at the NC DMV to get a photo ID card. She had a Social Security...