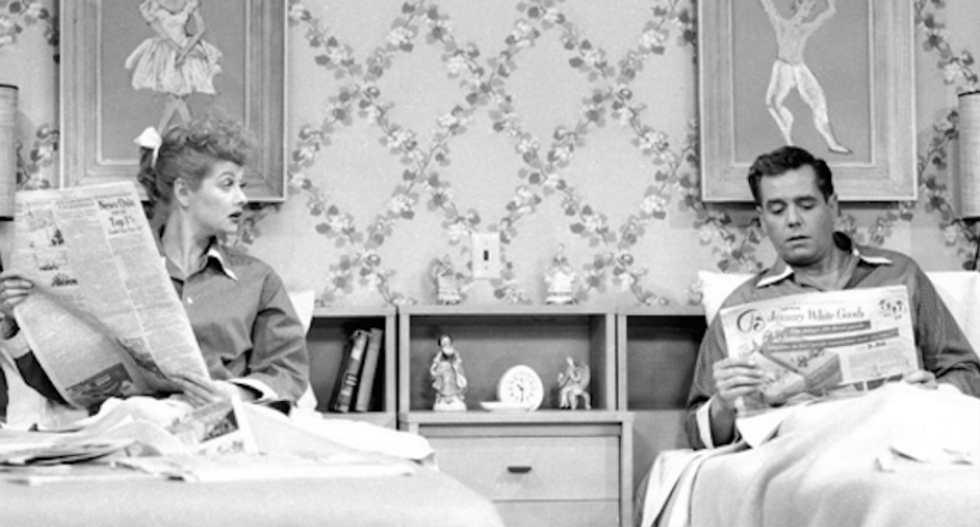 In the mid ’30s, scandal-plagued Hollywood studios appeased moral crusaders by implementing a censorship guide. Commonly known as the Hays code, the regulations affected not only sex and violence, but also forced on-screen couples to kiss with their feet on the floor and sleep in separate beds.

The Hays Code split Nick and Nora Charles’ marriage in two. In their 1934 movie debut “The Thin Man,” the booze-loving sleuths nursed hangovers from the shared comfort of a king bed. When they returned in 1936’s “After the Thin Man,” Hollywood censors forced them into separate twin beds.

In the mid ’30s, scandal-plagued Hollywood studios appeased moral crusaders by implementing a censorship guide. Commonly known as the Hays code, the regulations affected not only sex and violence, but how men and women could interact on screen and, as with poor Nick and Nora, how they furnished their bedrooms.

The code was named for Will Hays, president of the Motion Picture Producers and Distributors of America, a trade organization formed in the 1920s to rehabilitate Hollywood’s outlaw image that later changed its name to the Motion Picture Association of America, or MPAA. At the time, daily newspapers blasted headlines about movie star scandals like Fatty Arbuckle’s rape and manslaughter trial and director William Desmond Taylor's murder. A former chairman of the Republican National Committee and Postmaster General, Hays was paid handsomely to use his Wall Street and Washington D.C. connections to legitimize movie making.

“Hollywood was not part of the business establishment,” UCLA School of Theater, Film and Television film history professor Jonathan Kuntz said. “It was founded by immigrants, a lot of them Jews, who created the whole business of movie making and distribution on their own.”

In the 1920s, state-level censorship boards decided whether movies could be shown in local theaters. Navigating the different boards was complicated; what was acceptable in New York might be met with tightly clutched pearls in the Midwest. If a movie was rejected, studios lost money. To clear the boards, they created a guideline with a distinctively early 20th century name, the "Don'ts and Be Carefuls.” Since nothing compelled them to follow it, filmmakers ignored it.

In 1930, two Catholics, Martin Quigley, publisher of movie trade publication Exhibitors Herald, and Jesuit priest Daniel A. Lord, wrote a longer and more forcefully worded code for motion picture content. Desperate for a shortcut through the state censorship boards, studios adopted it. Reflecting its Jesuit origins, the code warned that movies must avoid "lowering the moral standards of those who see it."

“The key thing to remember about the code is this sense of the moral universe,” Brandeis University American studies professor Thomas Doherty said. “The easy things we can focus on are the sex, violence and bad language. The big thing about the influence of the code is it promulgated this Catholic vision of the world where the guilty are punished, the virtuous are rewarded and the authority of church and state is upheld and overseen by a just and merciful God.”

The production code, like the “Don'ts and Be Carefuls,” lacked enforcement. With violent mob movies starring Edward G. Robinson and James Cagney and sexually charged Mae West vehicles too popular to be censored while the Great Depression slouched onwards, the rules were initially ignored.

Convinced censorship was inevitable, Hays didn’t want the government or other outside organization dictating acceptable movie content. To retain control of their product and placate their critics, he created the Production Code Administration, a new MPPDA tasked with enforcing the production code to the letter.

To bring Hollywood to heel, Hays tapped Joseph Breen, a former journalist and public relations agent well regarded by studio moguls and Catholic groups. Breen, who would run the office for more than 20 years, was the perfect counterweight to the decadent cineastes of Tinsel town.

“He was your basic hard nosed Irish Victorian Catholic,” Doherty, author of the 2007 book Hollywood's Censor: Joseph I. Breen and the Production Code Administration, said. “What I think gave him so much power is he had this really strong, charismatic personality and he was a ruthlessly efficient bureaucrat, so he made the trains run on time.”

Breen sincerely believed censorship was God’s work. He took control of the Production Code Administration office in the middle of 1934 and quickly busied himself scrutinizing scripts, dailies, publicity photos and costumes. In the two decades he held the job, he was repeatedly hospitalized from job-related exhaustion. His efforts were quickly evident.

As it de-sexualized cinema, production code films dedicated themselves to marriage, an institution they were required to portray as sacrosanct. Adulterers were punished and sex outside of marriage was forbidden. Married couples weren’t cleared for lusty displays, either. To appease British censors, couples slept in separate beds. The bedroom wasn’t the only living space disrupted by the code. Movie bathrooms lost their toilets to avoid the threat of potty humor.

The code policed displays of affection carefully. Kisses couldn’t last longer than three seconds and couples had to always keep at least two feet on the floor.

“Usually it was the man who could not leave their feet,” Kuntz said. “The woman could lay down. She could lie on a couch or a bed. The man could even lean over and kiss her but he could never leave his feet. You could never have the man and the woman simultaneously horizontal.”

Because they are broadcast mediums, the Federal Communications Commission regulates television and radio. Therefore, television didn’t have to follow the Hays Code but fell into many of the conventions nonetheless, with Lucy and Ricky sleeping in separate beds and the eight members of the Brady family famously living without a toilet.

The Hays code was abandoned roughly 30 years after its implementation, a victim of 1960s American social upheavals. While studio films like "Who’s Afraid of Virginia Woolf" pushed the boundaries of acceptable language, films without Production Code approval like Blow Up became hits, eroding the code’s authority.

In 1968, the MPAA replaced the code with the familiar movie ratings system of G, PG and X, which has remained intact except for the addition of the PG-13 rating in the 1980s and the 1990 introduction of the NC-17 rating to replace the X-rating, which was sullied after the non-copyrighted X-rating was enthusiastically embraced by pornographers.

Breen received an honorary Oscar when he retired in 1954 for his “conscientious, open-minded and dignified management.” He declined to give a speech. Perhaps after all his years regulating onscreen behavior, he was afraid someone would censor him.

This story by Adam Bulger originally appeared in Van Winkle's.