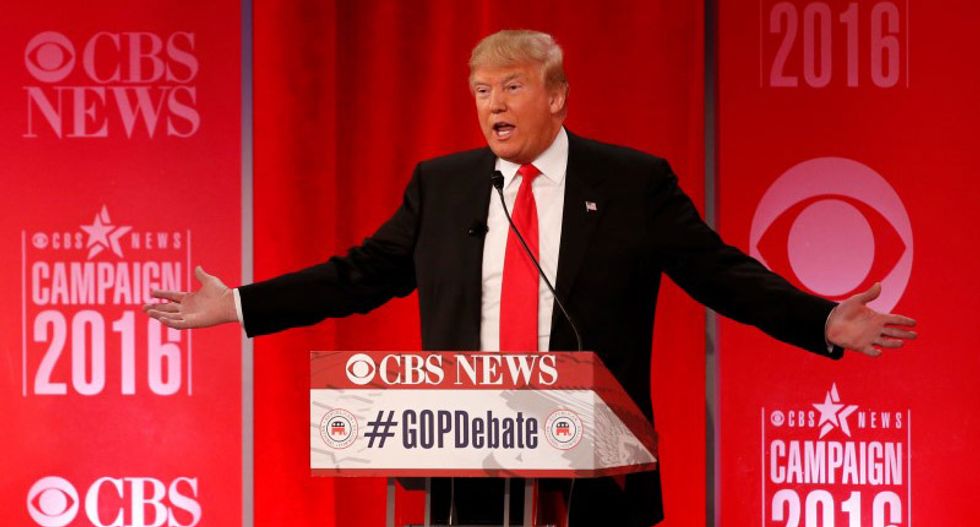 Republican frontrunner Donald Trump made a veiled threat on Monday to launch a third-party run as an independent candidate, saying Republican leaders are “in default” of an agreement to treat him fairly.

Speaking at a campaign event just outside of Charleston, South Carolina, the billionaire hinted that he may still run an independent campaign for president, despite a pledge he signed last year to stay within the party.

Trump, who was booed at a debate on Saturday, complained that the audience was full of “lobbyists and donors” whom he accused of manipulating his rivals. “Those tickets were all special interest people. I know ’em,” he said.

“I signed a pledge but it’s a double-edge pledge, and as far as I’m concerned they’re in default of the pledge.”

A spokesperson for the Republican National Committee told the Guardian: “The language of the pledge is pretty straightforward.”

The pledge, he said, “simply states the candidates pledge to run as a Republican and support the nominee. Nothing more and nothing less.”

The men and women in the audience were largely at the candidates’ discretion, according to the RNC: “Each candidate received 100 tickets which is the largest amount so far. The candidates as a whole were the largest group of ticket holders.”

But Trump declared said “the pledge isn’t being honored by them”, without elaborating on what the Republican party’s obligations would be under the agreement. He said the debate was “a disgrace” and “the RNC does a terrible job”.

In the past two debates, audiences booed Trump repeatedly after tangling with a rival, Jeb Bush , on issues like the Iraq war and eminent domain. The Trump campaign has insisted that the audiences were packed with “donors and special interests”, a claim that has been repeatedly and vehemently denied by party leadership in the RNC.

Trump did elaborate on how he noticed familiar faces out in the crowd, and mimicked how one acquaintance waved and sniggered. “He’s going ‘boo, boo!’ And he’s waving at me,” Trump said. “They’re booing me because they’re having fun!”

“I’m saying this is crazy! But I know many of these people,” he continued. “That was a wealthy room.”

The billionaire has made his independence from lobbyists and donors a central pillar of his campaign, though his claim of a completely self-funded campaign is freighted with half-truths and caveats . Trump has nevertheless accused his rivals, all active politicians for years and sometimes decades, of being at the whims of special interests such as Wall Street and the oil companies.

Trump’s threat to run as a third-party candidate is unusual since it comes five days before the South Carolina primary – a state where the Republican frontrunner has a commanding lead in the polls and is expected to win easily.