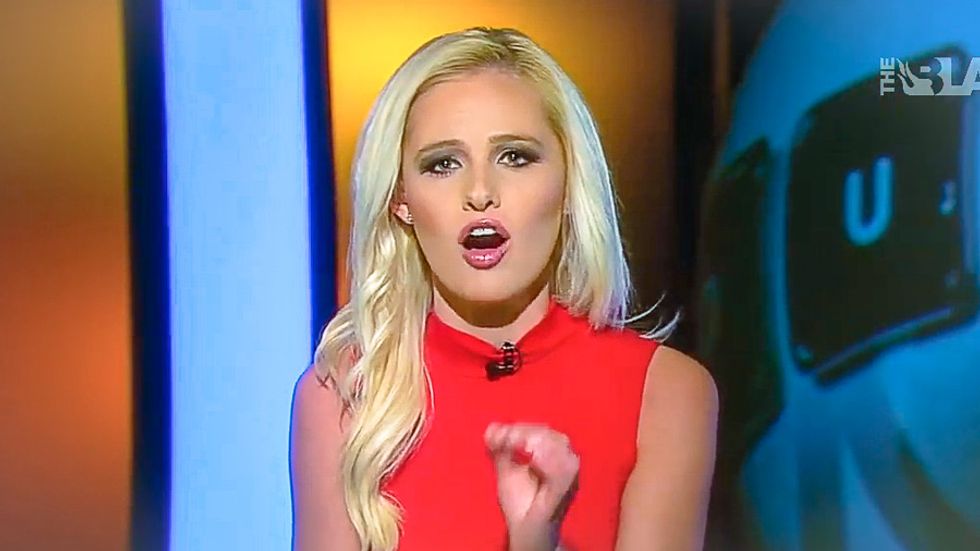 Tomi Lahren, host of Glenn Beck's The Blaze network, argued this week that Beyonce's tribute to Black Lives Matter and the Black Panthers at the Super Bowl was unfair to "little white girls" who like her music.

"First it was hands up, don't shoot," Lahren complained during her Tuesday show. "Then it was burning down buildings and looting drug stores, all the way to #OscarSoWhite. And now, even the Super Bowl halftime show has become a way to politicize and advance the notion that black lives matter more."

According to the host, Beyonce was "ramrodding an aggressive agenda down our throats, and using fame and entertainment value to do so."

"Congratulations, Beyonce, you made your statement," she continued. "The Super Bowl, the most watched event on television. A game that brings Americans of every color, background and political party together. A game where black fans cheer next to white fans."

"Good for you, you made headlines. You're just like President Obama, Jada Pinkett Smith, Al Sharpton and so many others just can't let America heal, keep ripping off the historical Band-Aid. Why be a cultural leader when you can play the victim, right?"

Lahren added: "White people like your music too, white people buy your songs on iTunes, memorize your lyrics and admire your talent and beauty."

According to the host, "little white girls want to be like you just as much as little black girls do."

"But instead of recognizing that, you rather perpetuate the great battle of the races," Lahren ranted. "Your husband was a drug dealer. For fourteen years, he sold crack cocaine."

"Talk about protecting black neighborhoods? Start at home," she concluded.

"What Tomi gets, but will not admit because she’s a paid GOP troll, is that the #BLM message has always been 'Black lives matter'. Not more. Just matter," he wrote. "Beyonce and so many others like her are not using their voices to abolish slavery, or lobby congress to establish a 15th Amendment, so the 'historical bandaid' line is nutter (not to be confused with utter) nonsense."

"Lahren’s real issue with Beyonce’s militant dance off with Bruno Mars becomes apparent: that being what gives this Black entertainer the right to publicly denounce the unjustified murders of Black civilians instead of entertaining me."

Watch the video below from The Blaze.