WATCH: Clinton and Sanders clash after she accuses him of 'very artful smear' 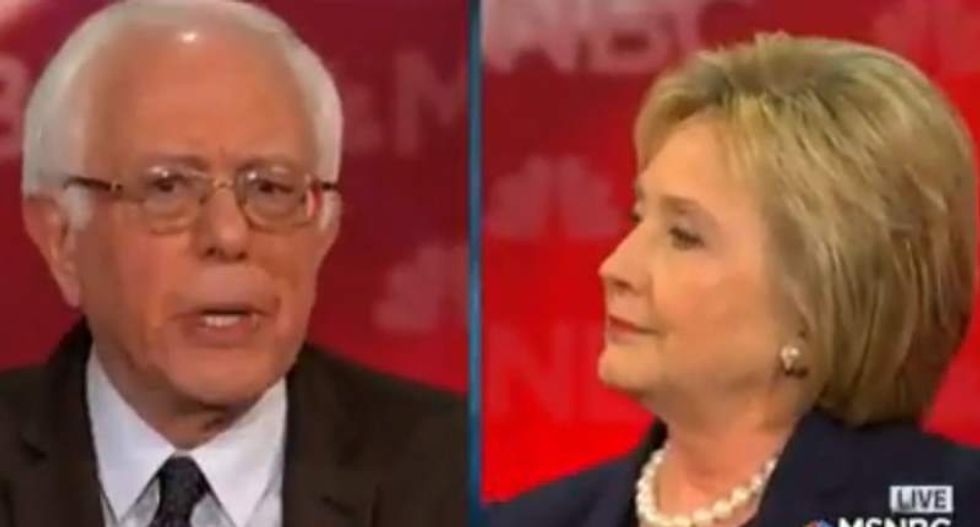 Former Secretary of State Hillary Clinton called out Sen. Bernie Sanders (I-VT) during Thursday's Democratic Party debate over his accusation that she is part of the political establishment.

"You know, Senator Sanders has said he wants to run a positive campaign. I've tried to keep my disagreements over issues, as it should be," she said. "But time and time again, by innuendo, by insinuation, there is this attack that he is putting forth, which really comes down to -- you know, anybody who ever took donations or speaking fees from any interest group has to be bought."

Sanders had criticized Clinton for having a super PAC that raised $15 million thanks to Wall Street donations.

She went on to respond that those "attacks by insinuation" were unworthy of Sanders, adding, "If you've got something to say, say it directly."

As Sanders attempted to reply, Clinton continued, saying, "I think it's time to end the very artful smear that you and your campaign have been carrying out in recent weeks," prompting boos from some audience members, before saying that both candidates agreed regarding reforming campaign finance laws.

"Let's talk about issues, all right?" the senator responded. "Let's talk about why, in the 1990s, Wall Street got deregulated. Did it have anything to do with the fact that Wall Street spent billions of dollars on lobbying and campaign contributions? Well, some people might think, yeah, that had some influence."

Sanders went on to cite the pharmaceutical and fossil fuel industries as examples of outside interests that stifle government reforms.

"Do you think there's a reason why not one Republican has the guts to recognize that climate change is real, and that we need to transform our energy system?" he asked. "Do you think it has anything to do with the Koch brothers and ExxonMobil pouring huge amounts of money into the political system? That is what goes on in America."