WATCH: Fox News hosts insanely argue students should have access to guns, not condoms in school 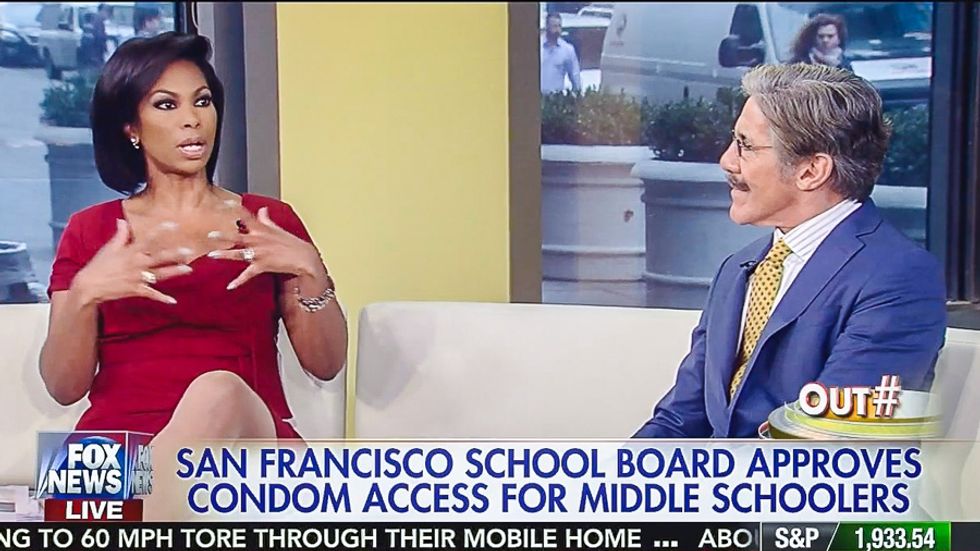 The hosts of Fox News' Outnumbered argued on Wednesday that students were responsible enough to carry firearms at school, but not condoms.

Host Andrea Tantaros noted that faculty at the University of Houston had warned that the state's new open carry law could threaten free speech on campus.

"Professors are advising each other to avoid sensitive topics in class if students are armed," Tantaros explained.

"They are not telling their faculty to do this based on anything that's actually happened," co-host Sandra Smith said. "They're making these statements based on fear and fear alone. There's no evidence that this isn't going to go well or this isn't going to work out or students or going to act in any different way [because some of them are armed]."

Tantaros concluded the segment by suggesting that armed students could have prevented the mass shooting at Virginia Tech -- and then turned her attention to a San Francisco school board that had approved a proposal to give middle school students access to condoms.

"They're not just putting the bucket out there like trick-or-treat, you do have to talk to somebody," Tantaros admitted. "But I do agree with you, Geraldo. I think it's too soon for these middle schoolers. I think they should focus on education, reading, writing, arithmetic."

"I know this is such a highly sexualized culture and it's happening younger and younger and younger," she observed. "With the AIDS scare, a lot of people in the past decades were using protection more. And new, young kids are having sex earlier. They don't have the same confrontation that certain generations did with the AIDS crisis. And there is concern kids are having sex sooner and sooner and they're having unprotected sex."

Tantaros added: "It's just the job of the parents to educate their children [about sex]."

In the end, most of the hosts did agree that it would be acceptable for middle school students to have access to condoms with a parent's permission.

Watch the video below from Fox News' Outnumbered, broadcast Feb. 26, 2016.

The most impressive fundraising number in the 2022 election cycle belongs not to a gubernatorial candidate or U.S. Senate hopeful, but to a first-term state senator seeking re-election.

Sen. Wendy Rogers, a Flagstaff Republican who has made herself into a national figure by falsely claiming the 2020 election was rigged against former President Donald Trump, announced on Thursday that she raised nearly $2.5 million last year. According to online campaign finance records, which go back to 2002, the figure is a new legislative record, shattering the mark set by Rogers herself in 2020.