WATCH: Reporter at Trump rally gets slammed to the ground by a Secret Service agent 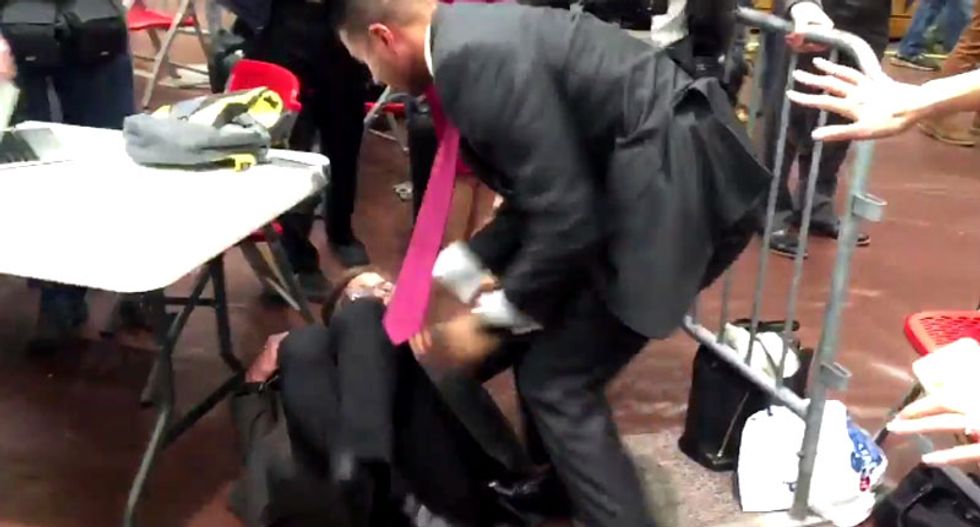 A photojournalist was tossed to the ground by a U.S. Secret Service agent and then escorted out of a Monday afternoon rally for presidential candidate Donald Trump in Radford, Virginia.

Video captured by Washington Examiner reporter Gabby Morrongiello and Independent Journal reporter Joe Perticone shows the journalist, Chris Morris, on the ground on his back as he kicks at a security guard.

This is how reporters are treated at Trump rallies pic.twitter.com/hMxuEoKVeG

A third video, uploaded to Instagram, shows the agent grab Morris by the neck and then slam him to the ground.

According to Trump's campaign, the security guard was a member of the U.S. Secret Service.

"There was an incident involving a photographer and a USSS agent at today’s Radford University Trump rally," Trump's spokeswoman Hope Hicks told The Hill. "We are not aware of all details surrounding the incident and all future inquiries should be directed to local law enforcement. "

The Pendulum reporter Bryan Anderson said Morris ended up on the ground "after pushing a member of security to fight for positioning to take a photo." Morrongiello said Morris was "thrown to the ground while trying to exit the press pen."

Video captured by Anderson shows Morris being escorted out of the event.

Chris Morris gets thrown out after pushing a member of security to fight for positioning to take a photo. pic.twitter.com/EnoAiOYQ4H

"I stepped 18 inches out of the pen and he grabbed me by the neck and started choking me then he slammed me to the ground," Morris also told CNN's Jim Acosta.

Time photog Chris Morris tells me how he was grabbed and taken down at Trump rally pic.twitter.com/XKDJarpXda

Morris was apparently let back into the event after being detained by police, and shook hands with the security guard.

(This article has been updated.)