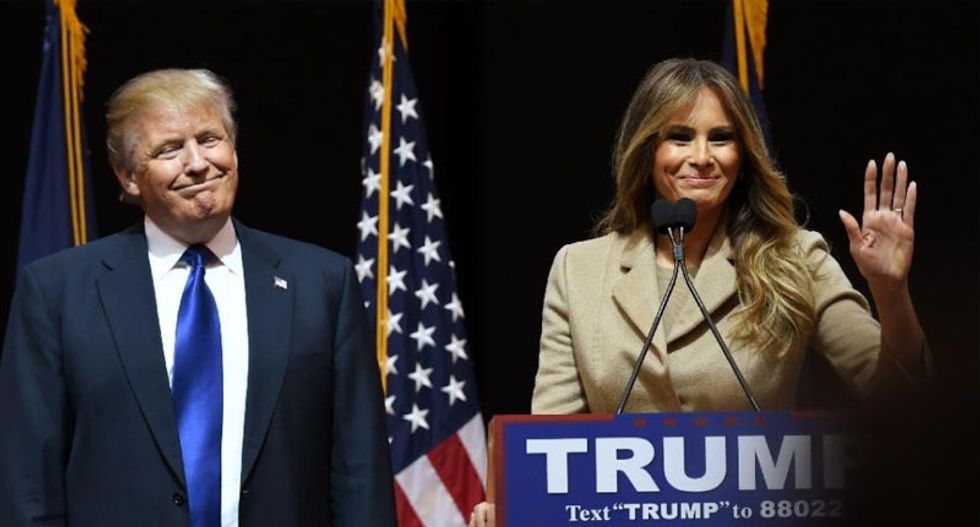 In December 1999, a writer for the New York Times asked the Slovenian-born model Melania Knauss a question that at the time seemed quite fanciful. If her then boyfriend Donald Trump ever made it to the White House, what kind of first lady would she be?

Trump was at that point running for the presidential nomination of the Reform Party and his chances of going all the way to the Oval Office were zero. Besides, his relationship with Knauss was barely a year old. But 16 years later, that question is starting to sound remarkably prescient.

Now Trump is running for the Republican nomination and Tuesday’s victory in Nevada, his third in a row, forced Americans to think the unthinkable : the property developer with the implausible hair really might pull off the GOP nomination. From there it takes but a small leap of imagination to conjure up an unnerving vision: President Trump.

“I would be very traditional,” she said. “Like Betty Ford or Jackie Kennedy. I would support him.”

The picture of the traditionally demure political spouse sums up Melania Trump’s approach to the campaign trail this year. To appreciate just how low-key she has been, standing beside her man at rallies but rarely speaking, compare her with Michelle Obama.

At this point in 2008, Obama was causing headaches for her husband during his first presidential run by making edgy comments in her solo stump performances. She caused a storm of conservative indignation by saying that “for the first time in my adult life, I am really proud of my country” – a remark that was interpreted as revealing a lack of patriotism.

The 45-year-old Melania Trump, by contrast, has stuck in her rare appearances at the podium to bland generalities, uttered with a thick Slovenian accent. At a rally with her husband in Spartanburg, South Carolina, last weekend, she regaled the crowd with nothing more revelatory than the promise that her husband “will be the best president”.

But blandness in public should not be mistaken for blandness of character, and there are signs that she is beginning to emerge from the passive role she has been playing.

On Thursday she told MSNBC’s Morning Joe that her backstage demeanour has been entirely intentional, as a means of ensuring that life remained as “normal as possible” for her nine-year-old son, Barron.

(In Trump’s world normality is a relative concept: Melania recorded the interview seated on a gold-plated chair in a room in their Trump Tower penthouse that looked more Versailles than Manhattan.)

Melania Trump was born in 1970 and grew up in the tiny Slovenian town of Sevnica (population, 5,000). A life of relative obscurity might have followed had a fashion photographer not spotted her when she was a student at the University of Ljubljana, and whipped her off to a modelling career in Milan and Paris.

That brought her to New York in 1996, and to a party at the Kit Kat Club two years later where she was introduced to Trump, 24 years her elder and separated at the time from his second wife, Marla Maples. They married in 2005 at his own Mar-a-Lago Club resort in Palm Beach, inviting 450 guests including Hillary and Bill Clinton.

Were Trump to succeed in confounding his critics and taking the keys to the White House – no doubt rebranding it within months as Trump House – his wife would become the first foreign-born first lady since 1825 (following English-born Louisa Adams, spouse of John Quincy Adams).

Her immigrant status is paradoxical, given Trump’s tirades against Mexican “murderers” and “rapists” and his pledge to build a wall along America’s southern border.

But she is having none of it, dismissing the irony of her situation by insisting there is nothing in common between her and the 11 million undocumented people living in the US who her husband has vowed to round up and mass-deport.

“I follow the law,” she told MSNBC. “I never thought to stay here without papers. I had visa.”

Her punchy riposte gave a fleeting glimpse, perhaps, of the real Melania Trump. Beneath that polished veneer of the international model, armed with her own Melania™ trademark and QVC line selling $150-an-ounce moisturizer infused with caviar , lurks a street-fighter as up for the coming brawl as her pugnacious husband.