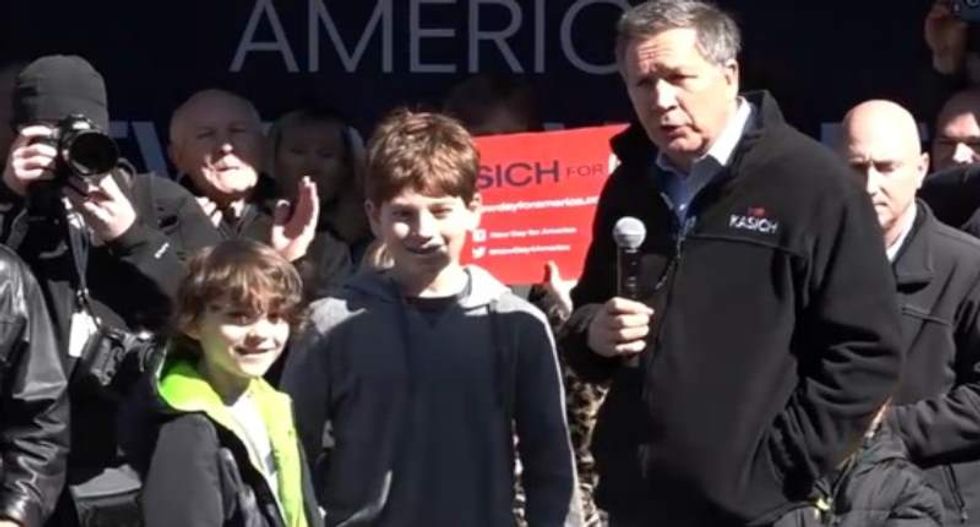 Banking on the well-established fact that young people are more likely to listen to elder Republican statesmen than their peers or favorite celebrities, GOP Presidential candidate John Kasich has a message for the kids: Don’t do drugs! The Ohio governor has started dragging young people up to the stage at his campaign events and demanding that they avoid illegal substances, ABC reports.

“Do you know you’re made special? Do you know that? You want to make a commitment to get your buddies to realize that you don’t mess around with drugs? Huh?” he told two boys in South Carolina.

At an event in Michigan Monday, the Republican Governor also proved he’s hip to the kinds of shenanigans that go on at college parties.

“I beg you. When you go to that party, OK, and you’re having the second drink or the third drink, OK, and the bowl of pills that’s over here on the side. Don’t go near ’em,” he told students at Grand Valley State University.

Yes, the bowl of pills at the party—the one next to the lasagna-tray full of heroin-needles and the platter of blow. At close to a dollar a milligram, your average college student probably isn’t rolling out cereal-sized bowls of opioids.

Kasich’s anachronistic, Nancy Reagan-esque “Just say no” campaign is part of his official strategy for battling the opioid problems that continue to ravage his state (the death rate from accidental poisoning in Ohio jumped 366% between 2000 and 2012, according to the state department of Health.) In his State of the State speech in 2015, Kasich promoted, “Start Talking,” a program for for parents and other authority figures to talk to young people about drugs.

“If a young person hears “do not do drugs,” there is a 50 percent less chance they will ever do it. A 50 percent less chance,” Kasich said then. “Now, in your districts, you can spread it. We’ve spoken now, I think—well, I know the last time I checked—to over 26,000 kids. We’ve gotten teachers involved. And, ladies and gentlemen that are here in Wilmington, I don’t care where you are. You’re in a restaurant? You walk over there and you see those kids. You tell them to stay off the drugs.”

Kasich appears to be citing a statistic from a 2006 study by the Partnership for Drug-Free Kids that found kids are half as likely to use drugs if they discuss the associated risks with their parents. The study doesn’t say much about strangers at restaurants or John Kasich telling them to avoid all drugs forever. That strategy has obvious set-backs in terms of basic human—especially teenaged—nature.

“Telling people they can’t do something, which they think they ought to be able to do, elicits ‘reactance motivation’ or forbidden fruit syndrome,” Ruth C. Engs, Professor Emeritus of Applied Health Science at Indiana University tells The Influence. A 2009 meta-analysis of 20 studies on the effectiveness of DARE, the most widely adopted abstinence-based program, found it had a “less than small effect on reducing drug use.”

“Too often, the schism that exists between what we tell them and their own lived experiences provokes cynicism, mistrust and even more curiosity,” says Jerry Otero, youth policy manager at the Drug Policy Alliance. “So much so, that once they are out on their own, many young folks seem primed for overindulgence. That is why “Just say no” just doesn’t work.”

Otero adds that while “just say no” campaigns might work with very young kids, they have little-to-no effect by the time children get to middle and high school. In fact, one study showed that “scared straight” programs made kids more likely to start smoking cigarettes and drinking.

Speaking of scientific evidence, Kasich has either opposed or been silent on one policy that’s been proven to save lives: funding needle exchanges that help stem the spread of HIV and Hepatitis C. In the past the governor has voted to uphold the ban on federal funding for needle exchanges. Kasich’s press secretary failed to explain the governor’s position in response to a query by Politico. (On a positive note, the Governor has voted to make naloxone, an antidote to opioid overdose, available without prescription.)

Otero notes that although DARE’s been on the decline, its approach still dominates.

Watch a supercut of Kasich's appearances with children on the campaign trail, as posted by ABC News, below.