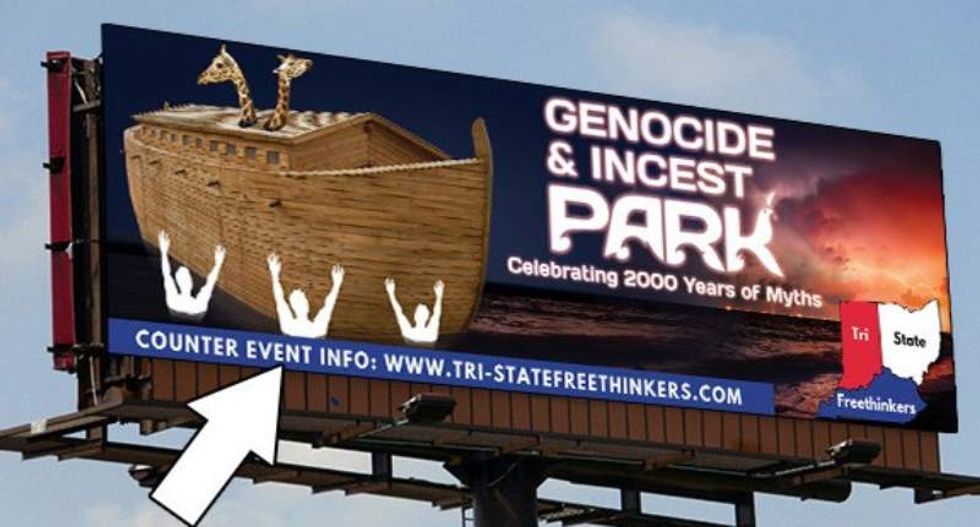 An atheist group has organized a fundraising campaign in order to mock the $101 million "Ark Encounter" theme park due to open in Kentucky this July.

According to columnist and author Dan Arel, the Tri-State Freethinkers are seeking to raise $2,000 in order to erect billboards calling the facility "Genocide and Incest Park."

"The park celebrates a biblical parable of genocide and incest," the group says on its Indiegogo page. "While they have a legal right to celebrate their mythology, we find it immoral and highly inappropriate as family entertainment."

The park, which was created by a group headed by creationist Ken Ham, will include a a 510-foot model of Noah's Ark, as well as teaching exhibits based on the premise that the flood Noah and his family were escaping on the vessel separated the world's continents.

"They are portraying the story of Noah's Ark as an actual historical event. This is scientifically not possible," the Freethinkers said on the campaign site.

One of the rewards in the campaign includes a chance for donors contributing $500 to have their picture displayed on the billboard -- depicting them as they "drown" under the Ark.

"Give a face to the millions who lost their lives in the fabled flooding," reads the note for donors. "You will also receive a poster of the billboard, the Rain Poncho of Protection and definitely a thank you note."

According to the Freethinkers, the first $2,000 raised would go toward setting up one small billboard on a state route for one month. For $6,000, they will erect six small billboards or a larger one along an interstate. And if they should raise $150 million, they said, "we will build our very own Genocide & Incest Park and ask for state tax incentives and we will not [discriminate] during hire."

Watch a short video explaining the campaign, as posted online, below.