#BernieMadeMeWhite: Meet the Black writer who called out the media for erasing people of color 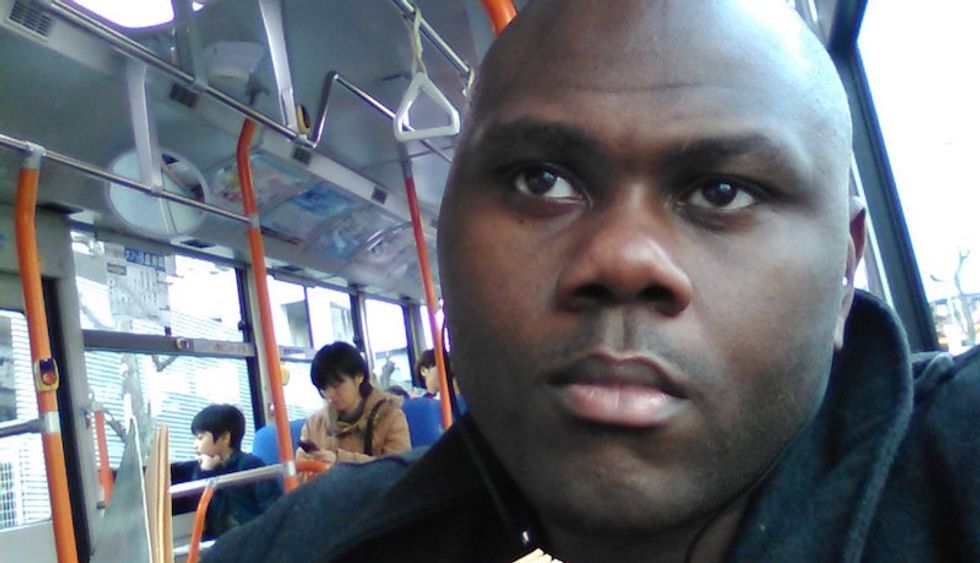 Leslie Lee III is a writer and English teacher from Baton Rouge, LA who lives in Yokahama, Japan with his wife, Kelly, and their dog, Taco. His writing ranges from essays and articles on politics and Japanese wrestling, to the novel he is working on with his father about Kentucky’s Black coal miners. But according to some sources, Lee does not actually exist. He's a figment of the imagination. Because he's both Black and a supporter of Bernie Sanders.

The nice thing about the notion of the unbearable whiteness of being a Sanders supporter is that it doesn't need to be based in reality. On Saturday, for example, CNN attributed Sanders' landslide victories in Alaska, Hawaii and Washington primaries to the whitey-mcwhiteyness of the states:

These caucus states -- largely white and rural -- are the type of places Sanders traditionally does well. In order to win the nomination, he must replicate this success in other, more ethnically diverse states that hold primaries, as he did in Michigan last month. In theory, it's possible. But the reality is tough.

Likewise, in theory, it's possible to portray these states as white. But the reality is tough. Because they're not. Washington state is literally the seventh most diverse state in the Nation. Two (if not three) of the five most diverse counties in the country are found in Alaska, which CNN itself described as "the most diverse place in America," in an article in January. And Hawaii, according the Pew Research Center,

stands out... more than any other state... when it comes to its racial and ethnic diversity... The Rainbow State has never had a white majority. In fact, non-Hispanic whites, the largest group in most states, account for only 23% of the population, according to 2013 census figures.

But you know the old adage, necessity (to correct irresponsible journalism and media bias) is the mother of (viral) invention. And So, Mr. Lee launched his epic #BernieMadeMeWhite hashtag, mocking the idea that all supporters of Sanders are white. Its debut appearance was:

I decided I would ask Mr. Lee, or @tokyovampires as he's known on Twitter,  about what inspired the hashtag, though merely ignoring it and him would have been a very meta demonstration of the very erasure he's protesting.

He explained, "The common narrative in this election that Bernie has a ‘minority problem’ or that all his supporters are ‘bros’ is pervasive, and insulting to the POCs [People of Color] and women who support [him]." But, "it hit a peak... when Hawaii, the least white state in the nation, retroactively became white or 'not diverse' due to the fact that Bernie won it. So, I started #BernieMadeMeWhite."  And, Lee tweeted to me, "since my real existence as a black person who supports Bernie is ignored...  might as well embrace my new whiteness."

Lee was kind enough to answer some more questions over e-mail, probably out of a sense of solidarity, since I'm a female Bernie bro and don't really exist either.

Katie Halper: What are your feelings on Sanders and Clinton? Why do you support Sanders?"

Leslie Lee: I think if you're a progressive there's a clear choice in the Democratic primary. There is a candidate who has consistently stood for the things I believe in, and wants to take the country in the direction it needs to go. Sanders isn't perfect, but he's the most progressive candidate I've seen in my lifetime and has earned my full support. I did not expect I would be participating in this election, but Sanders is such a great candidate I could not sit this out, no matter how dissatisfied I am with the Democratic Party.

Hillary Clinton is a deeply flawed candidate. Her history of warmongering, racism, and corruption make it impossible for me to support her.

KH: What are some of the worst examples of the erasure you are responding to with your hashtag?

LL: It's impossible to know where to start. Google "Sanders + race" and you'll get the impression that Bernie Sanders and all his supporters are white nationalists. Some prominent writers have even said as much in order to paint his campaign as just a mirror image of Trump's. In reality, Sanders is the only candidate still in the race without a decades long history of racism. Ted Cruz, Donald Trump, and Hillary Clinton are racists, period. Bernie Sanders is not.

It's true that Hillary Clinton has had overwhelming support from older black folk in the early southern states, but there's more to blackness than that and more to POC than blackness. Women who support Bernie have been erased too, even though he often garners equal support!

KH: Have there been any meta responses to your hashtag that only prove just how people refuse to acknowledge the existence of people of color who don't fit into the model they would like you to fit into?

LL: Someone called the hashtag "tone-deaf" because on the US Census many Hispanics identify as white. I'm still trying to figure out what exactly that means, but he blocked me when I pointed out all the hispanics using the hashtag who did not identify as white. There's also been a number of late comers to the tag saying, "See, this is exactly how offensive white Bernie supporters are." I'm sure they didn't bother looking at the tag before launching an accusation of racism against Bernie supporters.

KH: Have you gotten positive responses from other people of color to your hashtag?

LL: Many! I knew it would be trending in a few hours because I was just expressing a frustration that every Bernie supporter has to deal with. I've pointed out that Bernie supporters may seem aggressive online because their perspectives have been shut out of the media, but that goes even more for female Bernie supporters and POCs.

KH: Do you ever think that the alleged Clinton supporters who do things like claim Black or Latino supporters of Bernie Sanders don't exist are undercover Bernie plants? How could they not get that this would be #PRFail?

LL: If you watch just CNN and MSNBC and read the Washington Post you can create a little bubble for yourself where Bernie Sanders is just some cooky old white guy that a few dumb white guys like. If you encounter something that pierces that bubble, the Jonathan Capeharts and Amanda Marcottes of the world will write a thinkpiece to repair the tear before you log off Facebook.

However, women who support Bernie and POC who support Bernie will remember this in November if Hillary is the nominee. Most will be willing to forgive, but a lot won't. It's terrible strategy on the part of Clinton and her surrogates to erase us, because they're going to need us very soon.

KH: Do you think the people perpetuating myth that Sanders' support is all white believe it or are cynically spreading it?

LL: It's always a bit of both. They believe it, people like me call it out, they cynically come up with some reason why a voice like mine doesn't matter, they go back to believing it.