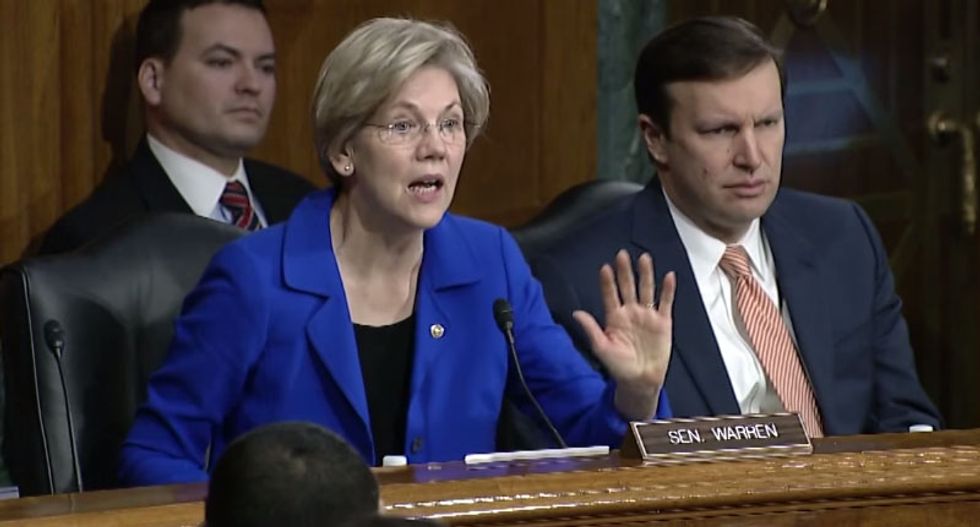 Senior House Financial Services Committee member, Rep. Blaine Luetkemeyer (R-MO) told a conference of bankers Wednesday morning that they needed to "find a way to neuter" Sen. Elizabeth Warren, according to Politico. Luetkemeyer was at an American Bankers Association conference in Washington when he made the remark, also calling Warren "the Darth Vader of the financial services world."

According to Allied Progress, Luetkemeyer is an old friend to the banking and predatory lending industry, receiving more than $1 million in campaign donations from the industry.

He's also scored more than $63,000 from predatory payday lenders which Senator Warren sought to put out of business with a bill she proposed in 2014 that would replace them with the United States Post Office. Nearly one in ten service members end up taking out loans from these sketchy lenders with high interest rates and end up crushed under the weight of debt. "When these financial predators come after them I feel ashamed for the rest of us," Warren said on an episode of "Taking The Hill."

Luetkemeyer sponsored HR 766 last year, a bill that would close a Department of Justice (DOJ) effort that targets unscrupulous lending practices. In 2012, he proposed another bill that would weaken oversight of payday lenders by enabling them to skirt the regulatory authority of Warren's previous project the Consumer Financial Protection Bureau and state laws that have just as much oversight or stronger.

“Rep. Luetkemeyer’s remarks on Senator Elizabeth Warren at the American Bar Association meeting earlier today were offensive, sexist and out-of-line," Nita Chaudhary, co-founder of UltraViolet, a women's rights advocacy group, said. "Comments like these, which sound eerily similar to something that Donald Trump would say, have no place in American politics and speak to the impact that Donald Trump is having on the discourse coming out of the Republican party. Luetkemeyer should immediately apologize to Senator Warren for his offensive language. There is plenty of room for disagreement in Washington, but resorting to sexist name-calling should have no place in our political discourse.”

Warren's life's work has been fighting for consumers and against powerful corporations and special interests. Banks have always hated Warren for highlighting weak consumer regulations, working to stop mortgage abuses from lenders and end junk bank fees. Warren crusades onward; her latest has been a collaborative effort to make college more affordable and accessible.