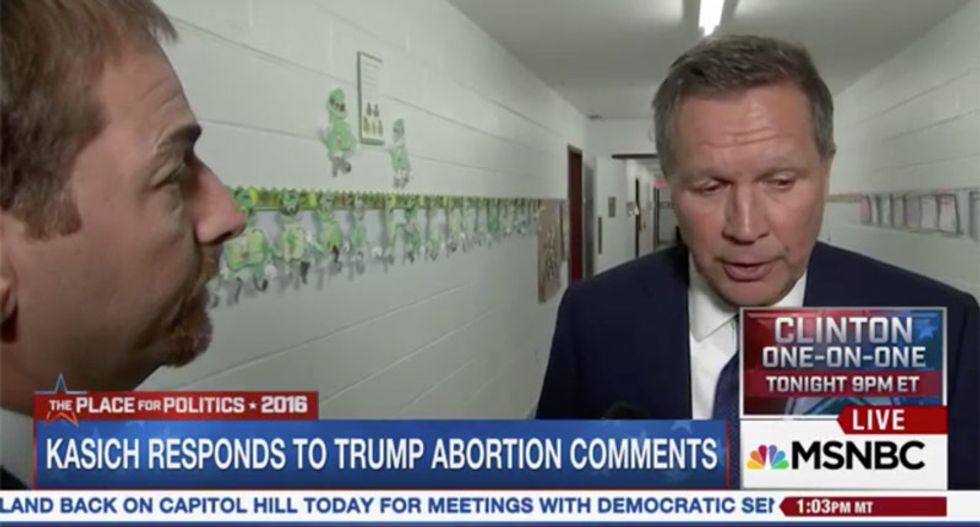 The other Republican campaigns are responding to Donald Trump's statement that after banning abortion, there should be "some form of punishment" for women who get them. But while his GOP rivals all oppose the idea, none of them are actually offering a fully thought-out reason for why not.

"No, absolutely not," John Kasich told Chuck Todd on MSNBC. "And I mean, I do have exceptions for rape, incest, and life of the mother. But of course women shouldn't be punished. Look, you know, I think probably Donald Trump will figure out a way to say that he didn't say it, or he was misquoted, or whatever. But I don't think so. I don't think that's an appropriate response, and it's a difficult enough situation to try to punish somebody."

.@JohnKasich reacts to Trump's abortion comments: "Of course, women shouldn't be punished" for having an abortion https://t.co/bLyaNPVGoE

"Let me ask you this," Todd responded. "How do you enforce a ban on abortion?"

"Well, look, I think it's rape, incest, life of the mother, and you build some restrictions around it," Kasich said. "But I think you have to be very careful in the way you do it. We're a long way from there."

Ted Cruz has not yet responded publicly. But the Cruz campaign's rapid response director, Brian Phillips, duly responded in a rapid fashion — by tweeting out that Trump is simply a fraud on the issue. Here are the highlights of his tweets — which literally begin by telling people not to think too much about the idea:

"Sen. Cruz shares the views of the pro-life movement, which for years has focused on punishing those who perform the abortions — not the women who get them," Sweet declared. "And unfortunately, this has been another example of Donald Trump misstepping. Why? Because he's a charlatan. This is a man who for the vast majority of his life didn't just embrace abortion — he embraced extreme forms of abortion, all the way to partial-birth abortion."

Cruz campaign: Cruz focuses on punishing those who perform abortions, not women who get them https://t.co/GRrUbWpzGE https://t.co/7am5Tcd7AG

UPDATE, 6:30 p.m. ET: The Cruz campaign released a statement in the evening from the candidate himself, voicing his disagreement with Trump's comment.

"Once again Donald Trump has demonstrated that he hasn’t seriously thought through the issues, and he’ll say anything just to get attention," Cruz said. "On the important issue of the sanctity of life, what’s far too often neglected is that being pro-life is not simply about the unborn child; it’s also about the mother — and creating a culture that respects her and embraces life. Of course we shouldn’t be talking about punishing women; we should affirm their dignity and the incredible gift they have to bring life into the world."