Disappointed Trump pauses at quiet rally ahead of key primaries: 'Is there a disrupter in the house?' 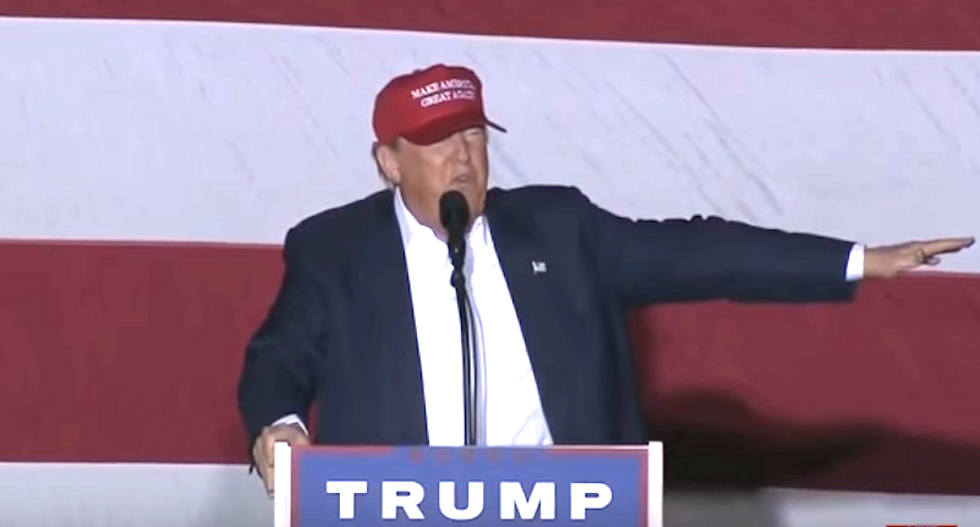 Republican presidential front-runner Donald Trump faced his last day of campaigning on Monday before a potentially crucial round of nominating contests as tensions swirled following recent clashes with protesters at his rallies.

The billionaire businessman's campaign stops have become marked by outbreaks of shouting and shoving between Trump supporters and a stream of protesters, who have sought to disrupt the events because of what they decry as his bigoted rhetoric.

While Trump's campaign has taken unusual twists and turns, it veered into new territory over the weekend. He canceled a big rally in Chicago over security after protesters swarmed the event Friday, sparking clashes. He was rushed by a man on an Ohio stage and repeatedly blamed Democratic rival Bernie Sanders for the protesters' actions. Trump refused to take responsibility for the uptick in tensions.

His stance and the protests add a new twist to nominating contests in Florida, Illinois, Missouri, North Carolina and Ohio on Tuesday, another key day for both Republicans and Democrats seeking their parties' nominations for the Nov. 8 election to succeed Democratic President Barack Obama.

After a strong start that has surprised veteran campaign watchers, Trump leads in delegates over second-place Ted Cruz, the U.S. senator from Texas, and could seize control of the race with big wins on Tuesday.

Political analysts are hesitant to say whether Trump's advance to the nomination might be slowed by the charged events at his rallies.

"It will help Trump among hard-core Republicans and hurt him among independents," said Frank Luntz, a Republican pollster.

"It will help him among those who resent the left and their protests and their disruptions. But it will hurt him among independents who don't like the chaos and the confusion."

'Disrupter in the house?'

Polls showed Trump holding firm leads in all the states voting on Tuesday other than Ohio, where he was roughly tied with that state's governor, John Kasich, who is seen as needing to win in his home state to stay in the race.

U.S. Senator Marco Rubio, a favorite of the party establishment, has staked his survival in the campaign on defying polls and winning in his home state of Florida.

On the Democratic side, former first lady and secretary of state Hillary Clinton has a decent chance to pull away from Sanders on Tuesday. But her loss to him last week in Michigan, which shocked pollsters who believed Clinton had a double-digit lead, underscores the left-leaning U.S. senator's ability to surprise.

At a town hall on Sunday night, the two Democrats had to first devote time to talking about their concerns about Trump, who they both say is inciting violence at his rallies, before getting down to their battle with each other.

Trump has proven to be a polarizing candidate, not only for the American electorate but also for the Republican establishment. His calls months ago to deport millions of people who are in the country illegally and to put a temporary ban on Muslims visiting the United States are often cited by the protesters as reasons to organize and disrupt his rallies.

After an eventful weekend hopping between locations, Trump will jet on Monday among three states, where protesters have promised to keep up the pressure.

A Sunday night event in Boca Raton in Florida passed much more quietly, and a note of disappointment crept into Trump's voice.

"Do we have a protester, anyone?" he asked the crowd after noting that protesters help draw news cameras' attention to the size of his crowds. "Is there a disrupter in the house?"

This time, there was not.

Watch the entire speech posted online by Right Side News: