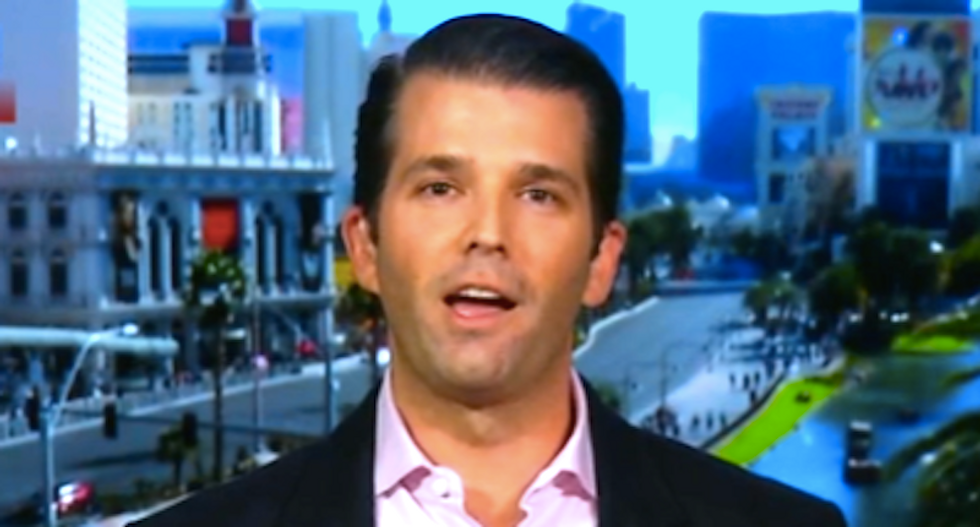 Donald Trump Jr, the eldest son of the Republican presidential frontrunner and one of his political surrogates, has granted a 20-minute radio interview to a prominent white supremacist who broadcasts what has been dubbed as “the primary radio nexus of hate in America”.

The younger Trump will be featured as guest of honor in Saturday’s broadcast of the Political Cesspool, a three-hour program that lists among its objectives “to grow the percentage of Whites in the world relative to other races”. The show is presented by James Edwards, an avowed white nationalist who is pro-slavery and whose previous guests include the former grand wizard of the Ku Klux Klan David Duke as well as a raft of Holocaust deniers and neo-Nazis.

Edwards was granted credentials by the Trump campaign to appear as a bona fide media reporter at a recent stump appearance by the real estate billionaire in Memphis. He was given a media badge and a VIP parking slot before enjoying one-to-one time with the candidate’s son.

In a blog posted on his white nationalist website, Edwards said that his experience at the rally “lived up to my expectations”. In glowing terms, he said that his hopes for Trump’s candidacy had been proven right – Donald Trump was the leader “our people” had been waiting for.

“Our people just needed a viable candidate and they’ve identified Trump as that man. There is no doubt that Trump’s populism and nationalism is galvanizing our nation and may change the course of American history for the better right before our very eyes.”

Edwards went on to praise Trump’s “masculine attitude” as a “prototypical alpha male” and said he was supporting his candidacy because “because immigration is the single biggest problem that our nation needs to solve. Demographics is destiny.”

The granting by the Trump campaign of such intimate media access to a core racist outlet can only add to the controversy surrounding the Republican frontrunner’s links to white supremacy. On Tuesday the Republican Speaker of the House, Paul Ryan, publicly rebuked Trump by saying that anyone running for his party’s presidential nomination had to “reject any group or cause that is built on bigotry”.

Ryan’s rare put-down came after Trump refused to disavow the prominent advocate of race hate and former Ku Klux Klan grand wizard David Duke in the course of a CNN interview over the weekend, although he had done so the previous Friday.

In sitting down with James Edwards for a radio interview, the younger Donald Trump has put himself among strange bedfellows. Duke has made regular appearances on the Political Cesspool and has returned the compliment by lauding the show’s presenter as his “favourite radio patriot”.

The Political Cesspool is sponsored by the Council of Conservative Citizens, the white supremacist website that was claimed as an inspiration by Dylann Roof, the suspected mass shooter accused of murdering nine black worshippers at the Mother Emanuel church in Charleston last June. Edwards was honored at the Council of Conservative Citizens’ annual conference in 2007.

According to the Southern Poverty Law Center , which monitors US hate groups , the Political Cesspool is “a leading forum for neo-Nazis, Holocaust deniers, and white supremacists”. Edwards’s strength and danger, SPLC says, is in “smoothly injecting white nationalist ideology into national mainstream media discussions of race relations and crime in America”.

Among Edwards’s controversial positions is his support for slavery. He has said that “slavery is the greatest thing that ever happened to” African Americans.

His show is broadcast from Memphis, Tennessee, between 6 and 9pm central time every Saturday. The Political Cesspool says it will be carrying a feed of the Trump Jr interview on its website this weekend.