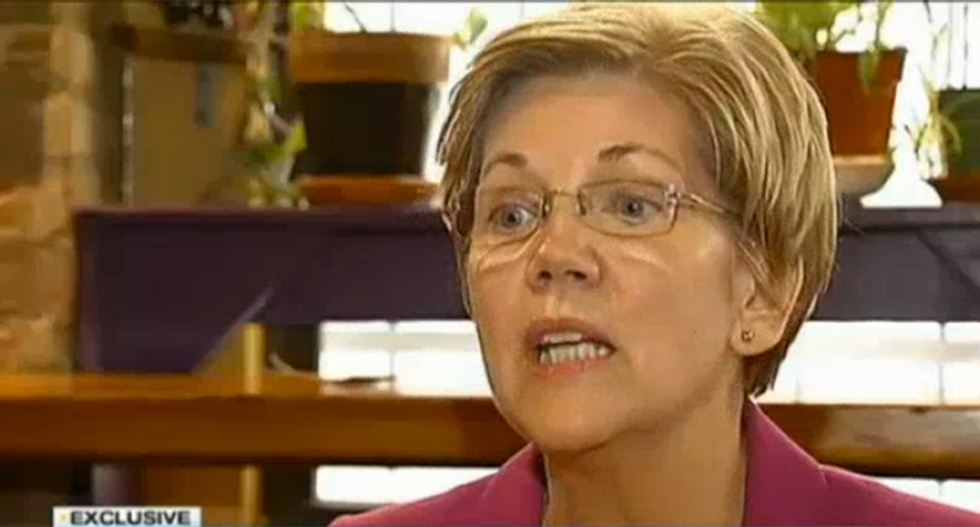 In an interview with Massachusetts NECN News, Elizabeth Warren didn't hold back on how much disdain she has for GOP front-runner Donald Trump. She also didn't have any friendly words for former Massachusetts Governor Mitt Romney who recently came out against Trump in a lengthy press conference that only helped Trump in the polls.

"Where was Mitt Romney for the last eight years? I'm sorry, where was Mitt Romney since he ran for president?" Warren asked rhetorically in a conversation with NECN's Alison King at a restaurant in Roxbury. Romney's press conference last week was the first time Romney attacked Trump, his business dealings and his rhetoric since Trump announced his candidacy nine months ago.

When questioned about the violence that broke out in Chicago Saturday prior to a Trump rally, Warren blamed Trump himself. "This is on Trump," she said. "This is what Trump has been fostering and fermenting for months now. And it finally reached the next level. I think people are worried about what this means. We're in a new space and we're trying to figure out, how do we describe this?" Warren also continued that she thinks Democrats should be speaking out more loudly about what is going on, on the Republican side as well. "I think we need to get up and we need to stand strong. We need to speak from the heart and speak loudly."

She also said that the GOP's blockade of President Obama's Supreme Court nominees is the epitome of extremism. "And it is the kind of extremism that has nursed and nurtured Donald Trump and Ted Cruz," she said.

In a speech on the Senate floor Friday, Warren echoed the same sentiment saying that the blockade is just part of a long line of Republican obstruction. "The refusal of the senators to execute the most basic Constitutional duties of their office is shocking, but it is not new.” She went on to read Article II of the Constitution which outlines the role of the president on selecting a justice. “There is no secret clause that says, ‘Except when that president is a Democrat.’ But for seven years that’s how Republicans in the Senate have acted.

"The message couldn’t be clearer,” Warren continued. “No matter how much it damages the nation, no matter how it undermines the courts, no matter, whether it cripples the government or lays waste to our Constitution, senate Republicans do pretty much everything they can to avoid acknowledging the legitimacy of our democratically elected president.

Warren still won't specify whether she's throwing her support behind Hillary Clinton or Bernie Sanders but merely thinking about the idea of Trump being the front-runner is disturbing. "I am not happy to see Donald Trump even threatening to get anywhere near the presidency. Don't take me there," she said. "That is a form of extremism. He advocates a form of ugliness that I don't want any part of."