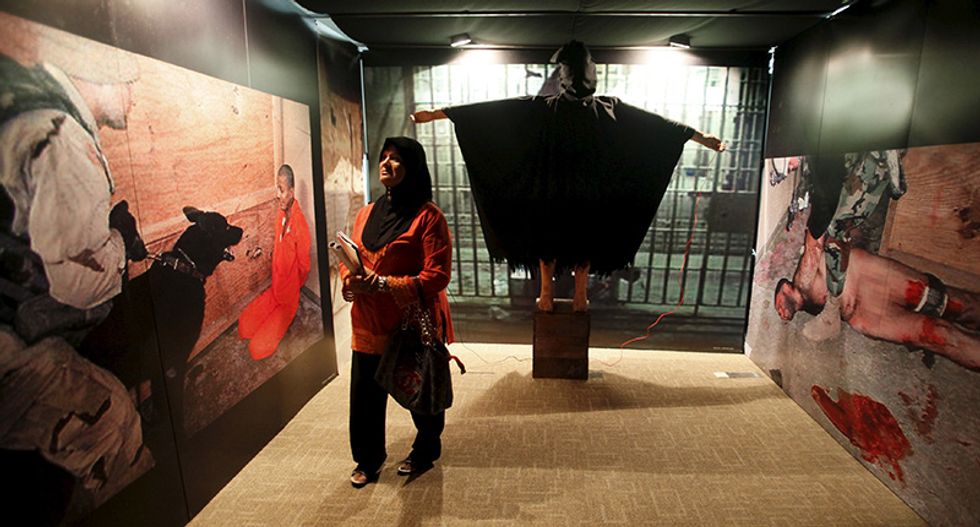 A life-size mannequin called "Man in the Hood" is displayed at the "War Is A Crime" exhibition in Kuala Lumpur in this November 19, 2011 file photo. REUTERS/Bazuki Muhammad/Files

Nearly two-thirds of Americans believe torture can be justified to extract information from suspected terrorists, according to a Reuters/Ipsos poll, a level of support similar to that seen in countries like Nigeria where militant attacks are common.

The poll reflects a U.S. public on edge after the massacre of 14 people in San Bernardino in December and large-scale attacks in Europe in recent months, including a bombing claimed by the militant group Islamic State last week that killed at least 32 people in Belgium.

Donald Trump, the front-runner for the 2016 Republican presidential nomination, has forcefully injected the issue of whether terrorism suspects should be tortured into the election campaign.

Trump has said he would seek to roll back President Barack Obama's ban on waterboarding - an interrogation technique that simulates drowning that human rights groups contend is illegal under the Geneva Conventions. Trump has also vowed to "bring back a hell of a lot worse" if elected.

Trump's stance has drawn broad criticism from human rights organizations, world bodies, and political rivals. But the poll findings suggest that many Americans are aligned with Trump on the issue, although the survey did not ask respondents to define what they consider torture.

"The public right now is coping with a host of negative emotions," said Elizabeth Zechmeister, a Vanderbilt University professor who has studied the link between terrorist threats and public opinion. "Fear, anger, general anxiety: (Trump) gives a certain credibility to these feelings," she said.

The March 22-28 online poll asked respondents if torture can be justified "against suspected terrorists to obtain information about terrorism." About 25 percent said it is "often" justified while another 38 percent it is "sometimes" justified. Only 15 percent said torture should never be used.

Republicans were more accepting of torture to elicit information than Democrats: 82 percent of Republicans said torture is "often" or "sometimes" justified, compared with 53 percent of Democrats. (Graphic: http://tmsnrt.rs/1ShObx1)

About two-thirds of respondents also said they expected a terrorist attack on U.S. soil within the next six months.

Surveys by other polling agencies in recent years have shown U.S. support for the use of torture at around 50 percent. A 2014 survey by Amnesty International, for example, put American support for torture at about 45 percent, compared with 64 percent in Nigeria, 66 percent in Kenya and 74 percent in India.

Nigeria is battling a seven-year-old insurgency that has displaced 2 million people and killed thousands, while al Shabaab militants have launched a series of deadly attacks in Kenya. India is fighting a years-old Maoist insurgency that has killed hundreds.

In November, terrorism replaced economy as the top concern for many Americans in Reuters/Ipsos polling, shortly after militants affiliated with the Islamic State killed 130 people in Paris.

At the same time, Trump surged in popularity among Republicans, who viewed him as the strongest candidate to deal with terrorism. Besides his advocacy of waterboarding, Trump said that he would “bomb the hell out of ISIS,” using an alternative acronym for Islamic State.

"You’re dealing with people who don’t play by any rules. And I can’t see why we would tie our hands and take away options like waterboarding," said Jo Ann Tieken, 71, a Trump supporter.

Tieken said her views had been influenced by the injuries suffered by her two step-grandsons while serving in the military four years ago in Afghanistan.