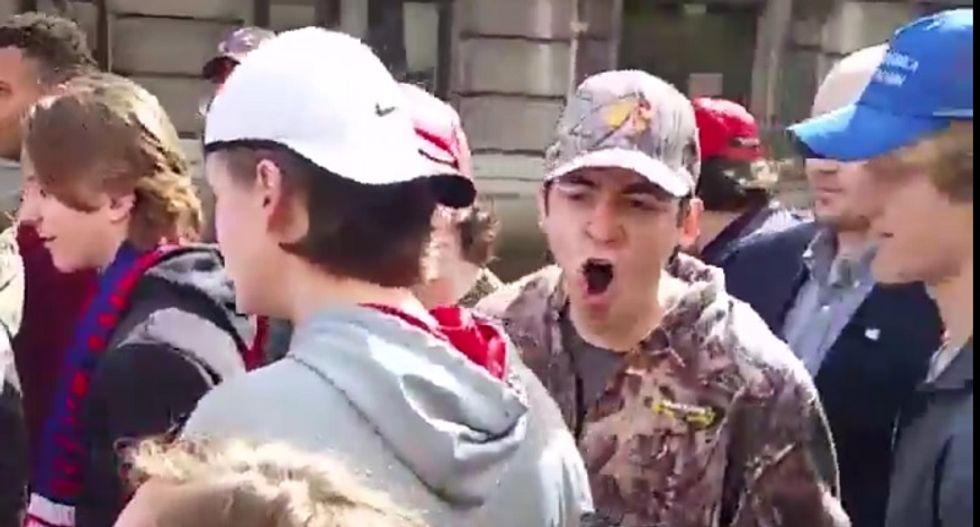 Videos taken of Donald Trump supporters outside a rally in St. Louis, Missouri, show demonstrations of extreme anger, provocation and aggression as the GOP front runner tries to defend himself against criticism that his rallies are becoming dangerous.

According to the St. Louis Post-Dispatch, a massive crowd of thousands waited in line to hear the former reality television star and real estate mogul speak downtown at the Peabody Opera House. But protesters were also in attendance, as become commonplace at Trump rallies.

Trump supporters hurled foul language and hateful words at them. Watch video of high tensions, as posted to Twitter by witnesses.

In this video, a man shouts anti-Muslim slurs and profanity:

Here, a young man calls a woman a "whore" and screams swear words at her:

Hard to believe that anyone would get assaulted at rallies with these sorts of attendees pic.twitter.com/ShhTKouFwL — Lachlan Markay (@lachlan) March 11, 2016

Here, St. Louis police arrest someone after a confrontation got out of hand:

An arrest at the Trump rally in St. Louis (sorry for the video, phone is acting up) pic.twitter.com/wjlcDnJgrR — Junius Randolph (@JuniusRandolph) March 11, 2016

This video shows how tense things are:

Here, a young white man makes motions that show he is ready to get physically violent:

An arrest after an apparent confrontation:

The first arrest. A yelling match nearly turned into a fistfight. The crowd cheered as they dragged him away. pic.twitter.com/YzTsrTApQo — Trymaine Lee (@trymainelee) March 11, 2016