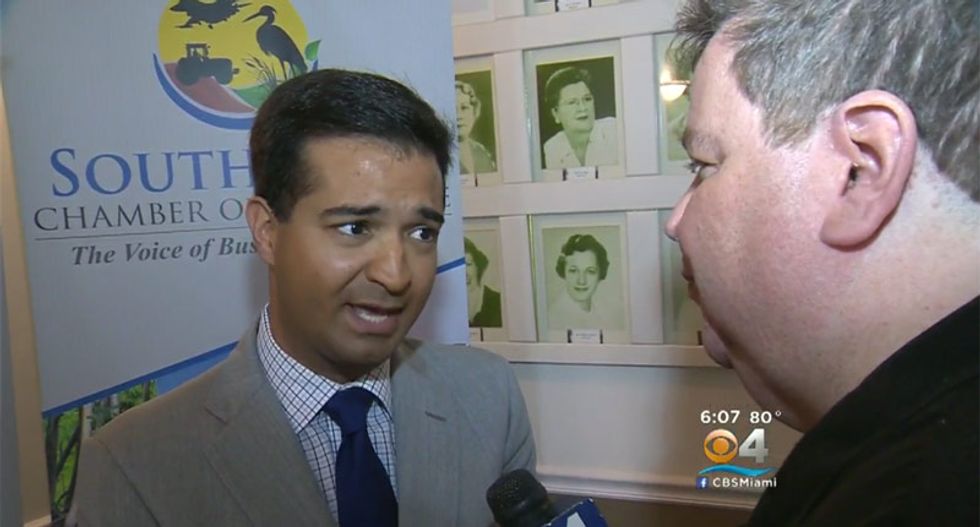 A Republican congressman is now trying to shut down reports that he told a voter in his Democratic-leaning district that he was so much against Donald Trump, he'll actually vote for Hillary Clinton instead.

The congressman in question is freshman Rep. Carlos Curbelo, whose south Florida district has become even more Democratic-leaning after a court-ordered redrawing. A report surfaced on Facebook from local woman Kim Romano, who works at a women's health clinic in Key West, and who posted that Curbelo told her he'll vote for Hillary if indeed The Donald becomes the GOP nominee.

But not exactly, he told the local CBS station — though he's still definitely not ever voting for Trump.

“I told Kim, and Kim is a fantastic person and a good friend from Key West, is that a lot of Republicans, Republicans that I know would vote for Hillary Clinton, instead of Donald Trump," Curbelo said in clarification. "What I’ve said publicly over and over again to the media is I will not support Mr. Trump under any circumstances. That does not mean automatically supporting Hillary Clinton.”

Instead, Curbelo said, he would want to see a third-party alternative candidate in that scenario. But he still didn't exactly say no, when asked again whether he was at all open to voting for Clinton.

“I think in every election everyone, Republican, Democrat, Independent has to ask themselves: Who is the best candidate for this office?” he said. “I could never explain to my two little girls that I would support Donald Trump.”

“I really thought he meant it,” a reportedly disappointed Kim Romano told the station, . “I guess he told me what I wanted to hear.”

Another woman who works at the clinic told the station she witnessed the conversation, and that Curbelo said he would vote for Clinton over Trump — but he might have simply been expressing how much he hated Trump.