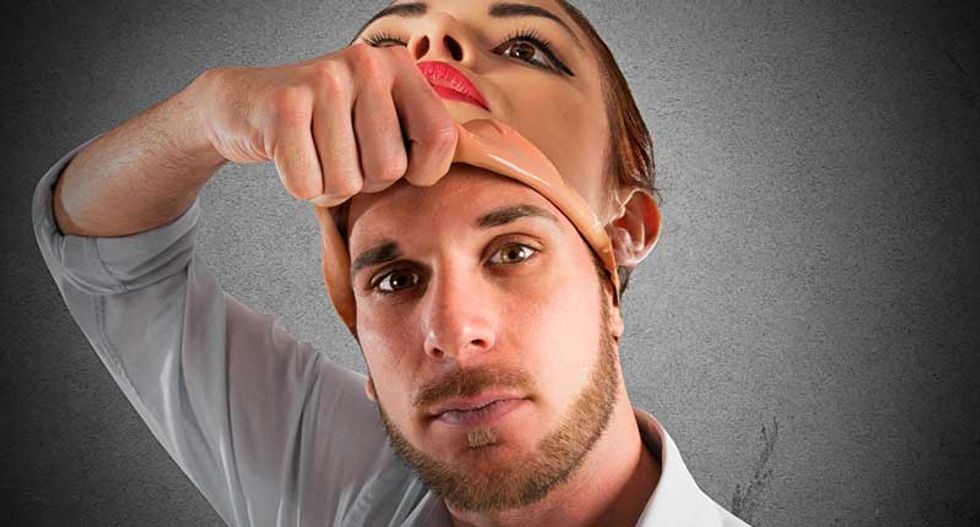 A man takes off a woman's mask (Shutterstock)

The bill, which specifies abortion care should not be mentioned when discussing healthcare options for pregnant women, is now awaiting governor’s approval

Georgia lawmakers have approved state funding of up to $2m for unlicensed crisis pregnancy centers, dubbed “fake abortion clinics” by some advocates.

The bill, which specifies that abortion care should not be mentioned when discussing healthcare options for pregnant women, will now go before Governor Nathan Deal for his signature.

Crisis pregnancy centers (CPCs) are non-medical facilities that seek to counsel women out of having abortions. Many of these clinics have confusing names and advertising that suggest they provide abortion services, and others provide misleading medical information to discourage women from having abortions.

Often counselors will tell women that condoms are ineffective, that they will be unable to get pregnant again if they have an abortion, and that abortion and birth control cause cancer. There are more than 4,000 CPCs in the US and at least 12 states fund CPCs directly .

State Senator Renee Unterman, the bill’s sponsor and the chair of the state senate’s Health and Human Services committee, told her colleagues before their vote on Thursday that crisis pregnancy centers “do a fabulous job because they offer alternative services other than abortion” and that “[i]t’s a better thing for people to have better decisions.” Unterman has said that the these centers provide positive alternatives to abortion and that they help reduce the number of abortions performed in the state through the ultrasounds and counseling they provide.

During debates on the bill, only female representatives spoke in opposition to its passage.

“If you want to decrease abortion, then let’s invest $2m in sex ed,” state representative Stacy Evans said on the statehouse floor Friday.

“We’re going to give $2m out to organizations not even licensed by the State of Georgia to provide medical care in any way?” said Staci Fox, the CEO of Planned Parenthood Southeast. “If this is really about providing access to women, shouldn’t we be concerned about who it is that is giving that access?”

Fox also notes that the bill seems particularly misplaced in the midst of an epidemic of rural hospitals closing throughout the state of Georgia. A 2014 USA Today report found that five rural hospitals in Georgia had shuttered in a two-year period. At that time, an additional six rural hospitals faced precarious financial circumstances.

“This bill prohibits counseling on abortion,” Fox added. “And the last time I looked, abortion is legal in the US – and our job is to make [abortion] safe and legal and not restrict women from accessing a critical part of healthcare. This isn’t about helping organizations provide healthcare for women. This is about restricting abortions.”

The proposal comes as access to abortion services narrows across the south, and a case before the US supreme court tests the validity of restrictive laws that have shut down clinics in surrounding states. According to the Guttmacher Institute , in 2011, 96% of Georgia counties had no abortion clinic, with 59% of Georgia women of reproductive age living in those counties.

When it comes to states providing funding directly to CPCs, historically “there is no requirement to ensure that the information women receive from the centers is medically accurate,” said Elizabeth Nash of the Guttmacher Institute. “It is documented that there are crisis pregnancy centers that provide inaccurate or misleading information to women, and it would be helpful to ensure that the information women receive – especially when provided by public funds – is medically accurate and appropriate.”

“The main crux of the problem is that CPCs project themselves to be comprehensive women’s healthcare centers, and course they’re not,” said Dr Serina Floyd, an OB-GYN and fellow of Physicians for Reproductive Health.

“Women calling wanting to know their options and researching abortion need to have unbiased and medically accurate information. When this is not provided, it puts them in a very dangerous situation. And when it comes to crisis pregnancy centers, not giving women the information they need can cause delays in receiving care – and for something like abortion care, that’s a huge concern.”

Floyd also cautioned that CPC staff may not tell – or have the training to tell – a woman if there is a maternal health indication or a fetal health indication that might lead to her needing or wanting to terminate a pregnancy. “They’re compromising patients’ health by furthering a pregnancy and endangering her,” Floyd says.

Georgia is one of the 28 states that allow production of “Choose Life” license plates ; in Georgia, a portion of the proceeds from the sale of these license plates are donated to agencies or organizations that provide adoption assistance, counseling, training or advertising. At this time, proceeds do not go to specific antichoice organizations or CPCs.