He is 'demeaning' his own wife: CNN's Kate Bolduan eviscerates Trump for wife comparison photos 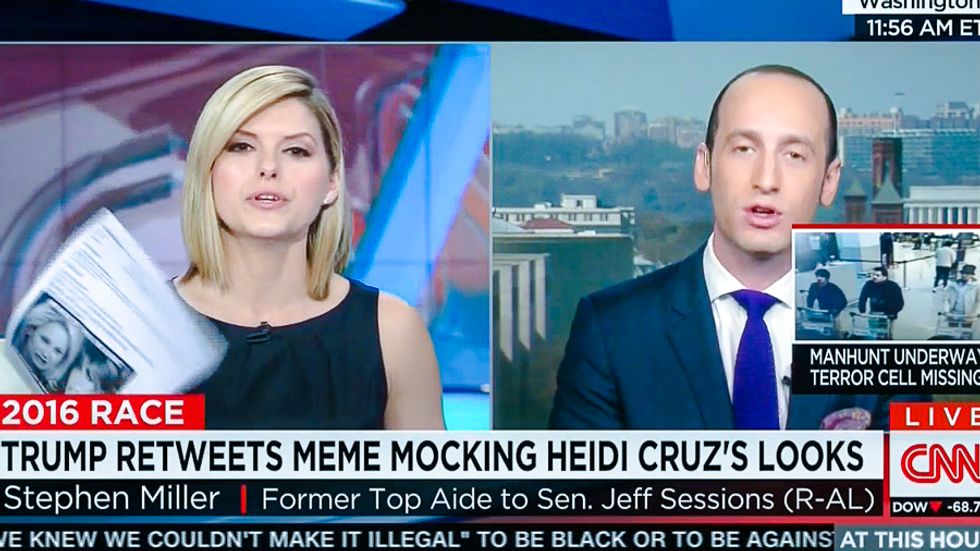 CNN anchor Kate Bolduan pointed out on Thursday that GOP front-runner Donald J. Trump was "demeaning" his own wife by retweeting photos that compared her looks to that of his opponent's wife, Heidi Cruz.

After a group supporting Cruz created an ad targeting Mormons with a 16-year-old photo of Melania Trump posing nude for GQ magazine, Trump fired back with a threat to "spill the beans" on Heidi Cruz.

The conflict escalated on Wednesday when Cruz warned Trump that Heidi was "out of his league." And on Thursday, Trump retweeted an unfavorable photo of Heidi Cruz, comparing it to a glamorous photo of his own wife.

Bolduan, who had sparred with Trump adviser Stephen Miller on Wednesday over the spat, seemed irritated on Thursday that the campaigns had not resolved the issue.

Bolduan added: "I do wonder why Donald Trump continues to want to talk about this. Because as I look at this retweet as a woman, it's demeaning to not only Ted Cruz's wife, it's demeaning to Melania Trump because she's got a lot more going for her than just her looks. And you don't see that in this retweet."

For his part, Miller argued that "the retweet speaks for itself."

"And I think that you and I are probably going to have to agree to disagree on this, which is fine," Miller opined.

"You endorse the retweet then?" Bolduan interrupted.

"Of course, I do," Miller laughed. "That's what's great about America, we're not going to agree on everything 100 percent of the time."

"Yes, you and I are not going to agree on endorsing something that is demeaning to women, including Donald Trump's wife," Bolduan shot back.

"Women also want to be taken for more than what they look like," the CNN host said. "How about this? Tell your boss to stop perpetuating this conversation, and you and I can talk about important things, like maybe how he would handle the threat of terrorism in the face of the Belgium attacks."

"But he continues to just want to retweet this kind of a feud with Ted Cruz so we're talking about that."