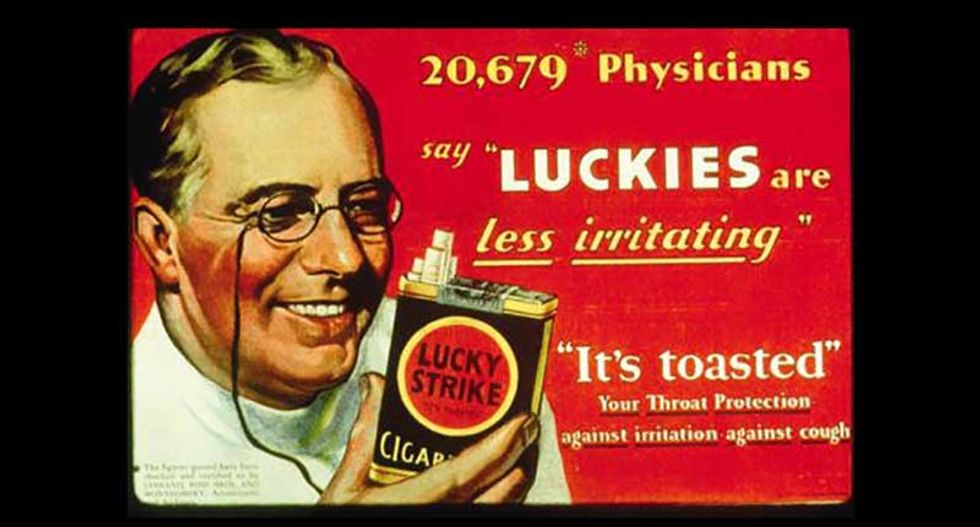 Talk about crazy: Even after the tobacco industry was cornered into revealing in 2007 that it had targeted mentally ill people for decades with fake science and free cigarettes, the puffing continued apace.

Some things did change. Shrinks rarely hand out cigarettes any more as a reward for good behavior, and psych wards are now solidly smoke-free (except in a few holdouts). But mentally ill adults still smoke one third of all cigarettes in the US—schizophrenics* many more than their share—and there’s no simple reason why.

“The effects [of the targeting] are longstanding,” says Stanford psychologist Judith Prochaska, the researcher who dug up the offending industry documents in 2007, unveiling campaigns first devised in the 1950s and enduring all the way through the 1990s.

Two big lies—that smoking relieves the symptoms of psychosis, depression and anxiety and that mentally ill people have a special immunity to tobacco-related diseases—were propagated so aggressively by cigarette-makers that plenty of people still believe them, says Prochaska: “It continues in the culture and in the mental health field.”

Capitalist greed is not quite enough to explain why these particular people keep lighting up, however. Cigarettes do offer a little something special to the mentally ill—and their families and doctors too.

For starters, there’s still nothing quite like a smoke to incentivize a tobacco-addicted inpatient into showing up for an appointment, for instance, or taking his or her medicine on time. A brief visit to the sidewalk will often do it.

And while the clinicians and researchers interviewed for this article all complained about a shortage of funding and training for mental illness-focused cessation programs, they also blamed family members’ objections that “Smoking is all they have!”“In a world where you have mental illness and you don’t have any control, some people say, ‘Well this is the one thing that someone has control over,’” says Jill Williams, MD, who directs the Division of Addiction Psychiatry at Rutgers University-Robert Wood Johnson Medical School. “Of course, I would say that’s flawed logic because the whole definition of addiction is that you don’t have control.”

And then there’s what mentally ill smokers themselves have to say.

“Deprive me of nicotine and caffeine and the results won’t be pretty to anyone around me,” posts “adsixx” on the Icarus Project website. “They can have my pack of Winstons when they pry them from my cold dead hands. For me, it keeps away the nausea from anti-psychotics and mellows out my mood.”

There is a nugget of science in adsixx’s report of queasy side effects, as there is with pretty much every myth about the smoking-psychosis connection. Nicotine’s relationship to dopamine is tricky.

However, “If they quit, they would also have less side effects because they would [probably] need a lower dose of medications,” says Chad Morris, an associate professor in the psychiatry department at the University of Colorado Denver. “When you’re smoking, nicotine metabolizes the drugs quicker,” he explains, so higher doses are often required.

As for the “self-medication” claim that smoking helps with symptoms of psychosis and depression, that one sometimes rings true—but just during an initial rush: “Nicotine does correct for some of the deficits that some individuals with mental illness have, but only for about five minutes,” says Morris.

Of course those five minutes are no small matter in the life of a person suffering with severe mental illness: It’s a reliably chill moment, full of promise that there will be more such chill moments.

Bipolar quitter Deidre Stenard used to smoke three packs a day. “If I was feeling anything,” she says, “I would have a cigarette. As a matter of fact, I would have a bunch of cigarettes. I was kind of a chain smoker. My experience is that my medicine was off, so that was just another reason to smoke more. I was trying to make myself feel better. But that really backfired on me: I was feeling like a beached whale.”

This is common: Except for that five-minute tease, tobacco can exacerbate anxiety or depression, says Morris.

Of course mentally ill people can quit, and they do, with immense benefits.

Stenard figures she has saved $60,000 in not-bought cigarettes since the day she quit smoking—and she throws that figure around a lot at her New Brunswick, New Jersey job as a peer counselor helping other mentally ill people quit through a program called CHOICES. Mentally ill people are disproportionately poor and vice versa. And the current price tag on a pack of cigarettes is no small matter for people living on the margins, especially if they’re unable to work, never mind homeless.

“This is real money,” says Williams, who works with Stenard. “When people quit smoking, they can really can get a cellphone, buy a computer, move, go on vacation.”

But money is not as much of a motivator as you might think for people who are severely mentally ill. Other things can matter more.

Elliott Madison, program director at a mental health service organization in New York City called Fountain House, says of his clients, “They’re poor and they could use money, but the real poverty is in their social relationships. Smoking opens the possibility of limited social interactions, where I borrow a cigarette from you and next week you borrow a cigarette from me and we build a pseudo-relationship based on this need.”

The predictable amount of time that passes between that first flame and a single cigarette’s last ash is uniquely suited to this crowd as well. Fountain House “members,” aka clients, don’t generally have a lot of interest in socializing—many just lack the skills—but “With cigarettes, I know when the interaction is over: when my cigarette’s done,” says Madison.

This insight into why clients smoke has propelled big changes at Fountain House.

Madison estimates that when he first got there in 2000, 55% of clients smoked. The place—a sizable institution now with an active membership of about 1200 and 350 people visiting each day—was an early adopter of “wellness” care and introduced all manner of programs to address health problems not directly related to clients’ mental problems. But efforts to help them quit smoking—patches, gum, pills, e-cigarettes—failed completely.

“We found that people would stop periodically and go back, multiple times,” says Madison. “Not in the traditional ‘Oh, it’s hard to quit’ way, but because of the psychosocial component.”

All that began to change about seven years ago when Fountain House started organizing social activities aimed at teaching smokers to find alternative to smoking’s “psychosocial component.” For example, getting groups of smokers to go out and get coffee or food together.

“The point was controlled, timed-limited activities that were pleasurable,” says Madison. “If I ask you out to a movie, that can mean all sorts of things; it’s not very transactional. That creates anxiety and stress. It doesn’t serve the same function.”

Now only 15% of Fountain House members smoke—just under the national average and way below the usual 35%-plus figure among mentally ill people.

Here’s another important recent discovery in this field: When you’re treating tobacco or other drugs or alcohol alongside mental health problems, the whole project works a lot better. So much for the popular notion that you need to keep at least one crutch handy to support you while you address your other addictions and illnesses. (Think AA and coffee.) On the contrary.

But wow, do we love our crutches, whatever the status of our mental health.

“I’ve told my shrink this: I will try to change just about everything in my diet, add exercise, cut out sugar, try to get sleep on a regular schedule, take meds as prescribed, etc. But my smokes and my tea is off limits,” posts adsixx.

It would be nice to think that the tobacco industry is now laying off this particular population, but Prochaska says no.

“I think it would be naïve to think that they stopped, because we know so many of their tactics continue,” she says. “And if it’s not necessarily allowable [in the US], it still continues globally.”

Prochaska cites the industry’s decision to use color-coding to get around the US ban on “light” cigarette branding—employing colors like blue or silver that are firmly associated with “light” or “mild,” without actually using the words—as an example of the shadiness still at play. “The tobacco industry knows the smoker better than any other and they are still extremely interested in the psychological profiles of smokers,” she says.

The industry is nothing if not adaptive, Prochaska points out, slipping above board and then below as needed. She recalls a 1986 Merit ad with a double image of a cigarette pack alongside this text: “Schizophrenic. For New Merit, having two sides is just normal behavior.” How bizarre that directness seems today (along with the advertiser’s confusion of schizophrenia with multiple personality disorder).

Why quit, you might ask, aside from the risks of lung cancer and heart disease, the nicotine dependency and the depression it may cause? Because everybody else is quitting.

At a time when cigarettes are banned from most public areas, workplaces and now more and more apartment buildings, smoking is yet another barrier to stability and social acceptance, and people with serious mental illnesses can hardly afford any more of those.

Also: Research shows they want to quit just as much as anyone else, according to Morris. And for the same reasons.

A 23-year-old mentally ill New Yorker (who asked me not to use his name) describes his own efforts this way: “I feel like most of the time when I am smoking I am trying on some level to work up the gumption to quit. It’s pretty clearly a bad habit. I don’t really try to justify it beyond saying it’s super-addictive and I am a fallible human.”

* Schizophrenia is a controversial diagnosis and probably more aptly described as people who experience psychoses.

Sally Chew has been an editor at Time Inc.’s Health.com as well as at Vibe, Out and POZ magazines. She also authored a true crime book and was a wire-service reporter overseas.