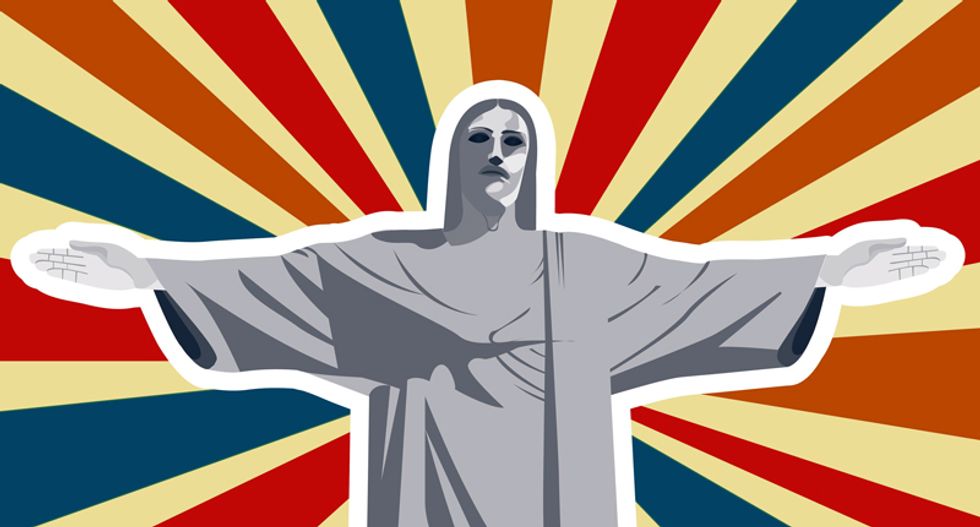 The 2016 annual meeting for the Organization of American Historians (OAH) will feature a session focusing upon the provocative book One Nation Under God by Princeton history professor Keven M. Kruse. In One Nation Under God, Kruse argues that the idea of the United States as a Christian nation does not find its origins with the founding of the United States or the writing of the Constitution. Rather, the notion of America as specifically consecrated by God to be a beacon for liberty was the work of corporate and religious figures opposed to New Deal statism and interference with free enterprise. The political conflict found in this concept of Christian libertarianism was modified by President Dwight Eisenhower who advocated a more civic religion of “one nation under God” to which both liberals and conservatives might subscribe.

Kruse concludes that with the polarization of America in the 1960s over such issues such as school prayer and the war in Vietnam, politicians such as Richard Nixon abandoned the more inclusive civic religion of the Eisenhower era. Kruse writes that by the 1970s “the rhetoric of ‘one nation under God’ no longer brought Americans together; it only reminded them how divided they had become” (274). Arguing that public religion is a modern invention that has little to do with America’s origins, Kruse maintains that contemporary political discourse needs to better recognize the political ideology being perpetuated by the advocates of America as a Christian nation. Needless to say, Kruse’s arguments will antagonize many on the Christian right, as well as many on the left who have employed Christianity as the means through which to implement principles of equality and opportunity as extolled by Jesus of Nazareth, the working-class carpenter.

Drawing upon extensive archival research, the first part of Kruse’s book documents the alliance between religious leaders such as Congregationalist minister James W. Fifield Jr. and businessman J. Howard Pew Jr., president of Sun Oil and a major figure with the National Association of Manufacturers. Working out of his affluent Los Angeles community and congregation, Fifield formed a national organization called Spiritual Mobilization that attracted the support of big business while embracing unfettered capitalist traditions threatened by Franklin Roosevelt’s New Deal policies. The fertile ground plowed by Spiritual Mobilization and Fifield prepared the way for the influential prayer breakfasts of Methodist minister Abraham Vereide and the crusades of evangelist Billy Graham. While the insecurities of the Cold War contributed to the growth of postwar religious fervor, Kruse insists that the prayer movement and Graham “effectively harnessed Cold War anxieties for an already established campaign against the New Deal” (36).

The prayers of the Christian libertarians were answered with the ascendancy of Dwight Eisenhower to the Presidency. While Graham was given a cold shoulder by Harry Truman, the evangelist was welcomed to the White House by Eisenhower, who also supported the prayer breakfast movement bringing together Congressional leaders and members of the business community. While he lacked allegiance to any specific denomination, Eisenhower was a devout Christian who opened cabinet meetings with prayer. Kruse argues that the President endorsed a rather general sense of Christian principles that would unite the nation under a common understanding of its religious heritage. Thus, Eisenhower supported Congressional legislation that added the phrase “under God” to the Pledge of Allegiance while also embracing “In God We Trust” as the nation’s official motto that was included on the nation’s money supply. The Eisenhower administration also endorsed the National Association of Evangelicals call for a July 4, 1953 March of Freedom declaring that the American government was based upon Biblical principles. The concept of “One Nation Under God” was also championed in the popular culture by the creation of Disneyland and Cecil B. DeMille’s film epic The Ten Commandments (1956), while the National Council for Advertising championed Madison Avenue techniques that would bring the concept of God and free enterprise to all Americans on the local level.

Eisenhower’s rather vague notion of a Christian America, however, did not quite coincide with the ideology of Christian libertarianism. Instead, Kruse suggests that actions such as adding “under God” to the pledge were examples of ceremonial Deism; establishing the idea that the First Amendment mandated the separation of church and state but not the separation of religion and politics. Thus, general support for the sacred was acceptable, but not active government intervention that might advance a particular sect. In addition, Eisenhower did not move to dismantle the New Deal; accepting programs such as Social Security and expanding government activity with legislation such as the Interstate Highway Act. Kruse, writes, “Unlike Christian libertarians, who had long presented God and government as rivals, Eisenhower had managed to merge the two into a wholesome ‘government under God.’ In doing so, he ironically undercut the key segment of many of his earlier backers, making their old claims about the ‘pagan’ origins of statism seems suddenly obsolete” (87). Here, Kruse seems to imply Eisenhower had inadvertently sanctified the state and government. Therefore, to criticize the government was both anti-patriotic and anti-religious. This is a fascinating argument, with considerable implications for contemporary politics, but Kruse fails to tease out this idea before moving on to other issues.

Kruse maintains that the religious unity sought by Eisenhower was challenged in the late 1950s and the 1960s as various faiths worried that state advocacy of religion might trample on traditional beliefs and practices. One of the most contentious issues was school-mandated prayer which was deemed unconstitutional in the Engel v. Vitale (1962) decision. Nevertheless, in his majority opinion, Justice Hugo Black insisted that ceremonial Deism, such as prayer before Congressional sessions, chaplains in the military, and “under God” in the pledge, was protected. To the surprise of many church members, a number of religious leaders and the National Council of Churches came to support the prayer decision as a means through which to protect religious traditions from state interference. This approach, however, led to considerable division between leadership and laity; undermining the concept of “one nation under God.”

Seeking to mount a conservative movement against the religious establishment, evangelists such as Billy Graham joined forces with the administration of Richard Nixon to promote a religious perspective that would divide rather than unify Americans. Holding White House religious services officiated by leading evangelical ministers and sponsoring events such as the 1970 Fourth of July “Honor America Day,” featuring a religious service at the Lincoln Memorial led by Graham, Nixon attempted to employ religious nationalism as a means through which to brand those opposing his administration or the war in Vietnam as attacks upon American Christian values. Although Kruse includes an epilogue offering an overview of religion and American politics from the 1980s to the Obama Presidency, he assigns Nixon, rather than Ronald Reagan, primary responsibility for using religion to divide rather than bring Americans together.

One Nation under God is a provocative piece of historical scholarship that will be sure to engender considerable debate at the OAH. It is a work that will antagonize those on the political right who perceive American exceptionalism as a gift from God bestowed upon the framers of the Constitution, while those who embrace the opposing tradition of the social gospel and Christian socialism may also take offense. Religion has played an important role in American history, and some critics will make the case that Kruse downplays the role of the sacred in American life. However, Kruse makes a major scholarly contribution in his examination of how ministers cooperated with big business to formulate an ideology that the New Deal was a threat to traditional American Christian values of free enterprise and individualism while promoting the false pagan deity of statism. As Kruse moves into a discussions of ceremonial Deism with the Eisenhower administration and consideration of how Nixon employed religion to divide rather than unify, Kruse’s thesis regarding the role assigned to corporate America in creating a Christian America becomes somewhat lost, and this ambitious study may take on too much by attempting to survey the relationship between American politics and religion from the New Deal to the modern age.