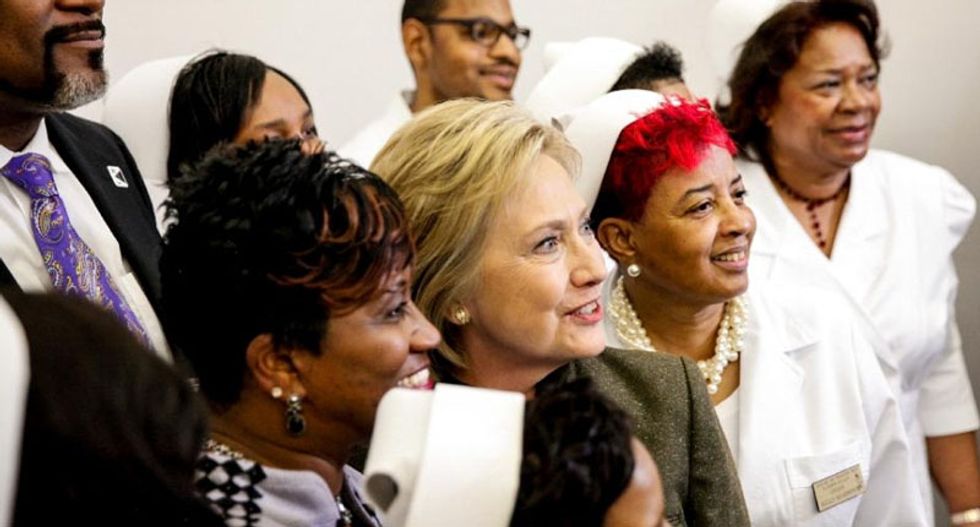 Democratic Presidental candidate Hillary Clinton has her photo taken with nurses at House of Prayer on February 7, 2016 in Flint, Michigan (AFP Photo/Sarah Rice)

Hillary Clinton is on a roll. If her candidacy ever looked in doubt to an insurgent Bernie Sanders, she's hurtling towards the Democratic nomination -- thanks overwhelmingly to African Americans.

A month after her bruising defeat in New Hampshire, where Sanders won every category of voter except those older than 65 and earning more than $200,000 a year, Clinton has chalked up massive wins.

In Alabama, Arkansas, Georgia, Louisiana, South Carolina, Tennessee, Texas and Virginia she romped to victory, and is tipped to win Tuesday in Mississippi and Michigan, which all have sizeable African American communities.

Black voters have become critical to winning US elections. Without decisive African American turnout in seven states, Barack Obama would have lost to Mitt Romney in 2012, the independent Cook Political Report found.

Four years later with the country embroiled in debate about police violence and systemic racism, blacks are voting overwhelmingly for the former secretary of state, and cold shouldering the white-haired democratic socialist. But why?

Both have called for criminal justice reform demanded by the Black Lives Matter movement, although the group has endorsed neither candidate.

But beyond that, experts say Clinton more than Sanders has talked often about racism, white privilege and the need for more opportunities for blacks.

"I will do everything that I possibly can, to not only do the best to understand and to empathize, but to tear down the barriers of systemic racism," she told Sunday's Democratic debate in black majority Flint, Michigan.

Clinton raised the specter of environmental racism, questioning whether the lead-contaminated water scandal in Flint would have happened in wealthy suburbs.

"She talks very forcefully about these issues in a way that she hasn't before and you don't normally have from presidential candidates," said Stefanie Brown James, Obama's African American vote director in 2012.

While Sanders has spent his career in Vermont, where only one percent of the population is black, Clinton was first lady of Arkansas for 12 years, taking on a prominent role in trying to improve health and education.

In the south, she ran legal clinics representing disenfranchised people.

While still a student at Yale Law School, she went to South Carolina to investigate juveniles in adult jails and to Alabama to investigate segregation in schools for the Children's Defense Fund.

After more than a generation on the national stage, all of this has become common knowledge -- particularly among blacks.

In South Carolina, she addressed the nation's oldest black sorority, dressed in green -- a courtesy to an organization whose colors are green and pink.

"That's the kind of little stuff, the attention to detail that people notice and appreciate," said Andra Gillespie, an associate professor of political science at Emory College in Atlanta, Georgia.

Right or wrong for a feminist campaigning to become the first woman president of the United States, experts also agree that much of her appeal stems from her marriage to Bill Clinton.

The Clinton record is not unblemished. Bill Clinton's 1996 welfare reform and 1994 crime bill are blamed for fanning poverty and record incarceration rates which have hit blacks disproportionately. Both Clintons have since expressed regret, but the former first lady has been called out repeatedly on the campaign trail over that troubled legacy.

Clinton prefers to recall the economic growth during her husband's 1990s administration as a legacy she will continue.

For more than a generation black Americans embraced the Clintons as a couple who worked against racial prejudice and presided over economic prosperity, at a time when black unemployment fell and incomes rose.

He supported affirmative action, appointed a record number of African Americans to his cabinet and was close friends with business executive and civil rights figure Vernon Jordan.

While Clinton's rival Sanders has spoken of being arrested during the 1960s civil rights movement, his plea for votes has focused far more on economic inequality.

"That's the problem that blacks typically have with white progressives, that they look at everything through class and forget that race still matters, and it's that type of framing that has frustrated some blacks," said Gillespie.

African Americans who agonized in 2008 about whether to vote for Clinton or Obama and picked Obama now feel they can do right by Clinton, the woman who has gone out of her way to present herself as Obama's heir.