How the reality of Trump's America outpaced Netflix's 'House of Cards' 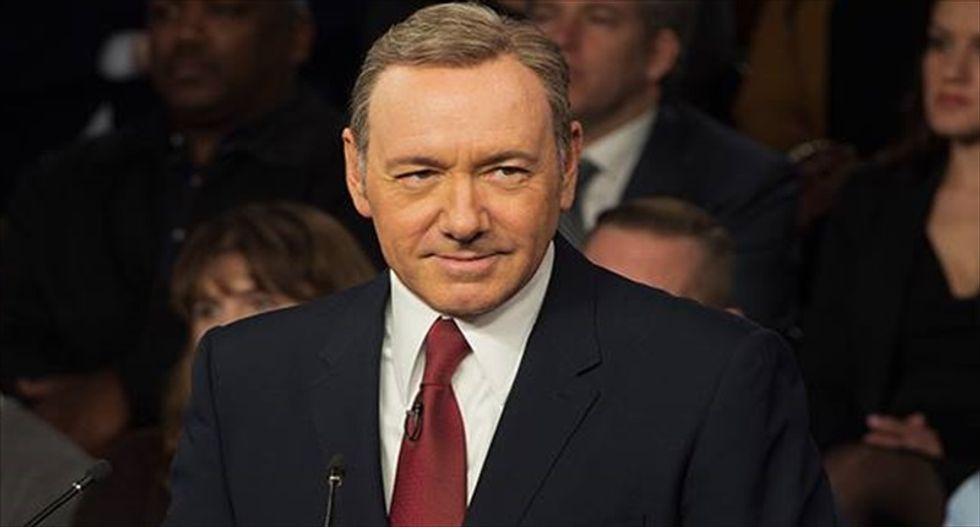 Spoiler Alert: Read ONLY if you have watched the fourth season in full

Netflix’s House of Cards made its name by shocking and thrilling viewers with its political chiaroscuro and seductive cynicism. The show’s gorgeous cinematography emphasized Washington’s clean lines and sharp edges. The only dirtiness was Frank Underwood’s, and his filth was philosophical. He’s a pseudo-Shakespearean devil, a cunning exploiter of defects. The only character more compelling than Frank is his wife – Robin Wright’s magnificent turn as Claire Underwood exposed the metastasizing ambitions of a political partnership, and her riveting trajectory resonated with real events. Through Claire, the show implicitly theorized the bitter and intoxicating vertigo of being – and becoming – Hillary Clinton, the brilliant ally and eventual political equal of a sweet-talkin’, power-hungry southern man.

That’s all to say that House of Cards was fun and dark, but also – and this is the key term – it was relevant. It no longer is.

The Underwood cunning is still fun to watch; this latest season is at its best when Claire starts methodically destroying Frank’s plans in favor of her own. But something important is missing from the show’s fourth season. That grim, satisfying resonance with the present is gone. Frank and Claire’s perspective feels obsolete and the parallels with current events are uncharacteristically weak.

Take the House of Cards version of Isis, ICO: compared with its horrifying real-world counterpart, ICO comes across as a sad joke. Yusuf al-Ahmadi, the prisoner with whom Claire negotiates, even half-admits that while his anti-Americanism is genuine, his religious attitudes are more expedient than real. The teenage recruits don’t inspire horror. They seem banal, about as shocking as the last mass shooting (can you even remember which was the last one?).

Just as the show’s villains seem unimpressive, its emergencies, too, seem out of step with our own political realities: gas, for example, is at an all-time high on the show just when prices in the real world have plummeted . As for the election? The shenanigans to which the Underwoods resort to get Claire nominated as vice-president are tame compared with the events of this primary season .

It’s amazing: House of Cards, that venomous riff on the evils of American politics, suddenly scans as not just retro, but naive.

This should worry us. House of Cards’ failure to land is less an index of the show’s shortcomings than a sign of our political environment’s decay. Perhaps when the show began we were still capable of being scandalized. Political mistakes still had consequences. Lying politicians were censured. Or perhaps we simply believed it?

In any case, we surely no longer live in that reality.

The fact is, Frank’s finesse is passé. His moves depend on everyone playing according to the same rules – or at least sharing basic assumptions. We don’t. The show’s inability to reflect the current state of American politics arises from the idealism of its central premise: that cleverness matters and manipulation and diplomacy are essential to political success. Without them, you run the risk of being investigated and punished – or taken to task by an electorate who cares. Speech matters. Truth matters. Newspaper articles matter! People in Frank’s United States might actually read Tom Hammerschmidt ’s exposé – and act.

House of Cards believes that the beheading of one American on camera would scandalize a nation into war. But how many Isis beheadings have there been? How many African American men shot on camera by police? How many black protesters assaulted at campaign rallies? We are no longer capable of shock or awe. Compared with ours, the Underwoods’ United States is strikingly innocent.

This is a moment when a candidate for president gained support after being endorsed by a Ku Klux Klan grand dragon – a man who, rather than immediately distance himself from David Duke, first pleaded ignorance and then blamed a bad earpiece. In a political landscape that ugly and brash, Frank’s panic over a photograph of his father with a Klan member seems positively Victorian.

This devil has his advantages if all politicians lie: Trump’s lies are better because they aren’t strategic. He’s rich, so he won’t lie to you to please special interests. He’s not a politician, so he won’t lie while planning to compromise with his colleagues in Congress the next day. He may be a liar, but he’s lying to please and entertain you – the angriest, least reasonable version of you there is, the you you’ve suppressed. There are times when he’s appealingly authentic: like George Costanza says, it’s not a lie if you believe it. And Trump believes it because you believe it. If you’re driven by nothing but ego and applause, you’ll love Mexicans one day and call them rapists the next; first you were in a room with Mexicans and then you were in a room full of xenophobes. The applause shapes what you say, and you can believe whatever you just said. Until it’s better to believe something else. As far as scandal goes, why spin when you can just deny?

This is why no attack on Trump works: his supporters already know he lies constantly and contradicts himself on a whim. That’s exactly why, in this extraordinary nihilistic moment in American history, he’s getting their vote.

That America bears no resemblance to the one the Underwoods inhabit. Faced with a similar scandal – the revelation that his father was photographed with a Klan member – Frank tells a story with just enough veritas to mollify an American public that requires truth: his father needed to save the family farm. He goes to a black church in his home town of Gaffney and gives an effective, extremely rehearsed speech. “On a morning like this, in a church like yours, I’m proud to be a South Carolinian,” he says, thickening his drawl to a syrup. The speech is perfect and cynical, and it works.

I wondered, watching Frank work so hard to spin that photograph, if House of Cards has contributed to making its own political commentary obsolete. As fictional exposé, did it help catalyze the widespread rejection of the political establishment? We are allergic to polished speeches now. The West Wing educated us on the procedural details of American politics even as it inspired and entertained. House of Cards has done the opposite . It drives home the point, time after time, that for politicians the people are never a priority or even an afterthought.

That belief is spreading from the American public to politicians themselves, who today seem not just immune to but enraged by the arcane procedures that have made the United States run – the protocols that made Frank’s scheming possible. Frank’s deviousness just isn’t loud enough in a political landscape where tantrums trump process, where Senate Republicans – to choose one example – can announce that they will not even consider Barack Obama’s nomination to the supreme court. Process be damned.

What happens now that House of Cards has become a sunny version of the material it intended to make dystopian?

In tone, House of Cards could have matched the darkness of this particular moment. Imagine a season in which Claire’s aspirations are allowed to gain some momentum; where the fact that she starts to dress like George Washington pays off.

This season could have ended – as the original BBC show did – with Claire murdering Frank for the sake of his own legacy. When Frank calls her, panicking over the forthcoming article from Hammerschmidt, I imagined that her dangerously blank expression concealed a plan: she’d kill Frank with morphine, just as she killed her mother.

Whatever scandal ensued from the article would be deflected, spun as an attempt to smear a man who gave his life for his country. She would run for president on the strength of Frank’s death, and she would win.

That’s a dark ending. It severs the show’s vexed relationship to contemporary events and it cuts its connection to Frank, whose survival at this point – it pains me to say it – is dragging it down. For House of Cards’ version of Macbeth to reclaim its status as tragedy, Macbeth has to die.