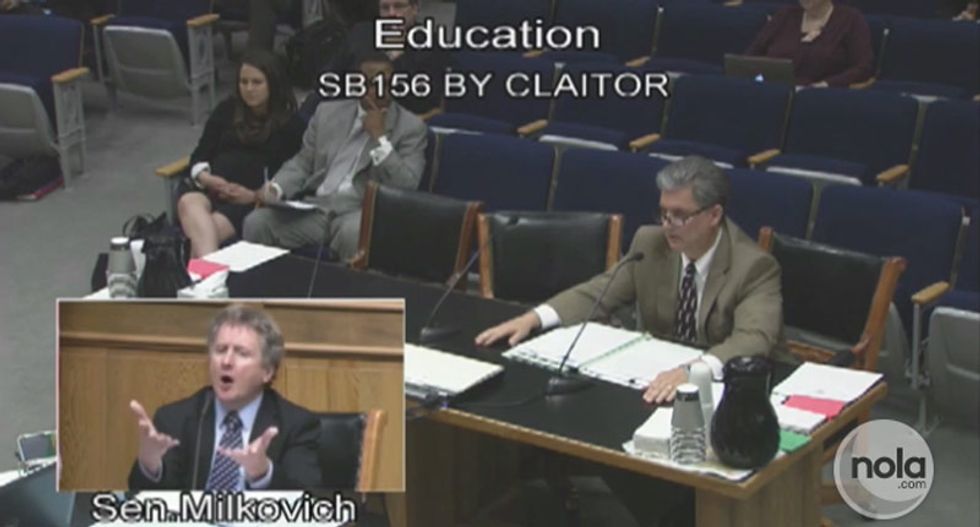 Louisiana state Sen. John Milkovich appears to be the kind of Democrat who hasn't been seen for quite a while — since William Jennings Bryan at the Scopes Monkey Trial — arguing at a meeting Tuesday night of the state Senate Education Committee for the scientific teaching and accuracy of the Bible over evolution.

The measure was brought forward by Republican state Sen. Dan Claitor, as part of an overall effort on his part to have the state clean up its law books by repealing various acts that have been found unconstitutional.

But as The Times-Picayune reports, the committee voted 4-2 to keep the state's unenforceable "Balanced Treatment for Creation-Science Act," which was passed in 1981 and stuck down by the U.S. Supreme Court in the 1987 case Edwards v. Aguillard.

And during that hearing, Milkovich was the most passionate advocate for creationism. At one point, he asked Claitor, "if you are equipped to acknowledge this, or have the background that in fact, scientific research and developments and advances in the last hundred years — particularly the last 50, 20, ten years — have validated the Biblical story of creation," through archaeology of ancient civilizations, and even the discovery of Noah's Ark on a mountaintop.

Milkovich also added that "the notion of instantaneous creation has been validated by the scientific study of heliocentric circles in rocks."

(Note: On that last point, Milkovich might have been referring to radiohalos in rocks, a phenomenon that is often seized upon by creationists to insist that the Earth is only 6,000 years old. The word "heliocentric" refers to the idea that the Earth revolves around the Sun — but maybe it's just good to have an indication that he accepts that, and not ask any further questions.)

"I'm not looking here to engage with you in a debate on what my religious beliefs are, and how many times I go to confession in a week — which, probably, during session I ought to go more often than what I do."

Also during the hearing, Milkovich said it was a violation of academic freedom to not teach creationism, calling it a "skewed, one-dimensional" approach.

And in a later discussion of a completely separate bill, Milkovich circled back to creationism by linking an alleged decline of morality in children to taking God and the Bible out of schools.

Milkovich, who was elected last November in an upset in a heavily Republican district, seems like an odd fit for a modern Democrat. On his official Web page at the state Senate, he declares: "My priorities this term include strengthening our Second Amendment protections; defending traditional marriage; fighting abortion; working to get rid of Common Core; protecting the right of citizens, including principals, teachers and coaches, to express their faith."